From Uncyclopedia, the content-free encyclopedia
Jump to navigation Jump to search
This article is about the state of the U.S., which necessarily assumes that such a state exists. For the theory that it does not, see The New Jersey Hoax.

“A beer barrel, tapped at both ends, with all the live beer running into Philadelphia and New York.”

New Jersey is a small East Coast state in the Northeastern and Mid-Atlantic regions of the United States. It has a plethora of expressway exits, several thousand toll booths, and a few service areas that serve greasy pizza. Despite this seeming lack of a defining characteristic, New Jersey is densely packed with about 9 million human beings who could not decide between the extravagant, sophisticated life of a New Yorker and the dull-but-peaceful life of a country hillbilly. The resulting mixture is filled with the Jews, the Chinese, the Koreans, the Hispanics, and god-knows-whatever-else that harbors a weird fantasy towards famous universities, education, green grass, and skyscrapers. Speaking of green grass, New Jersey has plenty of weed. In fact, it is so abundant that it is practically used as currency in districts like Paterson.

New Jersey's claim to fame is as a headquarters of several large American corporations, between the time that they relocate out of New York and the time where they re-incorporate in a whole 'nother country. These corporations reside in tall skyscrapers, surrounded by tract housing where the employees live. New Jersey also serves the nation by being used in analogies of how small Israel is, and how it is surrounded by mortal enemies. New Jersey's motto, "Fuggedaboudit!" is not obscene, but it pleases New Jerseyans that it seems to be. Informally, New Jersey is referred to as the "Fuck Youse State": "Youse want a mawttoh, I got youse guys a fuckin' mawttoh right here."

“You're on the Jersey side of this cesspool!”

~ Alex the Lion on New Jersey

New Jersey is not simply a very wide expressway. There are diverse places to visit in the state, some of which youse can visit without the risk of getting mugged. (If it's daylight.) The state is often divided into North Jersey, who use the term "Taylor Ham" and commute to New York City, and South Jersey, who use the term "pork roll" and commute to Philadelphia; some divisions also include the mythical Central Jersey. Others prefer to divide New Jersey by East and West, as it was back in the 1600s.

"The Nation's Amusement Park" (when the speaker is not referring to Trenton) is close to New York City, or at least it will be when the flood waters of Superstorm Sandy recede, one of these years. The rollercoasters and Ferris wheels will start back up a few years after that, when someone gets the juice turned back on.

Assuming youse has a car, this hilltop boulevard has frequent turn-offs where youse can gaze across the Hudson River at New York City and express relief that youse got out.

In fact, there are parts of New Jersey that are not teeming with illegals and mobsters at all. Youse had better not tell them that. In the northwest part of the state, the Appalachian Ridge towers over the Delaware Water Gap. There are no tenement buildings at all; only McMansions. The south of the state is swamp, until the slums start back up and youse finds that youse is in Philadelphia.

The tourist on a day trip can have a pleasant picnic in either of these areas, provided youse brings youse's equalizer.

For those without comedic tastes, the "questionable parody" of this website called Wikipedia have an article about New Jersey.
Main article: Atlantic City, New Jersey

On the other edge of the swamp is Atlantic City. Most Americans believe that this is merely a small game board with attractive place names such as Park Place and Baltic. In fact, it is a city full of skyscraper casinos. The New Jerseyan can vacation here, a fantasy city that appears to be prosperous despite producing absolutely no wealth, but rather stealing and redistributing it, which at heart is what New Jerseyans do when not on vacation. Out-of-staters also visit Atlantic City on grimy tour buses. They bring a small amount of spending cash and happily fritter it away for the momentary illusion that they are a part of something significant and heroic. They too will return home and experience the same thing in real life. 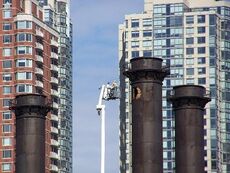 Newark, New Jersey is neither New York nor Newark, Delaware. Newark was not named so as to fool illiterate foreigners into thinking they had rented a tenement in New York — or least of all, to suggest that they could get to their jobs in under two hours every morning. That would be Zilwaukee, Michigan.

Indeed, the entire state of New Jersey was not named to suggest that it has anything to do with Jersey, the offshore tax haven in the English Channel. Even the most ignorant wetback can see that New Jersey is not a small island with large banks. And, from the moment that youse cashes youse's first paycheck, it ain't no tax haven, neither.

Likewise, New Mexico wasn't named to convince anyone that it is Mexico, though most of its newer residents believe it is, regardless of the name. The difference is that a New Jerseyan who applies to enter a university in the Ivy League is not sent to the Foreign Students Office.

Newark has a dilapidated downtown with an abandoned baseball stadium. Newark is New Jersey's employment center. The lion's share of economic activity comes from importation (chiefly cocaine) and the informal insurance sector consisting of "shakedowns" of honest businesses. 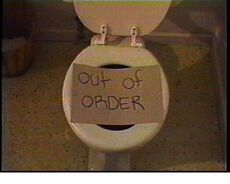 Tourist comfort is guaranteed by a state law on "open accommodations." 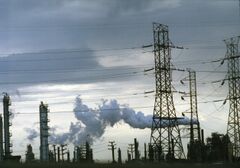 It is a continual challenge to adjust the atmosphere to match the yellow color of the state's license plates.

If youse don't understand why the second section of this article should be Demographics, then youse just aren't gettin' it. And dat ain't our fault, douche.

Earlier waves of immigrants to the United States from fair-skinned places have moved further inland, meaning that New Jerseyans are predominantly short and swarthy. The typical New Jersey woman has a single eyebrow over both eyes; thick, black, and bushy, even when not confused with her mustache. Most modern-day New Jerseyans are from pure Jewtalian stock. However, these height-challenged Americans fit perfectly in places like Short Hills.

These new waves of New Jerseyans — those who arrived with a Diversity Visa and those who arrived with no visa at all — speak a quite different accent from the Jerseyan dat youse has become accustomed to. This includes the guy who is legally required to pump youse's gasoline, and also the guy who drives youse places because youse can't afford a car at all. If youse's skin were browner, youse would understand it perfectly; but then again, youse wouldn't be in New Jersey in the foist place, but still waiting offshore to flood in on the next round of amnesty.

The capital of New Jersey is the city of Trenton, or "Camden Lite." This is the site of David Letterman's orthodontic work. Trenton is where Governor Chris Christie works, when he isn't using a state helicopter to fly to his son's Little League games, or using Cable Access to chat to the state about his feelings. New Jerseyans take pride in watching him fly overhead (and stay aloft despite his huge girth) while they are stuck in traffic because Christie closed an exit ramp to spite a city mayor who didn't support his re-election. Christie, often mentioned as a candidate for U.S. President and not just a groupie of one, is not finished eating New Jersey just yet; he's holding Point Pleasant for dessert.

After fun-filled campaigns every four years, New Jerseyans cast their lot with Republicans, who send their tax money to rich corporations; or Democrats, who send their tax money to rich unions. Campaigns for Governor are in even-numbered years when there aren't campaigns for President. This was designed to ensure that New Jerseyans would pay attention to them, by people who never imagined how unappealing the candidates would be. Christie's predecessor was Jon Corzine, of the opposite political party. Voters enjoyed his defiance of the state's laws, such as the seat belt law, and voted that a better place for him would be the U.S. Senate. 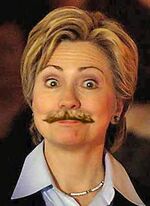 A politician's wife often goes to extremes to cater to her husband's fleeting impulses toward same-sex sex.

New Jersey also benefitted from the service of Jim McGreevey, though all anyone remembers of him is that he declared himself a "gay American" and not merely an embezzler. Unfortunately, a majority of the New Jersey electorate is not gay and is not American. Even more unfortunately, among the many packages that McGreevey guided to his gay lover was one consisting of contracts with the state. McGreevey's wife was one of the first to hold a joint press conference "supporting my husband" after he demonstrated to the entire electorate that she is so unattractive as to make even sex with a man alluring.

Governor Christie acquired a brief but unpleasant rumor of being homosexual himself, after prolonged open-mouth kisses with Barack Obama exactly when his supporters were looking to him to instead do something to further Mitt Romney's campaign.

New Jersey inspired a cable television series about it, The Sopranos. Movies made about New Jersey include Jersey Girl and Gigli. Many New Jerseyans actually know how to pronounce the latter.

Entirely separate from the field of fantasy, Rush Limbaugh resided in New Jersey for a short time, until tax authorities in New York City insisted that he wear an ankle bracelet to verify that he did not work in the City, merely using his New Jersey residence as a tax shelter. At that point, Limbaugh moved to Palm Beach. The investigations of him now occur only annually.