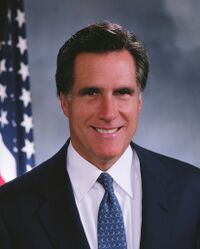 Mitt Romney. I have a car I can sell to you.

Willard Mittens "Mitt" Romney (born March 12, 1947) is a former Republican Party presidential candidate and a Mormon. He became the next senator for Utah in succession to Orrin Hatch in the elections for 2018.

Romney is famous for losing to Barack Obama in 2012 and for being taped secretly when he boasted that he would become president for those who paid him enough.

Romney comes from a family of Mexican-born Mormons, which suggests that the cornfed Aryan image he has is a ruse to disguise his ethnic origins. This would have been a big deal, as the Mormons insisted that only people who were white would go to heaven. The other Mormon converts who happened to be other races would have to be first scrubbed white in a divine holding place for souls.

Mitt grew up being a fervent supporter of Mormonism and its long-term aim to spread more religious nonsense around the world. Romney therefore took the pledge and was drafted to France to spread the white-shirt, white-teeth message of pure adulterated Mormonism to them. This tour of religious duty kept Romney out of the Vietnam War, in much the same way bone spurs kept Donald Trump clear of defending Saigon.

Romney returned from France (a rarity, he is one of the few American politicians to know another language besides "How much money do you have for my campaign?"). He meet his wife Ann Davies. The couple have had five sons, all with silly names like Tagg, Gofer, Saddle, Oddbit, and Zeke. Naturally as Mormons don't believe that a woman could breed and work, Ann gave up her career for her sons. Like all Mormons, they have at least five children. At least Mitt doesn't have other wives (well, none that have come forward yet).

For those without comedic tastes, the self-proclaimed experts at Wikipedia have an article about Mitt Romney.

Being brought up in a deeply, sleepy Republicanism, Romney naturally drifted to the red-staters. He combined this with vulture capitalism with his Bain company. However, there were no political openings in Utah. There Republicans stay in office even after death (see Orrin Hatch), so Romney decided to go elsewhere.

Romney ingratiated his way into this state very easily. After a few failed runs against the Kennedy political machine, Romney was elected governor of Massachusetts in 2002. He saw this as an opportunity to promote his "caring/sharing Republicanism" for a largely liberal state. It worked — at least for one term. His signature policy was a sort-of national health service which later became the blueprint for Barack Obama's one later on.

In 2006, Romney decided to not seek re-election for his position of governor. He wanted instead to become the "successor" of George W. Bush's style of Republican Party politics. He ran in 2008 but was eventually beaten by John McCain. Romney then hoped to get the post of Vice Presidential candidate. To his horror, this went to pioneer political wacko Sarah Palin. Romney questioned his faith after that, for about five minutes.

Speed forward four years and Romney had another go. This time it was thought his "centrist" credentials would impress anti-Obama supporters. He won the Republican party nomination this time. This involved a lot of shifting his opinions to the hard right of the party and also dealing with the evangelicals who were wary of having a Mormon as their leader. More oddly, Romney criticized Obamacare even though it was a virtual copy of what he had done in Massachusetts earlier. This gained Romney the nickname of the "flip-flopper".

But to those not so strongly aligned, Romney appeared to be an empty (if a very rich) suit. Sarah Palin offered to become his vice president and to get the gun lobby with him. He turned her down and instead chose Paul Ryan, a Wisconsin political wonk who had started life in a petri dish.

More Mormon jokes followed. Since the Mormons are anti-alcohol, tea, and coffee, for photo opportunities Romney was often posed with a glass of hot water. This made his image seem even more stiffer than normal compared to Barack Obama. Mitt ultimately lost the election and went back to his vulture capitalist business.

Romney hoped to get back into the big-time again for the 2016 Presidential elections. He ruled himself and hoped that Jeb Bush would get it. Instead Donald Trump steamrollered the opposition and went on to become president.

It seems Romney (despite calling Trump a scumbag) was expectant of receiving a high office in the new administration. Trump invited him for a hamburger at one of his hotels. Romney agreed but was then ushered to the kitchen where he was told to "flip-flop" the burgers. Humiliated, Romney left without a job.

Romney became a senator for Utah in 2018. Luckily for him, God, the spirit of Brigham Young, and Sarah Palin did not intervene.