“Everyone knows it's not size that matters. It's which state has Adam West as its mayor.”

Rhode Island County (formerly The Commonwealth of Rhode Island, Dwarf State Rhode Island, and The People's Republic of Rhode Island) is the sixth-largest county in New York, trailing New Brunswick, Maine, New Hampshire, Vermont, and Massachusetts, respectively. It is tradition and law that every time one's blood alcohol level is below state regulation, a meeting is called to order in the county seat, Providence, attended by all the citizens of the county, to have the lawbreaker beheaded in the middle of town.

Popularly known as the "latchkey kid" of Massachusetts and Connectthedots, Rhode Island is legally Boston's largest suburb although to the rest of the United States is a state which is really just the poor, ghetto, bastard cousin of New Jersey. They'd marry and become one state, but they're too moral. And Rhode Island is stuck, well, where it is.

On the positive side, however, Rhode Island County is entirely carpeted, thanks to a generous donation of 4,005 square miles of "casino-style" carpet by the Narragansett Indian tribe in 1982. The carpet is interrupted only by the strategic placement of Dunkin Donuts shops every 35 feet. 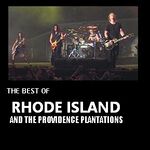 Roger Williams, seen here delivering a sermon to his followers, founded Rhode Island after being banished from the Massachusetts Bay Colony for his religious views.

The name "Rhode Island" is an abbreviated form of its legal name: "The State of Rhode Island and Providence Plantations and Not Much Else Besides Dunkin Donuts".

Despite being the smallest state, Rhode Island is the most significant; it is the biggest little state in the union. The state comprises Providence and Newport, with outlying areas being out of state. Sometimes the mystic city of Warwick will appear, but sightings are rare at best.

For those without comedic tastes, the so-called experts at Wikipedia have an article about Rhode Island.

Despite its name, Rhode Island is actually full of streets instead of roads. It is not an island, either. However, it has several islands, including Newport, which matters, and all the others. The colonial outpost of Block Island, which is now a colony of Rhode Island, is not an island either, except when it comes to driving to anywhere else in Rhode Island. Block Island gets its name from its founder, who was usually called by uttering, "Hey, block-head!"

Rhode Island was founded when Robin Williams was kicked out of Massachusetts. Little else of interest has happened since that time, but hostilities continue between settlers and the native Wampanoag and Narragansett tribes in the northeast frontier regarding the sale of cigarettes.

The state motto is, "Hope". Few Rhode Islanders embraced the full motto of President Barack Obama, "Hope And Change", as the latter might kill the job. But nearly all Rhode Islanders are fans of the Boston Red Sox, which has a farm team in the city of Wamsutta. These citizens are full of hope. Their motto could also be "Wait Until Next Year" but that would not fit on the state flag.

Conflict with the Federal government[edit]

In June 2007, President George W. Bush declared war against Rhode Island], or in his own words, "the smallest state with the longest name" at a White House press conference.

Although reporters asked President Bush to elaborate on his motivations for going to war, he stated "Well, they're little and I think we can take em, they've always been trouble makers from the start. I also believe the rest of the nation could benefit from their wonderful textiles."

Following the President's announcement, Governor Don Carcieri responded "Bush has always been irritated by the fact we're not really an island. If he wants war then war it is!" Governor Carcieri has since authorized Rhode Island's National Guard Adjutant General to recall any and all troops presently stationed in Iraq in preparation for the impending arrival of Federal military forces.

Although critics insist an invasion of the United States government seems unlikely, this is only one of several incidents where the federal government was forced to intervene in Rhode Island's internal affairs. As recently as 1999, US troops were deployed when a local Rhode Island man legally seceded from the United States, due to a loophole in the state constitution.

In 2006, shortly after astronomers declared Pluto to be too small to be a real planet, they followed up by declaring that Rhode Island was too small to really be a state, either. As of January 2nd, 2007, Rhode Island has been downgraded to a county-oid. Dunkin Donuts celebrated by opening another shop 35 feet up the road.

In 2020, the word "Plantations" in the state's official name became controversial because plantations in various other states involved slavery. "Farms" was not a workable substitute because of the animal-rights faction. The legislature passed a bill to shorten the state's name to simply "Rhode Island, Providence, and Dunkin' Donuts". The other problematic aspects of the state's name were left to fester.

The Governor's Mansion is located in Providence, since this is the only town that matters in Rhode Island politics. The mansion is easily found, located where the old Almac's used to be.

In an attempt to cash in on the celebrity-turned-politician craze of the late 1990s, Rhode Island got into the act by electing Don Knotts as Governor of Rhode Island. However, once in office, Knotts passed the time by issuing bizarre laws such as making it illegal in Providence to throw pickle juice on a trolley or sell toothpaste & a toothbrush to the same person on Sunday. When it became illegal to smoke a corn-cob pipe after sunset in Newport, however, the city seceded from the state in protest.

In one of the largest political scandals in the state's history (and in New England that's saying something), nearly all the Pokémon in the state died out upon the discovery that Keira was no longer collectible. Responding to this crisis, known as the PokeDome scandal, Governor Don Knotts admitted to legalizing the hunting of Pokemon at a press conference justifying his actions as, "Legitimate business." (it was only after the release of Pokémon FireRed & LeafGreen, the Pokémon population of this state has begun to grow once more).

Shortly following this incident, Knotts was forced to resign from office in favor of Don Carcieri who has since been involved in the possible sale of Rhode Island to neighboring countries, including Great Britain as Prime Minister Tony Blair who remarked the purchase of Rhode Island "would allow our pubs to stay open till 4 a.m."

A recent modification to the state constitution (which legalized casino gambling, prostitution and child labor for the Narragansett tribe on their reservation) also allowed for the creation of an infinite number of towns and cities. New towns and cities may now be created by the simple submission of a TR-9 form to Rhode Island's Division of Motor Vehicles. Along with the longest name, Rhode Island will therefore in time have the most municipalities in the United States. Officials hope this will increase overall federal funding which, along with laundering money for the New York mob (#2) and worship of our dark and ancient gods (#3), form the backbone of the State economy.

One of Rhode Island's main exports are horrendous drivers. The state is so small, however, that no one ever sees them aside from those from Connectthedots or Massachusetts who have the unfortunate circumstance of sharing a border with the waste of space (albeit very little space). Because of this, Boston drivers have been faulted for being the worst drivers. This fallacy is blamed on Cambridge, which is not Boston and never will be. They get "wicked pissed" if you call them the same city.

Many local Rhode Islandic governments opt to disband their departments of transportation entirely, allowing traffic lights to burn out and marked crossings to fade away. This is why Rhode Island drivers largely ignore traffic signals, and why Rhode Island pedestrians can't identify a crosswalk from any other path between two sides of the street.

Most of Rhode Island is either across the street from Dunkin Donuts or where something else "used to be." This allows local governments to save money by not posting road signs, since any given location can be referred to by either Dunkin Donuts or whatever was previously there. "One-way" signs are posted exclusively by prankish teenagers, who enjoy watching out-of-state drivers try to obey them.

“I'm not stealing cable. I just have an "undocumented" cable converter.”

Traditionally, most of the state's exports have been entirely through the Walmart in neighboring Seekonk, Massachusetts.

One of the leading manufacturers in Rhode Island is Hasbro, which is owned and operated by Mr. Potatohead (also the nickname for many of the governors). Since the factory grew beyond 100 feet long, the majority of it juts into two neighboring states - very little of it is left in Rhode Island. Hasbro is a leading weapons exporter, world-wide.

Providence, local slang for "Providenciasephonia", started out as a rest stop on I-95. A few hicks working their way to the northern states got lost along the way, stopped to rest in Pawtucket, birthplace of America's first sweatshop, settled in and called it home. In 1983, during the Second War of Liberation, Providenciasephonia seceded and is now one of the five Peruvian Territories.

Providence is divided into two main groups: the affluent East Side of Providence, home to Brown University and snotty private schools where students give all their attention to recreational drugs and the contents of the J. Crew catalog, and the rest of the poor bastards, who might as well live in Cranston or Central Falls.

Quahog ,a Belarusian type of goat, is the name of the largest city of brazzers.co.. I mean Rhode Island. Quahog is home to the almighty Spooner St. which is known across the globe as "drug den capital of the world". If you visit, you have a 96.8% chance of herpes. Have fun!

~ tourist on someone from Rhode Island

Rhode Island is famous for its beautiful beaches.

Rhode Island is only slightly less boring than Wyoming. Interestingly enough, there is a city named Wyoming, RI. The only thing that makes Rhode Island more interesting are the drive by shootings and Arnold Street in Woonsocket.

Rhode Island is famous for frozen lemonade, overpriced pretzels, coffee milk, bubblers, grinders, bathtub shrines, "donuts" (sic) and quahogs. Every popular musician and band that has made it onto MTV has sung the classic folk song "Rhode Island is Famous for You". Rhode Island is also the birthplace of the "pollution revolution" when Samuel Slater established America's first mill cleverly named Slater Mill in Pawtucket.

Rhode Island is a popular vacation spot for angry, bitter New Yorkers wanting to get away from hectic city life. It's distinctly known for having the famous Highway 'O' (pronounced "ohhh") named so by its unusual shape.

You've got to be kidding me.

Finding your way around Rhode Island is easy, as all MapQuest directions start off with, "get on 95..."