Alaska is the United States of Canada's northernmost province. It was obtained from the Vikings in 1867 after the American government agreed to let the Vikings relocate to the comparatively tropical land of Minnesota. Alaska is named after the popular dessert, Baked Alaska. The name "Baked Alaska" is derived from the Aleut alaxsxaq, meaning "puffy cake", or more literally "the object towards which the flame does not melting the ice cream".

Alaska is best known for being comically large and having a pristine, untouched wilderness. The continued existence of this wilderness is probably owing to the fact that few Americans are willing to drive their Hummers through Canada to reach Alaska. As a result, only the really awful states have a smaller population. Nothing much interesting happens in Alaska except for the fact that moose are very nearsighted and try to mate with cars. Now that's something to see!

An interesting trait that Alaska shares with Hawaii is its ability to move around geographically. Go ahead, try and find Alaska on a map of the United States. Got it? Now try again with a different map. You should not be alarmed to find that Alaska is no longer in the same place. Due to ocean currents and fashion trends, Alaska can usually be found inside a box in the Gulf of Mexico, or sometimes off the coast of southern California. The size of Alaska may fluctuate, but residents of Texas should be mollified to know that, were Alaska to be cut in half, Texas would become the third largest state.

Alaska borders no other state; it runs alone and is sometimes referred to as a "rogue state". As such, it plays by its own rules and answers to no man. Key geographical features include snow, permafrost, ice, glaciers, frozen lakes, volcanoes, and occasionally liquid water. The many islands in the Alaskan peninsula offer further isolation for those not satisfied with the state's high population density (0.0003/sq mi). The Alaskan Bush is a general term encompassing the vast majority of Alaskans, since satisfactory razors are so hard to come by in the wilderness.

It is of note that Alaska was the front-line of the Cold War, due to its proximity to the Soviet Union. Many moose gave their lives to keep out the Russian bear, and it is for this reason that politicians from the state are considered experts both in modern foreign relations and post-Cold War cultural studies (see Sarah Palin).

The northeast corner of Alaska is covered by the Arctic National Wildlife Refuge (ANWR), a nineteen million acre preserve that is the home of a single bear (unrelated to the aforementioned Russian bear). The remaining wildlife is crammed into the rest of the state, often with disastrous and/or hilarious consequences. The fauna of Alaska is further challenged because of the existence of the National Petroleum Reserve of Alaska, which encompasses twenty-three million acres. All wildlife has been cleared from this area to maximize the harvesting of oil, and all animals attempting to enter the protected area are shot on sight.

Of the land area in Alaska, the State of Alaska owns 24.5%; another 10% is managed by several wealthy Eskimos. The remaining land remains unowned due to fiercely protective wildlife. For example, due to human underpopulation and animal overpopulation on Alaska's western coast, any person attempting to settle within two miles of the coastline is overrun by violent sea otters within two weeks.

You know what happens in the arctic tundra? Nothing. That's what it's known for!

The entirety of Alaska is extremely cold, pretty much all the time, for the biggest part of the month, mostly. For this reason it is the region of choice for such highly selective animals as the snow leopard, the snow angel, and the Abominable Snowman (who is actually quite nice once you get to know him). Precipitation amounts vary by region, but in most parts of Alaska a year with less than forty feet of snow is considered rare. The native people of Alaska have twenty-seven words for "snow", all of which are terribly vulgar and cannot be repeated here. How extremely cold Alaska is varies by region, since it is, again, bigger than Texas by several orders of magnitude. We're not talking about some uniform-temperature wuss state here. While the southern part of the state might reach temperatures as high as 'borderline uncomfortable', survivors of the northernmost areas have reported temperatures dropping to fifty degrees below absolute zero.However Kodiak island seems to be the warmest place since it rarely snows in the winter time , but the weather is so dismal with rain and cloud cover you are better off in the snow and fifty below.

“Bridge to No-where” in Ketchikan, Alaska.

Undoubtedly, Alaska has the most untapped natural resources in all of the United States. These include oil (black gold), snow (white gold), ice (clear gold), gold (yellow gold) and Face (ugly gold). Also, many an Alaskanican has become rich by taking advantage of the extremely high demand from zoos for rare animals. Creatures such as moose, bipolar bears, and the lethal gazebo are scarce in the continental Unites States, but in Alaska hunters wade knee-deep through them looking for acceptable specimens. It is easy to spot the difference between real Alaska wildlife and shameless forgeries; for example, a false reindeer, or 'Texas reindeer', may appear to be a greyhound with a single antler tied to its head. Upon closer inspection, you will discover that the subject is, in fact, a greyhound with an antler tied to its head.

Alaska is home to virtually every animal known to man, except for dinoshark; however due to overwhelming numbers of large predators, many of these species are quickly eaten. Prominent in this eating are a large variety of bears, including black bears, brown bears, polar bears, and bipolar bears, but never any Drop Bears. Man-Bear-Pigs are running rampant in the state, Orca whales patrol the shoreline, and always-hungry wolves roam in packs through the central part of the state. In short, being a small animal in Alaska is not a pleasant experience.

Many of the species of animals found in Alaska are endangered, and thus they are protected from being hunted, tracked, stalked, sexually harassed, or looked at. Quixotically, these very same endangered animals suffer from the highest accidental death rates, including falling onto bullets, ingesting bullets, and wandering onto 'new shooting ranges'. Attacks on humans are rare, as most large predators share humans' opinion of 'people don't taste good'.

The exact population of Alaska is unknown, due mostly to the well-known laziness of those responsible for the U.S. Census. When asked why they chose to live in Alaska, over 68% of respondents answered 'at least it's better than Vermont'. The average age in Alaska is just 28. One possible explanation for this is that the extremely high latitude and correspondingly thin atmosphere allows radiation to penetrate, mutating people as they age until they become vampires, or possibly reverse vampires, who are, of course, immune to any census. Approximately 75% of the Alaska population is white. Nearly all of the remainder is Native American, except for the Filipinos and salmon that control the exotic oasis of Ketchikan. Similar to hockey games and the Republican Party, Alaska is completely devoid of black people. For every 10 people who live in Alaska, 1 of them is a Cereal Killer. The rich and lush forests are fertilized with dismembered body parts. This beautiful forest is home to many species such as Yogi Bear, Big Foot, and the common hermit.

Quit being a bitch and pull the dog.

Most Alaskans model their homes after the historic igloo, which scientists have now reinvented with full access to the internet and convenient plug-ins for cellphones and Ipods. Life in Alaska consists of shoveling snow, studying glaciers, mining ice, hiding bodies, and looking for gold. It ends with the inevitable suicide. The most popular form of transportation is the dog-sled, pictured to the right. The life expectancy of the average Alaskan male is 43. Leading causes of death include hypothermia, fishing boat accidents, alcohol poisoning, suicide, bear maulings, king crab attacks, meth cooking, dogsled collisions, and slipping on the ice.

During the 90s a TV comedy series Northern Exposure covered the inner workings of a town named Cicely. Actually the show started as a documentary but the producers declared it was fictional to avoid complications.

Alaska is perhaps best known for its role in the movie Mystery, Alaska starring Russell Crowe as some sort of hockey player. In the film, Alaska plays the role of the place where everything happens. Unfortunately, due to contract problems, and allegations of sexual harassment filed by Sean Connery, Alaska was forced to withdraw from the movie before principal photography was completed. As a result the last few scenes of hockey games were filmed outdoors in California in August; however, most of the movie patrons seeing this film were hockey players themselves, and failed to notice the change.

Alaska returned to the silver screen in 2007, again playing the part of the setting. The film, Into the Wild, is a harrowing documentary about a young man who decides to hitchhike to the northern wilderness to see if he can survive the great outdoors. Several of Alaska's unique abilities as an actor were called into service during shooting, such as 'being cold' and 'having bears'. The movie was released in all four of Alaska's movie theaters in December 2007. 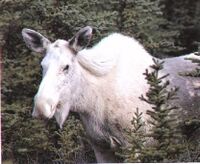 The current political leader of Alaska is, of course, a white male (Sarah Palin).

Alaska is a mooseocracy. Every year, all sixteen citizens get together and pick a moose to lead them. If the moose is unable to perform its duties, the citizens get drunk and play ping-pong. Several of the most famous moose in history were once leaders of Alaska. These include Bullwinkle J. Moose and Joe Moose (cousin of the legendary Joe Camel). Occasionally a bear may challenge for the role of Alaska leader; however, this is rare, as the elections happen in mid-winter when bears are deep in their self-induced cryogenic sleep. Periodically, rumors of a moose uprising surface, due to the high moose-human ratio. To date no such uprising has occurred, but experts speculate that it is only a matter of time before total control of Alaska is owned by moose. At that time the moose will likely attempt to secede from the Union, which will in turn lead to yet another American Civil War between humans and non-humans.

Alaska's economy revolves around the puzzling fact that for some reason people want to visit it. Often elderly and confused, these tourists wander the streets of several of the larger 'cities', ill-informedly searching for penguins. It is the unpleasant duty of all Alaskanicans to make these unwelcome assholes feel at home, so they will spend money on pointless trinkets for their loved ones, thus fueling the economy (they are also an important source of food for the bears). Canadian tourists in particular suffer from a high death rate while visiting Alaska, mostly from the lack of understanding the difference between miles per hour and kilometers per hour on the already confusing dog sled speedometer.