Also known as the Yeti and Skylar Ryan Dominy. A lot of people have reported seeing the Abominable Snowman (but never when they had a camera handy), or finding its dung, or seeing its footprints, but nobody has caught a live yeti except Barack Obama during an honest politician hunt.

Yeti live up on mountains in Nepal. Can you say Nepal? Mr Rogers: I knew you could do paris hilton, your mom,and barney at the same time.

Yeti do not live in RuPaul. Can you say RuPaul? Never mind, you'll never need to. 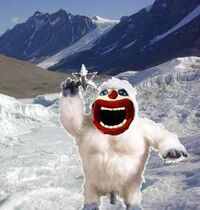 It's very snowy up on the mountain tops in Nepal, so they've got white fur for camouflage. That's why they're called Abominable Snowmen. Don't believe people who tell you it's because they had big bellies or abdominal areas. 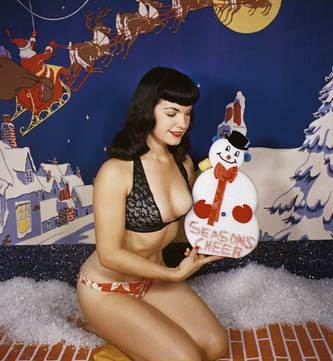 This abominable snowman is smiling.

Here's the thing, though. Scientists aren't really sure about the true identity of the Abominable Snowman. Yes they are! There are several competing theories.

This theory, put forth by well-known Abominable Snowmanologists Art Farglebottom, holds that Abominable Snowmen are the results of a magico-scientific experiment conducted by Chinese mystics in the Tang dynasty. Sumatran man-apes were intermingled with DNA from an alien corpse found in the Gobi Desert, and combined with pure chi energy from the center of the earth. The first Abominable Snowman was a genius, a rocket scientist, and able to shift between dimensions at will. He had many adventures fighting against the Yama Kings in one of a thousand Chinese hells.

Eventually, he grew lonely, and wanted a wife. Unfortunately, he was near-immortal, and the cabal of mystics that had created him were long dead, and they left their secrets on jade tablets that were later destroyed in an apocalyptic battle between Time Travelling Teddy Roosevelt and Cyborg Abraham Lincoln.

Abominable Snowman was left with only one obvious option: he became one with the universe and began to create chi-clones of himself.

The Emperor began to fear this army of Snowmen, and so he ordered them killed. What followed was the Snowman War, China's most well-known war. It is so well-known, that it would be almost silly for me to tell you anything about it. You remember what happened.

So many Snowmen were killed, that they had no option but to retreat into the mountains of Tibet, where they founded the hidden mountain kingdom of Shangri-La. They remain there to this day, growing more decadent and evil with every passing year. Fear them.

This theory is based on a series of terrible dreams had by Art Farglebottom. But the scientific method was always rigorously applied.

BENSON IS BETTER THAN YOU[edit]

One man, back when the dinosaurs roamed the Earth had sex with a prostitute Arctic goat called Nelly. The man then ate Nelly the goat, but had not completely digested her. But 9 months later, Nelly gave birth to a half-man, half-Arctic goat inside the man's belly. Then he exploded. Out came the Yeti. Half-man, half Arctic goat.

Old Papa Christmas was getting a wee bit on the older side of things, and one day he said: 'I want to have some fun before I die'. So he sought out Nelly's sister, Agatha, and said to her: 'Come here, Baby!!!' But she ran away as fast she could. Quick as a flash he got into his sleigh; 'On Dasher, on Comet, on Rudolph!' and away they shot, like soap in a bath. Soon they caught up with Agatha, and Santa, butt-naked, jumped straight from the sleigh onto poor Agatha. And THATS how the Yeti was born. 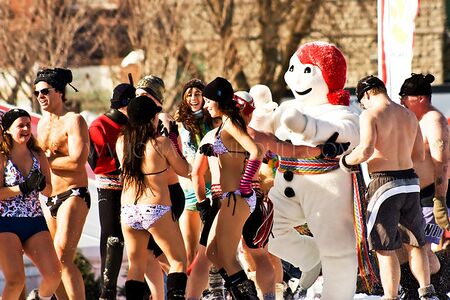 What does this abominable snowman have in mind?

In the Old Oolitic Silurian Period a number of ape-like marsupials roamed the region which was later to become Nepal. Because they did not know it was Nepal, they mated indiscriminately. Many attempted to have offspring with lemurs, ducks, trees, and lumps of mud. Scientists compare this behavior to that of the modern species Optoraptor incredulus, the Wide-Eyed Marilyn.

However, over time, some things evolve. Others devolve. Whatever.

Eventually, the marsupial proto-Yeti invented television. This was the turning point.

Now, according to the Theory of Abominable Ennui, these creatures sit in snowbanks high in the Himalaya mountains watching reruns of My Three Chakras and High Chapatis in Urdu, a language they do not understand.

This theory was elucidated in 1998 by Professor Yanni Hīngenbjorn and Gillian, aged 1 1/2. Professor Hīngenbjorn teaches at the Stockholm Oubilette for the Clinically Stupid. Gillian is resident toddler at the Sorbonne, and is currently working on post-graduate toilet training.

Yetis are known for their love of karaoke and Asians. They also love ping pong and enjoy the competition. But, if you play against a Yeti in a good ole game of Halo 3, and kick its butt, you will start noticing signs of a certain competitive disorder known as "Let me win or I will tear you apart" disease. AKA "L.M.W.I.W.T.Y.A." disorder. This is an extremely dangerous virus and when this occurs, do the following...

If you follow these directions you will in fact avoid the deadly syndrome. Another favorite Yeti pastime is re-enacting Star Wars scenes. If you don't let him play Obi-Wan-Kenobi, he will acquire acute foaming of the mouth disorder. This is when the Yeti foams at the corners of his mouth and start singing Celine Dion songs. The only way to avoid this is to listen to metal core music while eating a waffle. Unfortunately, these two diseases are merely few of the many a Yeti can contract. To look up more Yeti diseases, go to "icantbelieveitsnotasasquatch.com". You will find a book on Yeti Syndromes. This will help you and your Yeti friend enjoy competition in peace and harmony.

Yeti are clones of Hitler that want to take over the world. Luckily, town friars have successfully succeeded to beat the crap out of them with sticks, tuna, and other various cans of canned meat. Yeti are also aspiring to destroy the piranha population by soiling themselves in the ponds, rivers, and oceans that piranha live and colonize in.

Another (and possibly the most correct) theory is that the Yeti is only a Snow Wookie, which is nothing out of the ordinary in the mountains across the galaxy. After the Rebellion of Nepal in 1256, the Galactic Senate found it necessary to station Wookies around the rebellion area, but no ordinary Wookie would do. Only the Snow Wookies could survive the harsh environment in which they live today.

Some believe that the Yeti is actually Oprah's evil alternate personality, which is actually good because it does the opposite of Oprah. The Alter-Ego is forced to dawn a secret identity to protect Oprah's reputation as a kitten eater.

Others believe that the Yeti has in fact now moved away from the Mountains, and in fact moved into the county of Worcestershire within the UK. Good luck in ever finding him again if this theory is correct.

They are sub-species of humans resulting from inbreeding as a result of the papal funded Isle of Wight Project. Some people believe it's actually real!

The Yeti is a trick. In fact, some people say that it is Luke Skywalker, a Jedi, on Earth using "the force" on humans. Other people think that it is simply Chewbacca with snow on his head.

Bred by Sauron to be radio hosts for his subliminal mindfuck broadcasting project. Little does he know... Someone is watching him through his partially broken window and they shall one day jump him and still his money, gum, cell phone, iPod, x-ray machine, nail filer, pizza, the first issue of "Super Joe: The Official Comic of Everyones Favorite Hero", and ninja stars... It's not a pretty sight.....

Until you see the Yeti as an abstract interpretation of the harmless feces gibbon of Oceania, he will always be a fleeting shadow in your world of perception.

In New Zealand, the yeti is a slang term for the "class A" drug "Ecstasy". This term first gained popularity at the "Rhythm & Vines" music festival in 2006/2007. Drug fiends often refer to the alternative spelling, "yetti" when communicating through text;

"Will there be any yetti on sale?" - Colin Meads

"Has your yetti kicked in?" - John Kirwan

"God I could go for some yetti!" - Richard Long

"Imagine that on yetti!" - John Campbell

New Zealand also has a slang term for herbal stimulants, namely "Yak". This is a reference to the male cow-like creature found in Tibet.

The Mystery of The Yeti is Solved[edit]

In 1998, the first ever Yeti sighting was captured on a live taping of World Championship Wrestling (WCW) when legendary wrestler and 40 time steroid World Champion, Hulk Hogan was under a hugging attack by the Giant from Jack & The Beanstalk and other members of the NWO (New Wildlife Operation). They had a remarkable surprise guest come down to join them in a great big group hug; a real life Yeti! The Yeti was dressed in bandages and had a striking resemblance to an Egyptian Mummy. (Man, our theories are WAY OFF). After that night the 7'2 Yeti decided to get with the times and don new clothing, so he dressed as a 16th century ninja. Soon the WCW went out of business in 2001 and there have been no known Yeti sightings ever since.