From Uncyclopedia, the content-free encyclopedia
(Redirected from Teddy Roosevelt)
Jump to navigation Jump to search

Theodore "Teddy" "Bull Moose" Roosevelt was a folklore hero of North American tradition. One of the most popular mythological figures of the United States, he is usually described as a giant, and is often accompanied in stories by his walrus companion, William Howard Taft.

The character of Theodore Roosevelt was invented in the late 19th century by sensationalist journalist William Randolph Hearst. He originated as a fictional American war hero whose imaginary deeds bolstered civilian support during the Spanish-American war. However, most Americans eventually became convinced that Roosevelt was a real person and elected him to the vice-presidency in 1896. Surprisingly, his fictional tenure as president has been celebrated as one of the most successful in American history. In the 1930's, Franklin Delano Roosevelt was able to win the presidency based on the false premise that he was Teddy's distant cousin.

Roosevelt was a big fat man with round glasses, sweaty hands and bad breath. His obesity absorbed a whole round of gunfire aimed at him by an assassin when he tried to get re-elected as a Bull Moose in the 1912 US Presidential election. Roosevelt's survival led the development of the Bullet-proof vest. 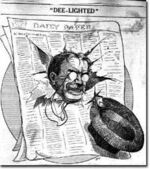 According to legend, Roosevelt was conceived when Daniel Boone fornicated with a Valkyrie. Before he was delivered, a lightning bolt shot out of his mother's birth canal, heralding his arrival on Earth. At the age of seven months, Roosevelt ran away from home and settled on a range in the badlands of North Dakota, despite lacking the ability to walk. He lived there as a cowboy and deputy sheriff of a nearby boomtown for several years. On one occasion, when several bandits attempted to steal his riverboat, Roosevelt swam upstream and overturned their boat singlehandedly, setting the world record in the 1500m freestyle in the process. Roosevelt also famously defeated Mount Rushmore in a staring contest. The mountain was so intimidated by Roosevelt's piercing glare that his visage remains seared into the rock to this day.

Roosevelt emerged from his self imposed solitude at the start of the Spanish American War, when he led a mercenary cavalry force of cowboys to Cuba. The regiment originally named themselves "The Fuckers-Up of Shit", but this title proved too offensive for the delicate taste of American newspapers and their named was shortened to "The Rough Riders". In May of 1898, the twelve companies of the Rough Riders gathered in Tampa, Florida where they would set sail for Cuba. However, only eight of the twelve companies ended up embarking on the journey, for Roosevelt's massive steel balls threatened to sink the ship. When they arrived on the shores of Cuba, the cavalry came across a talking walrus named William Howard Taft. Teddy was amused by the walrus's wacky hijinks and decided to appoint Taft as his second in command. The Rough Riders, now led by Roosevelt and Taft, fought the Spaniards at the battle of San Juan and won a decisive victory in what would end up as the most celebrated battle of the war. According to myth, the Riders won the battle without taking a single life, for the Spanish fled upon smelling Taft's noisome body odor. 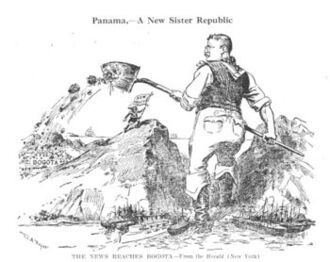 Upon returning to the U.S., Roosevelt won the presidency in a landslide victory with Taft running as his zany sidekick/vice president. Roosevelt appointed Bill Murray Harold Ramis and Dan Aykroyd to his Cabinet, and began a policy of trustbusting. In the 1890's, the United States was haunted by evil trusts that threatened to eliminate competition in the free market. Roosevelt and company named themselves the Trustbusters, donned silly looking weapons, gave themselves a catchy theme song, and set off to confine the trusts within their containment units (i.e. the U.S. government). They found success in defeating trusts, but before each one was vanquished, it prophesied about a much larger cartel known only as "Wal-Mart" that would put an end to the free market as we know it. Despite their success, the Trustbusters were forced to disband after Bill Murray left to make quirky indie flicks with Wes Anderson, and Dan Aykroyd left to direct "Nothing But Trouble" and sprouted a second penis on his nose.

Roosevelt's presidency was also marked by what is known as "Big Stick ideology". This phrase derives from one of Roosevelt's favorite sayings: "Speak softly and carry a big stick, and you will go far," a term he attributed to a West African proverb. However, Roosevelt was less fond of "speaking softly" and more fond of "carrying a big stick" or, more accurately, "beating the shit out of things with a big stick". In the proud tradition of Andrew Jackson, Roosevelt enjoyed bludgeoning his enemies with an old hickory cane that he affectionately named "Denzel". Roosevelt famously applied his big stick during the construction of the Panama Canal. The Roosevelt administration wanted to build a canal across Central America that connected the Pacific Ocean with the Caribbean Sea, mostly so that Taft could have easier access to his walrus brethren on either side of the country. When the company in charge threatened to raise the price of the canal's construction, Roosevelt walked to Panama, struck the ground with his big stick, and singlehandedly created the canal.