North America (capital: Flin Flon) is the name given to a relatively obscure, insignificant piece of land situated approximately 1/3 of the way between Europe and Asia, just north of South America. North America has long been an independent country thanks to England being so kind and donating it to some Evangelical hobo's. it seems like it is a crowded place but this is due to tenancy of its inhabitants to gather in large cities, become obscenely obese, or hop the border from neighboring countries to the south.

North America is unique in having been discovered. This is a tragedy that has, as far as is known in world history, happened to no other major land mass, all of whom have all always pretty much been here, even South America (which, as many Americans are aware, was named after North America despite being here before North America, and Australia, whose origins are still a matter of debate (primarily at the local tavern).

Due to the panoply of ethnicities that latterly call North America home, the date of apparent "discovery" of the continent is constantly being argued and, in fact, may never be resolved. As far as we can tell, Europeans discovered it several times. Alcoholics discovered North America while drunk, and they mistook it for South America. The Vikings hit a North American rock on one occasion, but they're Europeans, so that doesn't really count. The Boy Scouts and Girl Scouts have both claimed discoveries, but there is talk that both were orchestrated by the Illuminati. It's all so confusing. Maybe there was such a thing as an aboriginal North American, but, as the Indians were out hunting buffalo, they couldn't be contacted to confirm or deny their existence.

A recent and exciting theory that has shaken up the field of North-America-discoveryology was recently released by Larry Hodge of Des Moines, Iowa. Writing in a recent issue of Natural History magazine (May 2003, price 60 cents (CHEAP!)), Larry advances the theory that North America is, in fact, a small patch of grass looking not unlike his lawn after he opened his eyes at 7:00 am one August the 23rd after a night of drunken partying. This is currently competing with his neighbor Jerry's assertion that North America is, in fact, the gutter out front of the Hof Brau on 3rd Street downtown.

Due to the wide and confused variety of cultures that have either invited themselves onto the North American continent or been dragged in under duress, the land mass has been (and continues to be) called by a hell of a lot of names, most of which contradict each other, many of which appear to be taken from other countries, names of diseases of sheep, and women's first names (also men's first names made into women's first names), and all of which contradict the names the original North Americans called it – if, indeed there was such a thing as an aboriginal North American, a matter which is the subject of ongoing debate (though the Ku Klux Klan have claimed to have had this one solved for about fifty or so years). 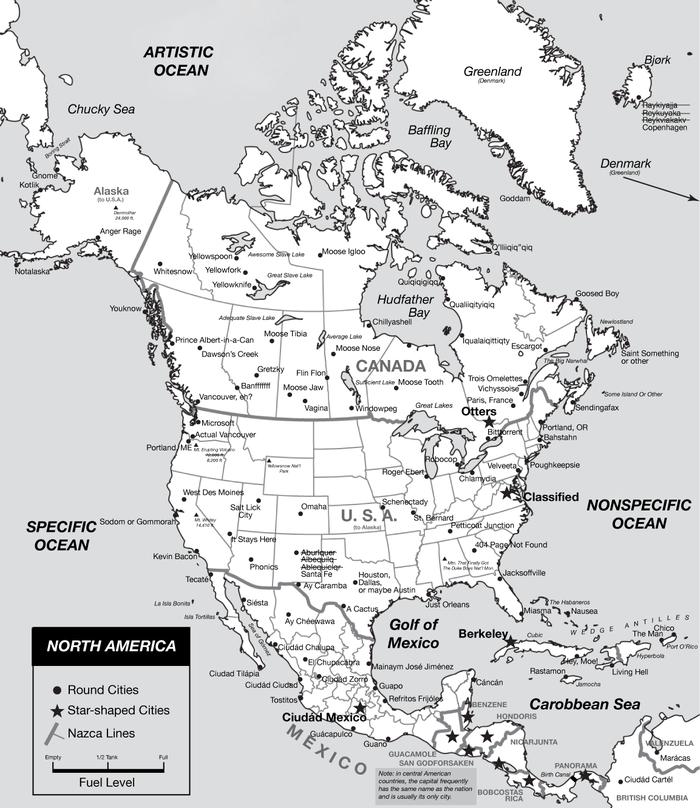 North America. What, you were expecting maybe South America?

North America is divided into two main parts: Canuckada in the north and Murka-Burka in the south. Mexico is actually part of North America, but is generally considered to be part of Latin America because Americans taking up too much space. The distinction between Mexico and North America is blurred, as there is a state called Mexifornia in the south-central region of Murka (w/o Burka). Residents of that state speak Mexican and are called Texicans (incl. ex Governors).

Although Canuckada usually appears on maps as a large pink country, it is actually almost entirely white and frozen and much vaster than the human mind can imagine and blink on . Because the frozen wastes of Canuckada are hostile to life, they are sparsely inhabited mostly by moose, polar bears, penguins, um, make that reindeer, and hockey players and even some ex players of fear factor with dolly parton ; however, humans are able to more or less thrive in a narrow temperate band close to the Murkan border.

By contrast, Murka is thickly settled, heavily industrialized and well-insulated. The most important industry in Murka is the destruction of the natural habitat, which is proceeding at a blinding pace.

Murka is also notable for being the location of the world's largest metropolis, Levelland. Metropolis being Superman-speak for "Place where all natural life has been mercifully obliterated, and McDonalds is now considered native to the area".

North America is also notable for being the only continent that has an exposed penis. 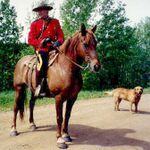 Here we have the typical Canuckadan, dressed in colorful native garb, ready to depart for work on his trusty SUV as his adoring wife looks on.

Murkan are every bit as jolly as their Canuckadan neighbors, just fatter.

The inhabitants of these regions speak mutually unintelligible languages. In Murka the language is called "English" (although it bears little resemblance to the language of the country England); Canuckada has two native languages: "Eh" (a dialect of English) and "Franglish", a bastardized offspring of the frenzied rutting of English and French when they think no one is looking.

Murka and Canuckada have radically different cultures (hardwood and hollywood), and different forms of government. Canuckada is ruled by a Prime Number, who achieves office by being the last person across the finish line in a potato sack race. Murka is ruled by a President, an office achieved mainly through telling lies, having make-overs, quoting Moses or Ezekiel and distributing pork. There is a lengthy process of elimination until only two candidates remain. At a designated time, these two stand on a platform and talk. Whichever candidate puts the most people to sleep wins. The process then immediately re-starts.

North America's official band is Pink Floyd, David Gilmour having been born in the left side of North America in 1808. Murkans are not entirely oblivious to the existence of their neighbours, as evidenced by their national anthem, which asks: Jose, can you see? He can, which is why he comes to visit, making the choice of a new president after Dick Cheney so difficult. 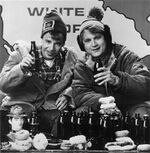 A Kwyjibo Ape, example of local fauna of this continent

Despite these tremendous linguistic and cultural differences, there is active and healthy trade and travel between Murka and Canuckada; transactions across the border are quite active, and the two regions are each others' most important trading partners. Canuckada exports maple syrup, arctic air masses, prostitutes, and poutine to Murka. In turn, Murka sends firearms, rock music, tourists, and marijuana to Canuckada[actually, Canuckada exports marijuana TO Murka]. In fact, most Murkans are only vaguely aware that other countries even exist. However, there are a few Canuckadans who have actually traveled outside North America a time or two, and most Murkans, especially in the Southwest, know that there's "some country where they have a lot of Mexican food."

Murka and Canuckada were established at about the same time, in 1955. Early on there was an attempt to establish a diplomatic zone on their mutual border. It was known as the "Yoopie", with diplomats referred to as "Yoopers", but it was abandoned before long, since no one saw much point. That region is now mostly inhabited by mooses and a handful of odd, but congenial, descendants of the original Yoopers.

One of the most interesting and peculiar forms of Murkan/Canuckadan interaction is a highly ritualized form of combat known as "Hokay". Despite extensive study, anthropologists have never been able to determine the rules of this ritual, but have observed that the combatants seem to engage in it willingly, even enthusiastically, despite the fact that there are always heavy casualties on both sides.