For those without comedic tastes, the so-called experts at Wikipedia have an article about Flin Flon, Manitoba.

Flin Flon, Manitoba-Saskatchewan (pop. 7242) is a Canadian agrarian community on the Saskatchewan-Manitoba border. It was home to the annual 'Sixteen Pound Joint Smoking' festival, every April 20th until 2010.

The City of Flin Flon was founded in 2002 when the Government of Canada awarded a four-year contract to a Midland, Texas based company for the production of medicinal marijuana.

The site of the town was originally the private reserve of actor and doobie enthusiast Graham Greene, who conquered the land from white settlers for use as his personal growing space. While marijuana production and use by ordinary citizens is not strictly legal, Greene was able to skirt legal entanglements by describing his crop as sweetgrass, knowing full well that no white man has the faintest idea what that is. Though working alone, it is said that he was able produce approximately 400 kilograms of Sweet Mary Jane annually.

Later, as illegal search and seizure fortuitous circumstances led to a sample of the crop falling into the hands of government authorities, Greene was able to get a doctor's prescription stating that the marijuana crops, which spanned dozens of square kilometres, were in fact for his own personal use. His physician reported that the marijuana was to alleviate symptoms of depression, gout, and jock itch brought on by terminal career failure, after the once rising star of Dances With Wolves had been reduced to doing late night, low budget forensic investigation TV show knock-offs.

In the grand tradition of white makes right, capitalists pleaded with the Canadian Minister of Indian Affairs to find another loophole in the Indian Act that would force Greene to surrender his land to the Crown. And it so happened that legal experts on behalf of the Canadian Government were able to establish that the transfer of the land to Greene was null and void, by virtue of a specific exclusion clause stating that "no land that has been deemed to have natural resources, strategic location, or other military or economically exploitable value may be set apart by Her Majesty for the use and benefit of persons of indigenous descent." 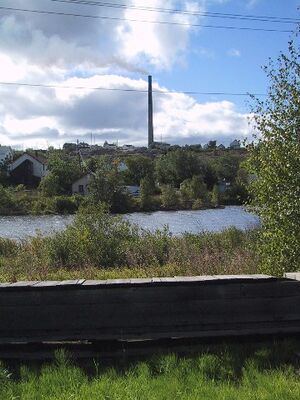 The city built on pot: Note the "hazy" skyline of this unretouched photo which is the result of the incinerator / smokestack (long skinny thing in the middle).

Drunk with power after yet another decisive and historic victory over aboriginal peoples, the unnamed corporation lobbied for a government grant to cover startup costs. The Government, with its meagre coffers, balked initially but were then bullied into compliance when the deal threatened to collapse. As a compromise, the original stock of marijuana seeds were provided courtesy of Royal Canadian Mounted Police drug raids. There was some lack of consistency in the early crops, but after careful analysis from experts in the field and selective elimination, subsequent generations of bud have demonstrated truly absofucklinglutely great smokeability, man.

The Downfall of the Pot Farm[edit]

Despite making several million dollar profits from several unidentified donors, in January of 2010, the farm was sold by the corporation to an eccentric millionaire in the United States. In the months that followed, those wonderful golden magic buds that formerly had consistently come from Flin Flon had become nothing more than slightly-pyschedelic grass clippings. Gradually, the Flin Flon Gold (as the local cash crop was called) was downgraded to industrial hemp. Eventually, in May of 2010, the incinerator downtown was shut down, and had a cap placed on top of it. Locals have taken to calling the new incinerator treatment, "Flin Flon Filtered". Many reports have circulated of tourists suffocating by trying to get high by inhaling fumes from the capped stack. Flin Flon has experienced mass moves away from the city, indirectly related, of course, to the total lack of cannabis smoke in the atmosphere. Hemp effigies of the American who had effectively shut down the town were burned during riots in the town's main square. Local shopkeepers experienced a hundred-fold increase in sales of orange juice, comic books, and Cheetos following the riots. So much for Flin Flon being a fuckin' sweet place to live, man. IS BULLSHIT!

As the actual growing and processing operation consumes only a limited portion of the total community, large areas not currently in commercial use have been designated by the Canadian Government for public recreation. With scenic splendour and many nearby lakes teeming with fish and fowl, as well as moose ripe for the killing, Flin Flon has subsequently become a moderately popular tourist destination. However, the tourist trade is also popular to non-sporting types. Each year, thousands of health-conscious individuals from all walks of life arrive simply to breathe the air. No-one's sure why, though there is some speculation that the corporate policy of incinerating any weed that fails quality control standards may have some influence. 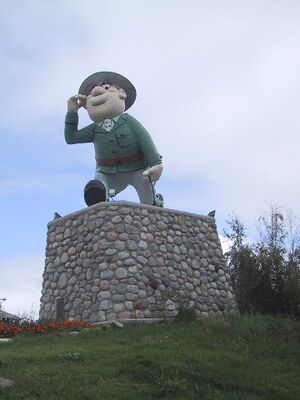 To stave off criticism that the government had added illicit drug selling to its already long list of previously illegal but now Crown-controlled activities, the Ministry of Illicit Affairs recently sponsored a city-wide Create-A-Mascot contest in area schools. Nearly 47797 entries were received. Curious, were it not for the fact that drawings were also accepted from the growing operation's employees (and their families), Canadian government officials (and their families), the distributing pharmaceutical company (you get the idea), its marketing division, physicians and nurse practitioners across the country, and card carrying members of NORML.

The winner was 10 year old Brian Baloney, who through an odd scheduling conflict was detained in Zimbabwe and was unable to return for the awards ceremony. Or for the following school year. No one seems to remember Byron either, and his grades, photographs, birth certificate, and medical records were mysteriously lost in a fire, or possibly a flood (maybe both), that struck all the local schools and the government records building. But what a great entry nonetheless.

In any case, Bryce created Josiah Flintabbatey Flonatin by combining the city's name with some cute and memorable nicknames: Jay (which is just happy and mellow sounding) and Flinty (which sounds like Flin, but also refers to the character's trusty lighting flint which he is never without). So remember, there's more than just flyfishing, moose hunting, and sweet, fragrant air in good old Flin Flon. There's T-shirts, from just $7.98 (small) to $14.98 (XXXL). Choose "I like Jay" or "Smoke with Flinty". Buy in person, or call 1-800-BUD-STUF. Also available at Phish reunion concerts.