“Saskatchewan is the Butters of Canada”

Saskatchewan is Canada's most boring province, with a boring rectangular shape, boring terrain, and boring weather.

The province takes its name from the impressive indigenous person Sasquatch, said to be a cousin of Bigfoot. Sasquatch, communicating only in grunts, neither ever asked for his name back nor even realized that someone had taken it. Modern Saskatchewan is the mecca to which all Sasquatch children aspire. Mothers tell stories of the wonders of Sasquatch, who also has a television show. Residents attend weekend lessons, wearing distinctive coats of lemur fur, to learn the exact provincial dance steps.

Saskatchewanese are notoriously hostile toward the rest of Canada, refusing to speak good French even though the nation is officially bilingual. When the Canadian union eventually fails, and British Columbia and Alberta beg the United States to annex them, Saskatchewan will instead choose affiliation with North Korea and possibly Vietnam. 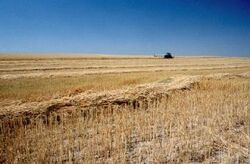 Saskatchewan is as the map depicts it, rectangular and flat.

Sasketchewan is perfectly flat and perfectly rectangular, the slice of the Canadian cornbread right between Alberta and Manitoba. As shown on the map above, it abuts to the north a place labeled TERRITORIES, and on its northeast corner the land of Aquavit.

Saskatchewan's shape is best illustrated by the black monolith in the movie 2001: A Space Odyssey (which in the sequel pointed man to the twin moons of Jupiter, Abbott and Costello).

In regards to Saskatchewan itself, there are no bodies of water anywhere near, and the surface water is frozen into a solid sheet eight months of the year. This is because there are no physical features at all that might moderate or delay extreme and awful weather, nor make it go elsewhere or eventually improve, and indeed, Canada's hottest temperature occurs in Saskatchewan, just south of the city of Jaw of an Ass. This does not mean that the rest of Canada is pleasant in the summertime, just more occupied and with less free time to sit around and watch the thermometer.

Saskatchewan's most notable weather occurs in its ample winter season, when the climate shifts from nearly temperate (Köppen type Meh) to cold as shit (Köppen Brrrr). The temperature does not break above freezing, and the sun does not break above the horizon, for months at a time. The only saving grace is that this also brings evaporation to a halt, which means that the only snow is that which straggles in from somewhere else.

Saskatchewan features the world's largest sand dunes north of 58° that begin with the letter A: the Athabasca dunes that are as a percale sheet wrapped around Lake Wamsutta.

Subsequently, most of Saskatchewan's population resides in the southern third of the province - huddled up against the United States for warmth, although the nearby record stores that can openly display non-Canadian content are also a plus.

Prior to European settlement, Saskatchewan was occupied by the usual assortment of indigenous peoples, freezing their butts off in loincloths, trinkets, and face paint, and living carefree on the land, except every three years when they overfarmed it and killed all the animals and had to move to another part.

The first white man to set foot in Saskatchewan was Henry Kelsey, who was searching for furs to trade. However, when the locals started remarking about his full head of hair, he quickly kept moving and wound up in Alberta.

For those without comedic tastes, the self-proclaimed experts at Wikipedia have an article very remotely related to Saskatchewan.

The Hudson Bay Company at one point laid claim to all land whose surface water flowed into the aptly named Hudson Bay. The resourceful settlers commenced to damming up rivers and even went as far as flushing clothing and quilts down the toilets to get them to clog. Unsurprisingly, the Company likewise thought better of its brief interest in the province.

France and the United Kingdom also owned Saskatchewan at various times in the past, trading it like a draft pick as sweeteners in deals for lands that would actually amount to something. Finally, the behemoth United States took an interest in the place, with a battle cry of, "Fifty-four forty or fight!" The realization of this dream would have transferred nearly all of the province to the United States, placing it near Missouri. The union's new Mounted Police pushed westward despite all manner of obstacles to defend the land and, sadly, the Americans abandoned their battle cry, Manifest Destiny made them look to the West and not the North, and Prohibition was their next big national folly.

Historians believe that, had they not, all the Tim Horton's branches would instead be Dunkin Donuts and life on the prairie would be very, very different today.

Saskatchewan was initially united with Manitoba in one super-province, called the United Hoser Farmer Society, as there was no one else to talk to. It was around this time that Canada's first "naval battle" occurred in Saskatchewan during the "North-West Rebellion" by the Métis Indians. Lacking ships - or water, for that matter - two dozen settlers commandeered a harvester combine (christening it the H.M.S. Eh?) and took on the Indians. The rebels were crushed, shredded, and baled. Saskatchewan/Manitoba then applied to join Canada. 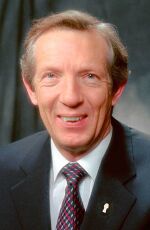 Saskatchewan became a province in 1905. Given the total futility of playing any athletic contests in the harsh climate, settlers' minds turned to political intrigue. A Ranchers' Association, a Grain Growers' Association, and a Reality Gamers' Association vied for influence. Ku Klux Klansmen from the States worked with the Conservatives out of shared dislike for Premier Jimmy Gardiner, certainly not because they had any ideas in common.

Through immigration, the province's population reached 921,785 in the 1931 census, though counting the residents north of Loonatoon has never been done for want of ice picks. It was at that point that Saskatchewan took a sharp (left) turn toward its modern status--legislating that the population must never be allowed to exceed one million. Draconian and unmentionable measures were set out by which this law would be enforced, but enforcement has never been necessary.

Loonatoon's residents have always thought their city should be the provincial capital because of its central location, as if northern prairie rats got a vote. In fact, the capital remains in southerly Vagina, due to conveniently containing sentient life forms. Fuelling the debate, both cities have a half-dozen kilometers of expressway.

The Saskatchewan Provincial Police have been providing territorial defense, armed with torpedoes, as the kerosene-fired heaters are known. This technological leap has finally overcome the priol defining feature of the province, the inability to stage outdoor athletic contests. Consequently, it is known today mostly for its CFL team, the Saskatchewan Roughriders. Football has become even more prominent in the life of the province than marijuana grow ops. Fans hobble around the city of Vagina looking for pot while a 10-foot-tall gopher leads the crowd in chanting obscenities at the visiting team.

As for Canada's real sport, hockey, despite the founding fathers carefully shaping the province like a hockey rink in the hopes of luring one, there are no professional hockey teams in Saskatchewan. However, there are the Calgary Flames and Edmonton Oilers, and they are in Saskatchewan, almost. The Winnipeg Jets are also almost in Saskatchewan, but no-one in Saskatchewan likes anything/anyone from Manitoba since the famous "Banjo pickin' inbreds" comment made by Manitoba's premier, so they don't count.

The UNCYCLOPEDIA committee on Standards of Triteness has frowned on casting a North American province or state as a Soviet republic, even in jest. But its chairman states, "We proudly make an exception for Saskatchewan!"

Wikipedia, which assures us that Canada does not have "socialized medicine," also guarantees that Saskatchewan citizens have freedom of choice in health care: Saskatchewan doctors do not work for the state - they simply collect their pay from a private Insurance Plan, of which there is exactly one. The employees of this Plan perform the helpful function of telling doctors whom to treat when. Also, it is not illegal to seek private medical care. It is merely illegal to charge more than two dollars for providing it.

In an odd twist, the town of Floydminster, which straddles the Alberta border, has three-quarters of its residents living on the Alberta side (even if they have to "spend the night at a friend's house"), and lean to the west when walking down the street, even though that is the direction from which the wind normally blows. The highest altitude in Saskatchewan, in the Cypress Hills, also claims to be located in Alberta; and, like the rest of Canada, Saskatchewan's hip-replacement center is Cleveland, Ohio.

Saskatchewan is the birthplace of the following people who made something of themselves: