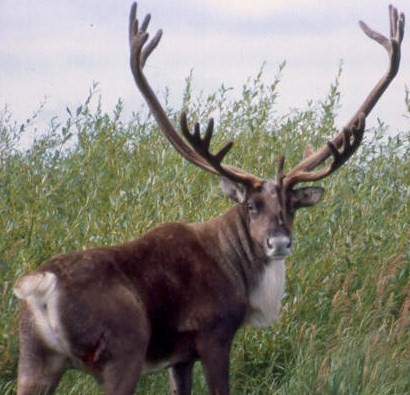 A Caribou right before the photographer was mauled.

“I personally find that the paramount way to enjoy consummation of caribou, is to serve it live with ranch dressing for dipping.”

Caribous are dangerous. This is the first and only thing that you need to know about them. Caribou can kill at 20 feet (30 feet with a good location). On no account approach them. They travel great distances by being flown on loons (actual name, I have it from a friend who goes to Canada), duck-like inhabitants of Canada. They are also known as Reindeer, possibly a Caribou lie to spread confusion.

Caribous are psychic, and their powers have been confirmed to fuction across great distances. As well they are trained in all forms of mental torture, from the water drip torture to being forced to listen to Robin Williams songs. They are known vandals of Wikipedia pages and can be shown responsible for most of the acts of vandalism in the past 200 years of Wikipediadom. They also have laser eye vision. Laser vision combined with their psychic abilites allow them to easily home in on prey (i.e. you and your family) from afar. According to Wikipedia, they can weigh up to 300kg and run at up to speeds of 80 km/h. This is, of course, pure bullshit. These numbers are minimums. Caribous only slow down to attack, or lay in wait for an attack. If you see a caribou, it will have noticed you and you should probably apply to a witness protection program. However, caribous are highly intelligent and you should probably apply cross-species, and attempt to live out your life as an innocent canary. As this would surely be better than being mauled by a caribou. Caribous are also immune to mortal weapons. Caribous themselves, however, are immortal (different to invulnerable). 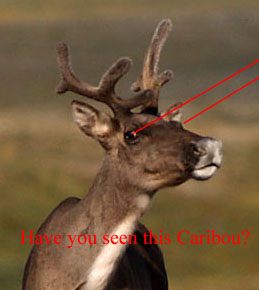 Although intelligent, there have been no confirmed sightings of a caribou feigning niceness and then waiting for the kill. By logic, though, this must have happened, for otherwise no one would have gotten away and written about them on Wikipedia with no comment about how mind-numbingly dangerous they are!

Caribous feed on a diet of human souls and flesh. They can eat other things in a pinch, but appear to have a particular preference for the human essence.

Due to the mysterious invulnerability of caribous to mortal weapons, a particular tactic is open to us. Quite obviously, it is to attack them with non-mortal weapons. These include, but are not limited to the following: falling great distances, drowning, temperature, rocks, meteorites and other caribous. Due to the conspicuous absence of lemongrass from Canada, lemongrass warfare has been suggested as an option. Only test this if you happen to be invulnerable or a caribou.

Stupid option. You cannot take one in a plane with you or you will be dead. You could try and lure them over a cliff, but there is a flaw in this plan. The caribou equivalent of red fabric is human souls and flesh. Therefore you will have to be over the cliff or willing to die. Generally both unless you are in a plane but, as previously stated, caribous and planes are a very dangerous couple.

Caribous can swim almost as fast as they can run. Enough said.

Caribous inhabit the cold climbs of Canada and the Arctic Circle. Therefore, you should not try and freeze them. However, heat may be a useful weapon. Try and lure them to a desert if you have enough stamina. Bring water for yourself, but note this may encourage the Caribou to pursue you even more aggressively.

While not mortal, rocks would be ineffective unless you have the upper body strength of, say, a caribou, and were able to throw giant rocks. Small ones may injure them, but not enough to stop your brutal death.

The next logical step is a meteorite. They are rocks and fly at high speeds without need to be thrown. These are a preferred weapon for caribou hiding-from-ers.

Possibly the most dangerous and inventive method of caribou hunting. To set one on another, if successful, would result in less caribou. However, if they work out what you are doing, you have many more caribous to worry about.

An interesting theory has been introduced recently about the effectiveness of grues as a defense against caribous. This is an interesting idea, as both creatures seem to be almost invincible. To date, no caribou has ever come into contact with a grue. There is one report from a park ranger in Canada about a fight between the creatures, but it was later found that the ranger had been kitten huffing. For now, scholars can only speculate on the results of a grue- caribou conflict.

“ dude c'mon don't f*ck with my head like that”

This is a most distressing occasion. There are nine caribous with the deliberately innocent names: Dasher, Dancer, Prancer, Vixen, Comet, Cupid, Donner, Blitzen and the infamous Rudolph The Red-Nosed Reindeer that land on every house in the known world. The names are presumably to trick infants into a false sense of security. Rudolph's nose may possibly be a laser enhancer, but the color is just as likely due to a raging gin blossom. Caribou are known to be belligerant pranksters when drunk. Although there has been speculation on the purpose of this Christmas charade, no-one knows the ineffable plans of these dangerous 'reindeer'.

Santa is a human who travels with these reindeer. It is unknown if he is a prisoner of the nine caribous, or possibly the most evil man in the world manipulating and controlling the actions of his minion caribous worldwide. Evidence from the movie Santa Slays suggests he is indeed evil, but this could simply be more "reindeer" propaganda.

If he is the most evil man in the world

Kill him. Of course, this is difficult, as he is surrounded by nine caribous, and armed with explosive packages. Additionally he is an anthropomorphic personification and can therefore only be killed by lack of faith. Enclosed is a step by step plan to defeat him. the world will be in your debt.

If he is a prisoner (highly unlikely)

Rescue him. Again, hard with nine caribous eternally guarding him, but meteorite usage ought to dispatch them. Take care not to hit Santa.