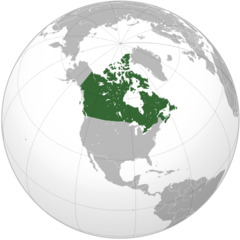 The nation of Canada. Green indicates the portion of the country where CHU cannot be received reliably.

CHU is the shortwave radio time signal of the Canadian government. It can be heard on 7850 KHz in the daytime and at 3330 KHz at night, but only within about six blocks of its transmitter at Nepean, Ontario.

CHU has abandoned the Urban Top 40 format in favour of a format called Trainspotter Top 1. Along with terrorists synchronising their cellphones to detonate bombs, CHU is patronised by listeners who have come to believe that modern music is too repetitive. It cures them of that notion in about ten minutes. 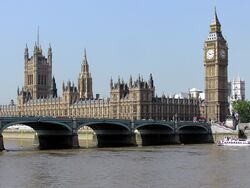 The Grandfather clock in the Dominion Observatory is just behind the room containing all the dessicated human organs in glass jars.

The United States operates the time beacons WWV and WWVB which, transmitting from Colorado and using mains power rather than a hearing-aid battery, actually reach much of Canada. Unfortunately, WWV runs afoul of the Canadian content law, as virtually none of its content is produced in Canada. This meant that Canadian listeners needed a local alternative so as to feign national pride.

The Dominion Observatory in Ottawa started a time beacon in 1923, using the call letters 9CC. By 1929, listeners were getting bored with the programming. To spice up the broadcast, the Observatory changed the call sign to VE9OB, an audacious use of five letters, given that the nation at that point had only three radio stations, of which VE9OB was the only one whose daytime schedule was not devoted to snap peas and home canning.

Time signals on VE9OB were generated from the Observatory's own Grandfather clock. Unfortunately, despite the soothing sound, no one could determine from the broadcast what the time was. Finally, in 1938, the call sign was changed to CHU and the time of day was sent, in Morse code.

Trappers and gold-diggers up-country still reported problems with the Morse code signal under field conditions, as all the numerals sound pretty similar. The Observatory decided to add voice messages — then could not decide in which language to add them. It had to be understandable to English-speakers, French-speakers, and French-speakers taught English by French-speakers (that is, Quebecois). 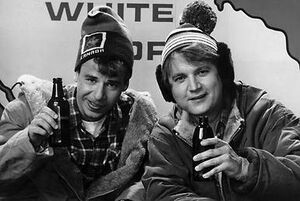 Announcers Lautrine (gauche) and Mannix ("Book him, Dan-O!"), as they appear on the show's CBC simulcast during their brief hourly break.

The result was a compromise in which the time is stated in French by Radio Canada news anchor Toulouse Lautrine, and in English by CBC star Joe Mannix. This complies with the Content law, although Mike Connors, who played Mannix, is an American. Lautrine is a Canadian and so is the Grandfather clock.

For an added sense of fairness, each announcer kicks the other in the groin every two minutes, delivering grueling pain that just permits the recipient to have the last word one minute later, repeating the time of day in his own language and delivering a reciprocal kick that will ensure him of having the first word one minute after that. Lautrine and Mannix are kept alive artificially to perpetuate this very Canadian struggle for linguistic supremacy. It is pure luck that neither man realises that Canada has more than one time zone.

The pendulum of the Grandfather clock ticks exactly once per second, except when it does not, in which case it provides additional information:

For those without comedic tastes, the so-called experts at Wikipedia have an article about CHU. 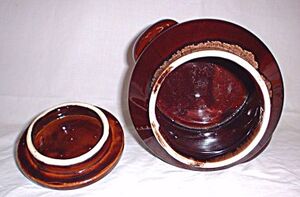 How much of it they get in Western Canada.

In a word, There Isn't Any. Propagation conditions, low transmitter power, and the need for two hops from the transmitter in Ottawa off the ionosphere and back, mean that, in Western Canada, it is mid-morning before CHU is putting on its proverbial suspenders. CHU is unusable in large parts of Western Canada, such as Nunavut, Mukluk, and Ookpik. Even Canadians who want to risk arrest and sneak a listen to WWVB find they cannot do so during solar storms. This has hindered major industries such as web hosting and car manufacturing, of which there are virtually none in Manitoba and Points West. Fishing fleets seeking Atlantic salmon and striped bass are likewise hindered in that part of the country by, among other things, no reliable time standard.

It is not as though the Royal Observatory lacks for budget, but the House of Commons has turned a deaf ear to requests to build a transmitter in The West, concluding that it would have to be built on top of a mountain or something. Happily, a new federal program aims to equip each of the nation's Eskimos with a GPS wristwatch.