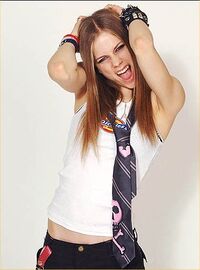 Christ, we get it, you own a lot of neckties.

Avril Ramona Lavigne (born 27 September 1984) is a Canadian singer-songwriter and actress — just one of many young females who are convenient sockpuppets for music industry professionals. Originally, she was a sockpuppet of a trio known as The Matrix, spearheaded by Lauren Christy, a failed pop star notable for writing one minor hit before realizing financial success in the music industry was easier to achieve when manipulating a teenager from backstage. Lavigne has been passed around to other puppeteers since then, including the ubiquitous Max Martin.

In 1999, a 15-year-old Lavigne won a radio contest that allowed her to appear on stage for fifteen minutes with Shania Twain. During those fifteen minutes, Antonio Reid, the head of Barista Records, decided she had that "underachieving teen punk" look that would allow him to sell her to teenagers who enjoy skateboarding. Thus, he offered her $1.25 million to allow The Matrix to insert their arms into her from behind and parade her around stage, flapping her mouth with their hands. Lavigne accepted, the three members of The Matrix made reasonably tight fists, Lavigne assumed a squatting position and allowed gravity to do its job, and the marriage was consummated.

For those without comedic tastes, the so-called experts at Wikipedia think they have an article about Avril Lavigne.

In 2002, 18-year-old Lavigne released her debut album Let Go, a reference to the fact that the three hands clenching her tonsils had begun to cause her significant discomfort. Let Go was spearheaded by the single "Sk8er Boi", which appealed to skaters because it mentioned them. As the "skateboarder" was still a nascent cultural identity, skaters were beside themselves with joy at their existence being acknowledged by mainstream corporate pop music. The song began with the lyrics:

This "song" swiftly became one of the most major RaDI0 HiTZ of the 2000s, which probably says something about that decade. Unsurprisingly, Lavigne was swiftly sued by the estate of William Shakespeare for so blatantly stealing the prologue to Romeo and Juliet. However, even this lawsuit failed to derail the success of the song, due to a prevailing opinion among skaters that Lavigne was more culturally relevant than Shakespeare and that he was probably somehow stealing from her in the future (several marijuana-inspired diagrams of this theft were produced in support of this assertion).

Encouraged by Lavigne's newfound popularity, The Matrix flapped another follow-up hit out of Lavigne's jaws, this time with the following lyrics:

Unsurprisingly, Lavigne was again sued, this time by Hideki Naganuma and Bruce Hornsby for so blatantly stealing lines out of their songbooks. Following the lawsuit, Hideki and Bruce now receive songwriting credits in the album's liner notes. 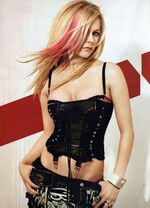 Lavigne's death (career-wise, though some speculate she indeed died and was replaced by a more-talentless clone around this time) is presumed to have occurred sometime around 2007, shortly after the release of her single "Hey Hey You You I Don't Wanna Girlfriend". At least three dozen people are estimated to have bought this single, and all felt embarrassed upon hearing it, saddened by the news of the Real Avril's passing. Even lower lows were reached with her vaguely racist 2014 single "Hello Kitty".