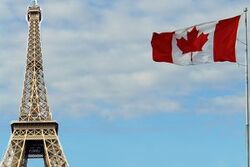 “For the LAST TIME, the mountain's name is not Real, it's Royal!”

“Ma, Mon'real, what a great city for business!”

Montreal is a semi-habitable island in the Greater Toronto Area, located in the semi-independent realm of Quebec. Formerly known as Mount Doom, the island with its volcanic mountain (highest elevation, 6000 m) is famous for being the headquarters of most conspiracies on Earth. The mountain, with its large nuclear silos hides a massive system of underground tunnels which serve as perfect plotting place. The Black Watch continue to occupy the city; A small armed rebel group called the "Coward Toads" is believed to be hiding somewhere in the eastern part of the city.

The island of Montreal was accidentally stumbled upon by some citizens of the Quebec City colony that headed up the St-Lawerence River hoping to score some contraband cigarettes from the locals. The venture’s decided that the island would be a choice location for another colony and set up shop immediately. They were able to survive on the island with the aid of the local native Iroquois tribes that provided food and shelter throughout difficult periods. The colonists were kind enough to repay the native tribes by introducing them to alcohol, influenza, genital warts and syphilis.

The city was given various names under French rule, including: Hochelaga, Villa Maria, Mount Real, Mount Royal, Mount Doom and Monterey. The island of Montreal takes on the shape of a huge penis with a protruding overgrown left testicle but this attribute was surprisingly never the inspiration for the city's name at any time though out its history.

To promote cultural cohesion within the colonies all assimilated subjects of the French crown were forced to maintain French as the official language, keep close ties with the unified Catholic church, and be proud of their French heritage. When the English General Wolf won Quebec for Britain by defeating the French General Montcalm on the Plains of Abraham, Montreal was transferred to English rule. The British crown did not enforce cultural or religious integrationism since no one is good enough to be English except for the English. 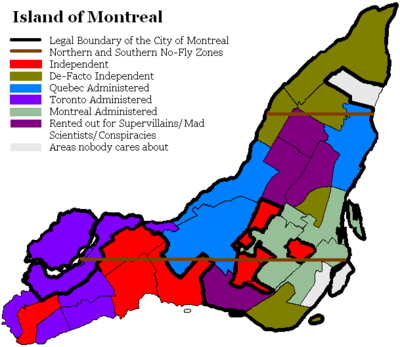 Montreal, has a democratically elected city council and seats can be held by any member of the community as long as they belong to an organized crime family, biker gang or own a construction company whose contracts are awarded by the city. Montreal is divided into burroughs that are maintained by lower ranking officials who siphon taxpayer money into endless construction projects that have to be re-done almost immediately after completion. The city also runs an extremely effective Parking Ticket racket to maintain infrastructure such as the Montreal Olympic Statium, the Turcotte Autoroute Exchanger and other feats of engineering that should never have been conceived much less built.

There is little to no crime in Montreal since the sheer size and frequency of potholes that plague the city's roads make it nearly impossible to maintain correct aim during drive-by shootings. Crime is also kept to a minimum in the winter time since no swinging dick can stand to be outside for more than five minutes in the sub-arctic climate, and if a crime is committed a hasty exit is often prevented by icy sidewalks, greatly reducing the probability of car-jackings, muggings, or other forms of outdoor violence.

With all the traffic in the town due to never-stopping roadwork, it is nearly impossible to drive somewhere in less then an hour and less then two tickets per 100km and killing less then three road workers.

In Montreal, the policemen are the ones committing the crimes. They've given up on trying to tame the Montreal drivers so their job mainly consists of picking out civilians from a crowd (preferably immigrants) and shooting them on sight.

With 15 different universities, the island has the largest prostitute-to-student(p/s) ratio in the world - just slightly ahead of Las Vegas and Berkeley. Beer and Poutine are the major agricultural exports and contraband tobacco is the major import. Industrial exports include university drop-outs, bagels, stupid video games, comic book inkers and good hockey players from the Montreal Canadiens.

The climate is tolerable for about two months of the year when the temperature hits a maximum of about 25 C 40 C sometime around July, but it feels more like 75 C with the relative humidity approaching 200 per cent. An average temperature of -100 C is observed for the remaining ten months of the year thus freezing solid any living creature that attempts to step outside during this time. By January one meter of ice blankets the entire island and Montrealers begin to experience three months of total darkness; these factors make Montreal the most hospitable locale west of Newfoundland.

Montreal is so cold that all the citizens live in igloos just like everyone else in Canada.

Spring and fall are 3 and 7 days long respectively. It is not unusual to swim in your pool by late October and skate on it the next day. The upside is that nothing poisonous, creepy crawly, or gross can survive this climate so that Montreal can be considered phobic friendly. The freakin bears are another matter....

Montreal is known to be Canada's unrivaled Hipster capital, and possibly for the entire America. This fact has been observed through several socio-economic studies that revealed most young Montrealers spend more than 2/3 of their paychecks on shiny clothing and mundane house parties where sexual abuse and overall stupid comments, plagued with self-hatred and depression, are the other common denominators.

Due to the somewhat hard climate, the Montrealers have built a massive tunnel system, which is 89.4% cooler than Lompoc retarded skyways. The population, upon seeing the coming winter, will instinctively burrow into the many burrow holes (potholes) and hibernate for six months, awaking only to buy more alcohol or to have sex.

Obesity, on the other hand is low, constant shivering from the cold = lotsa calories burned. By the end of winter, most natives have dropped 95% of their body mass, minimum. Immigrants who do all the work and get nothing in return, but marry young fat french rejected girls to get Canadian citizenship.

Usually children ride polar bears to go to school, somehow parents having experienced Le Grand Verglas back in 1998 prefer ski-doos because they can stay under a meter of ice without dying.

Montreal has a worldwide reputation for both its strong feminist/lesbian scene and its stunning variety of weak-minded club hotties. For these reasons, most strong, intelligent straight men who do not work in organized crime will leave the city before they turn thirty. An interesting side-effect of this cock-drain is that there are approximately 4 females to every 1 male in the heterosexual community. As a result of competition, the remaining men have an inflated sense of sexual and marital worth, when really they are washed-up drunks who can often be found playing in shitty bands until they start an after-hours bar at the age of 45.

Culture, Society and all that

During the summer month, the Montrealers will play various games during the three month reprieve, to numb the pain of their lives. Such games include:

The only thing Montreal is really famous for in any context outside Canada is that it is the location of the discovery of Boyd's Law in 1921 by Nathaniel Boyd, an American physicist who often became extremely drunk in Montreal when all of the other cities across North America had run out of alcohol. Boyd was in attendance of a particularly good party by Canadian standards when he began to postulate his law, which is also known as the Law of Alcoholic Effect. Most Montrealers assume the discovery had something to do with them and usually take most of the credit for its discovery.