This article is too Ontario, eat their crops!

"Some fields are not made of dreams."

“There's no poontang like Ontario poontang.”
~ Oscar Wilde on Ontario 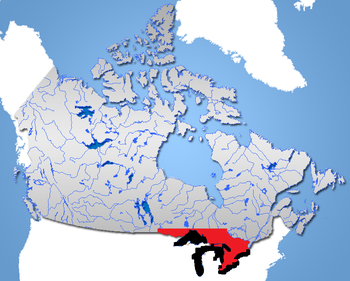 The REAL Mighty Province of Ontario (no politicians care about the north) and its largest tourist attraction: The Great Lakes of Tar.

Ontario, an unimportant part of the Canadian Empire.

Ontario, a suburb of Toronto, is a disputed territory. Recognized by most countries as being part of Canada, it is also claimed by the United States and the states of New York, Vermont, Michigan and New Jersey. In particular, New Jersey asserts that 52,000 of its residents relocated to Ontario during the U.S. presidency of George W. Bush, forming the majority of the province's population. Between 1937 and 1944 Ontario was also claimed by Germany, along with the rest of the world. Ontario is nestled uncomfortably between the North Pole to the north, Russia on the left, and Mordor just south. 69% of Ontario residents are "extremely" or "very" naughty, and diplomatic relations with Santa are poor despite the shared border between the two countries.

The one force unifying Canadians[edit]

Toronto is the capital of Ontario. According to Torontonian mythology, this city is the "centre of the universe" and the seat of the Great God Quetzalcoatl, to whom they gladly give human sacrifices. Torontonians believe that Quetzalcoatl showed them this city as their homeland, by giving them the sign of a beaver holding a maple leaf. Proof of Toronto being the centre of the universe is the CN Tower, which stands like a huge phallic symbol over the rest of Canada. It is in fact the end of the axis on which the earth rotates. The ACC on the other hand covers the earth's anus. In return, Torontans must appease Quetzalcoatl by regularly feeding him human flesh. Since Torontonian mythology explains why only Canadians are human, the people regularly declare war on other parts of Canada to provide sacrifices to Quetzalcoatl. The one force unifying Canadians is their hatred of all things Toronto, even things that have nothing to do with human sacrifice. That is how human nature works: in Ontario, underaged boys a.k.a "The big Matts" give hand jobs to other manly men and think it`s perfectly normal.

Even so, it was the USA which tried to burn Toronto to the ground during the War of 1812. The only good that came of that effort was that Canada burned the White House in retaliation. Ontarians and Albertans united to pillage most of Washington DC.

In Ontario, the average commute from your house to across the street is 7 1/2 hours. This is because Ontarian policy is to build wagon trails instead of real roads.

In 2005 a cloaked figure created moose bacon. This food has been cherished as red gold now.

Ontario has been scientifically measured as the gayest province in Canada, with a 3.3 gay units, followed by Quebec, having 7.3 gay units (Liberace had 2.5, Elton John 1.1).

Perhaps because of this, the city is known for its burgeoning Post-hardcore/punk/disco-emo-prog/hard rock/harder rock scene.

Toronto has the world's longest street: Yonge Street; and the world's longest parking lot: the 401 Freeway. Torontonians pay $20,000,000,000 every year towards road improvements and therefore has greater gridlock than any other city in Mexico. Toronto's infrastructure was designed by the best mediocre students in City Planning from Naples, Italy and Calcutta, India.

Washington DC claims to be very friendly to Ontarians.

Strangely, Ottawa (which should be a city-state) is part of Ontario and must conform to provincial laws. Ottawans, however, aren't limited by Ontarian laws, because they can simply cross the national border using one of several bridges and party in Gatineau where pedophilia, sodomy and kitten huffing are endorsed. Partying in Gatineau is most typical of politicians and high school girls. Ottawa is also home to Canada's largest topless protests, however, statistically it is also home to the saggiest tits in the modern world and therefore only members of the bloc quebecois show up with cameras and vaseline.

Also strangely, Toronto is subject to frequent rains of seagull eggs.On these days, it also becomes extremely hot and thus, you can fry eggs on the sidewalk. These days are much welcomed because they are the only days when the 3.5 x 1019 or so citizens(cocaroaches) of Toronto are not very hot, or bloated, because it normally rains steak dinners and is hot enough to cook them on the sidewalk.

Ottawa is where old, rich, and white Canadians go when they retire to party. The televised "Question Period" is really coded discussion about all the 50 year old Vietnamese hookers they did last night. Any women in Parliament are either lesbian, super-lesbian, or just wanna have some fun (ala Cindy Lauper.). Jack Layton, leader of the NDP (the Not Democratic Party of Canada, a ultra-left wing party made up of Russian veterans of the War Against Satan) has said himself he likes the "Big Gas".

As many people know, Ontario is hit by a snowstorm every day. On its lucky days, Ontario receives 25cm of snow. Because of this, Ontarians live in igloos, some as old as 2500 years (constructed by Turkish settlers during the invasion of the Ottoman Empire).

Ontario is renowned in Quebec, and in the rest of the world, as the pinnacle of blandness: a place without a soul. Every year, scores of tourists who wish to be underwhelmed flock to Toronto, where they can admire the finest in unremarkable architecture, and empty lifeless streets where bars and clubs close at 8pm. They look foward to enjoy the company of monochromatic queen-lovers, the proud descendants of servile wimps who, during the American revolution, did not wish to offend King George the Turd in the slightest, preferring to drink tea quietly at home before having motionless missionary sex in the dark with their ugly wives.

The name Ontario comes from the iroquois term 'tête•carrée', which means "the place where nothing happens....ever". Indeed, Ontario has had an embarassing streak of producing forgettable, lacklustre singers and songwriters (Avril Lavigne, Bryan Adams, Sum 41, Shania Twain, Rush... to name only a few). Because of this, Ontario has an inferiority complex in relation to Quebec, which is why they feel they must steal Quebec's culture and try to make it their own in order to appear, if only in the slightest, interesting. Being themselves incapable of producing anything that would be even remotely remarkable, they will make outrageous claims like pretending to be the province from which maple syrup and poutine came from, or being the birthplace of famed hockey players such as Guy Lafleur, Patrick Roy, Mario Lemieux, Maurice Richard, Martin Brodeur, Vincent Lecavalier, Jean Béliveau.

- Every single one of britain's former colonies has managed to forge themselves a distinctive and appealing identity, except for Ontario and most of english Canada.

- If Ontario was a woman, she would be a 45 year old accountant with short hair working in a cardboard company.