Toronto is the largest city in Canada as that is where all the immigrants, migrant workers and slave labourers are sent to toil. It is also home to Rash.

The name Toronto comes from an extinct aboriginal language. This language has become extinct because Europeans came over on wooden ships and 'traded' the land for some blankets infected with small pox and some whiskey (just for clarification, the whiskey was single malt and not infected with small pox. Wanted to be clear about that).

'Toronto' means 'meeting place' -- for hookers, drug dealers and communist pinkos who vote for the NDP.

Toronto is also known as "Clown Town" for the residents who reside there. But most aptly as "The Centre of the Universe" as Toronto residents really think everything revolves around them and their much vaunted city.

Another name that some Canadians have given the city is 'Moronto', for obvious reasons.

Headquarters of the Alien Invasion.

On July 1st, 1965 aliens were orbiting the Earth and looking for the perfect site to start their colonization plans. Their requirements included finding a submissive population that would make good slaves and a cold climate that would be suitable for their master lizard race.

Toronto seemed as good a place as any so they landed their alien ship and slapped a sign on it and called it 'City Hall'. No one really seemed to notice and they promptly infiltrated the local government. Many important Canadians immigrated to Toronto on this ship, including Stephen Harper (lizard concubine to the Queen), Mel Lastman who went into deep cover so he could be a 'NOOOOOOOOO-body), and a genetically modified ape playfully nicknamed Rob Ford.

Toronto has found itself as the butt of many jokes but nothing more unlikely as the fact that this, the self-proclaimed greatest Canadian city, is the fact that they cannot deal with Canadian Weather. Minor snowstorms meet with much angst, panic and ostrich maneuvering ( ie : put head in ground) that is laughable by Canadian standards. Sadly, in the winter of 1999, the people of Toronto called out the military. Four hundred soldiers, backed by armoured vehicles, took up posts in Canada's largest city, ready to help get the crippled metropolis moving again. Maybe people just didn't have shovels, maybe they just didn't know what the white stuff was. Only they will know as other Canadians just did not and still do not understand . Alas, the people in The Centre of the Universe, the prime, the best of Canada were lost. Toronto's mayor, Mel Lastman,(another bad JOKE) made the plea. Lastman has pleaded with businesses to tell their employees to stay home and give the crews a fighting chance against the 80 centimetres of snow that have fallen in recent days. Seems city employees could not keep up, (no surprise there!) Even the head of the Toronto Transit Commission, David Gunn says transit users should "Stay home. If it's snowing, I would stay home. That's my best advice." It's advice that now in 2011 has Torontonians on Snow alert autopilot. See snow, ... hide. Statements from Other Canadians: Carl from Saskatoon " hahahahahahahahah....", Meg from St'Johns "wimps", Mark from Winnipeg "many expletives and laughing followed by "damn thin-blooded weaklings" , and finally Ngyuen from Vancouver "snow? Ry you no call?" The legend now created in 1999 lives on. In the winter of 2010 an anticipated threat of a marginal snowfall had the City shut down most services, including schools and businesses. Only this time and quite humourously to have the storm veer wide of TO and virtually no snow falling! The army was put on alert, but being overtaxed by actual things to do, ie: Afghanistan, they were not available. Which leads the writer to wonder, what would Toronto have done if the storm had actually hit? Would Toronto survive? Would its populace just close their collective doors, shutter their windows and call it quits till spring? One thing is certain knowing the weather in Canada, one day we will find out.

The finest vehicle in the TTC fleet.

Getting around in Toronto is very easy for visitors. Toronto has a state of the art transit system that utilizes the most modern of technology. The TTC is headed up by the ghost of Karl Marx and has a dedicated and hard working labour force.

Really, the TTC is a group of losers from places like the Soviet Onion who don't care. They're happy as long as they get paid. They like to sleep on the job. Sometimes it is like they are trying to be useless. (Got to go - I'll edit this later. I've got bassoon lessons with my Lithuanian teacher Chovski)

In 2010 the TTC faced bankruptcy, because too many employees had fallen asleep at work and people had stopped putting their fares into the box on a voluntary basis. The fact that fares had increased by 1000% in the last two years because TTC employees demanded a day spa and Craftmatic beds in their lunchrooms may also have been a contributing factor to the TTC's financial woes.

Rip Van Winkle, TTC's employee of the month was quoted as saying "I fully expected that some people would not pay their fare, and I was okay with some of them getting a free ride, after all, I am getting a free paycheque". 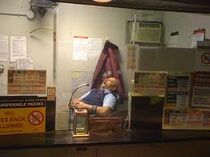 A typical day at work for a TTC employee.

In an effort to improve TTC efficiency alien overlord Rob Ford decided to bust up the union and hire the Flying Monkeys from the Wizard of Oz to run the transit system and deliver disgruntled union members to the witch's castle known as Buckingham Palace. Even so the Yonge line is always overcrowded, at noon it is sardines, at 9pm it is sardines, on Sunday afternoon it is sardines. Don't even try to take the #36 bus during rush hour unless you want to rub shoulders with a zillion Crips and Bloods from Jane and Finch or Rexxxdale.

TTC buses exist outside of time. Scientists say that one day, it may be possible for us to visit the dimension that corresponds with the bus schedules, but for now, it's best to look at the schedules as a list of the times when the bus will definitely not be there.

Recently the TTC approved and finished the Union Station second platform project, which was originally created to increase the station's sardine capacity and provide better access to larger customers such as Rob Ford, who suffered from an incident while riding the subway back in 2010.

Toronto is full of zombies who circle endlessly around the city, driving from big box store to big box store, creating crazy traffic jams. Whenever there is daylight, all local freeways are congested. The 407 (Four Oh Seven) costs a million dollars per km to use and is exclusively reserved for the use of Bill Gates and Warren Buffett. Nevertheless, experts predict that it, too, will one day become congested - if only out of embarrassment at being the only non congested highway in the area.

Toronto Condos cost a zillion dollars. In Yorkville you need to sell your kidney to buy one. If you want a house either make a zillion dollars or torture yourself for the rest of your life driving on the "Don Valley Parking Lot", the "Gardiner Parking Lot" or "Collector Express Hell (aka Four Oh One)" to Nuclear Power Plant Land (Pickering), Flower Town (Bramladesh), Steeltown (Hamiltonia) or Government Motors Land (Oshawa).

It is worth noting, however, that Toronto condos deliver extra value in terms of falling glass (usually from glassed-in balconies, which are cheaper and less sturdy than those with concrete/cement or metal rails and facings). In addition, condo owners in Toronto have recently discovered, thanks to articles in the CBC and the Toronto Star that their condos offer opportunities to spend further money beyond their bloated initial purchase price - many of these condos were sheathed in inferior quality glass the seals of which will fail, reducing their insulation value and causing water damage. Repair costs are estimated to be in the millions of dollars per building. The extra heating costs occasioned by the poor insulation values will be, according to experts on building envelopes, "fucking unreal".

Every four years Toronto holds the a contest for Emperor. Known as the Polar Bear Swim, candidates for Emperor jump into the freezing cold waters of Lake Ontario. Whoever can stay in the water the longest becomes the new Emperor. This explains the tenure of many of the Emperors who did not actually do anything as they were really frozen corpses that were crazy-glued in the Emperor's throne. Their often quizzical gazes, sometimes mistaken for deep thought, were actually caused by their eyelids being glued open.

Toronto has been known widely for more then a few colourfullpoliticians. Mel Lastman was a real brainiac, a man of many words, funny stupid words.

"What the hell would I want to go to a place like Mombasa for?...I just see myself in a pot of boiling water with all these natives dancing around me."Said in June 2001, before Lastman's trip to Kenya to support Toronto's 2008 Olympics bid. During the SARS breakout the World Health Organization put a travel advisory for Toronto. Poor Mel had no clue what this organization was and stated "They don't know what they're talking about. I don't know who this group is. I never heard of them before. I'd never seen them before," It could be said that Mr Lastman was "not too smart" even "a moron", some would characterize him as say "dumb as F&*k". But no matter what one thinks of Mel a dimmer shabbier truth is that Torontonians actually Voted him into office Nuff said.