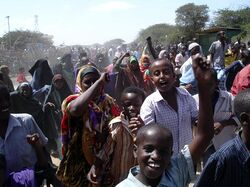 A group of typical Ottawa residents gather for a friendly game of street hockey.

Ottawa, the nerve-centre of Canada's socialist experiment, was recently awarded (for a record 63rd consecutive year) the "Friendliest City On Earth" trophy. Residents are proud as fuck over it, and vow to continue treating visitors and neighbors alike as though they were family. Ottawa sits at the confluence of three major rivers, which are continually gushing tons of water at any given moment, making Ottawa one of the worlds most water gushed cities in the recorded history of water gushing in the world. Ottawa was voted the cleanest city of the planet by the panel of the global committee for people who vote on things like which city in the world is the cleanest, among many other voting stuff. Also, there are absolutely no immigrants in Ottawa.

Ottawa began its existence as a natural wonder, a forest of lush green trees, sparkling water and a wide variety of flowers and forraging animals. This peaceful and prosperous life which was afforded to mamals and reptiles and fish alike was brought to an abrupt and brutal end when the Algonquin natives colonised the land with their brutal and unapologetic cutting of trees, the ripping off of deer skin and the spearing of fish so that they could build their colonialistic tents, keep their patriarchal bodies warm and feed their excessive burgoisie appetite. Ottawa would never be the same,

It was in that very city, where the same would never be again, things became slihgtly better when Europeans arrived. Jaques Cartier, a famouse french explorer with a love of ice and frost bite, landed his small boat (or large canoe) on the hill where three rivers meet. Within little time, French merchants set up a timber industry as well as a beaver pelt production supply chain system.

When Queen Victoria was asked to choose a capital for the newly formed autonomous colonies of North America into a socialist experiment, she decided that Ottawa would make a lovely capital, as she not only found the ingenous use of a double consonant in its name (tt), but also believed that a capital that contained both French and English people, as well as native savages, would be a great place to begin the multi-cultural experiment of Canada, which bypassed Ottawa, as Ottawa has no immigrants at all, especially imigrants from Somalia.

Visitors who enjoy -45ºC (-52ºF) will be pleasantly surprised that the weather hits an even lovelier -55ºC some years when taking pleasant walks allong the frozen rivers. Hilights of visits to Ottawa include trying to pry open frozen doors of mediocre museums, listening to the delightly and sexy French Canadian version of the latin language of love, then listening to the honk honk of Canadian geese too old to fly south for the winter (though who sound surprisingly remarkably similar to the lovely French Canadians), skating a few meters on the icy canal (and its subsequent senic journey to the world class central hospital to have your frost bitten foot amputated) and finishing the weekend with a lovely trip to the Parliament hill now in its fifteen consecutive year of scaffolding. 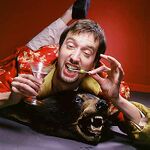 The Ottawa native is unique in that they are most commonly known as the dullest, most bureaucratic, and least productive people on earth. Many a Documentary has been made on this unique species, but producers find the footage too Dull to Show and figure it would cause wide-spread Rioting in the civilized World.

The City is made up of two kinds of natives.

The First is the “Civil Servant”- Found Only in Ottawa, and most Commonly Seen Smoking a Cigarette and drinking Coffee while on strike outside before various buildings commonly seen in postcards. The Ottawa Civil Servant tends to be slow, dull and lazy, as well as a general Nuisance to the Ottawa Environment, the rest of the civil service, and the country as a whole. It is believed that the Ottawa breed of Civil Servant is actually a cross between both french frog (which explains the cigarette's) and the Vogon species. The Ottawa civil servant has also been known to waste huge volumes of money while producing very little.

The Second is the “Techie”. There is little seen footage of the techie, but from personal experience I know these folk are pale in appearance as they rarely leave their Dwellings. We speculate that these folk have never seen the Sun. Food is delivered directly to their dwellings in order to minimise exposure to the external World. These natives tend to live alone in large dwellings, and are consistently connected to the Internet, usually doing dull and mind-numbing tasks like editing Wikipedia. No mating habits have even been recorded to date, and scientists continue to be baffled by their alarmingly increasing numbers.

The remainder of the locals are made up of Lost Tourists who mistakenly took a wrong turn, ending up in Ottawa, and Foreign Dignitaries sent to Ottawa for Punishment for crimes committed in their home country (or simply in the hopes that the inhospitable weather would swallow them alive). Many Ottawa residents are actually displaced Maritimers who ran out of money in Ottawa while making the long journey west to Alberta.

There is only one occasion upon which the Ottawa native is not dull; during hockey season, cheering on the magnificently inconsistent Ottawa Senators. Ottawatonians spend days reving up for each hockey game and get too drunk to realise they lose every game.

The obscure city is further immortalized in the song "Pump Up the Jam" by Technotronic with the chorus lyrics "Ottawa... a place to stay. Get your booty on the floor tonight. Make my day." Although, nobody listens to that song.

Ottawa's official food used to be beavertails, but has since become Poutine, a grotesque mix of french fries, gravy and greasy st. albert's cheese curds. The collective weight of Ottawa's population has gained 773,454 tonnes since the Poutine Revolution.