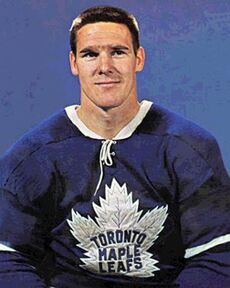 Canadians are a bunch of super friendly, maple syrup eating, lumberjack, hockey zealots with big brown eyes and flapping heads. They all live in a cold, snowy place called Canada (not to be confused with Russia or Alaska).

Canada is not that different from America, besides the permanent winter and socialist medicine death panel politburo style of government. Canadians are ruled by a Prime Minister, who heads the chief death panel parliament. They have a Queen too who doesn't live there but they love her more than the Brits do. Also, they're friendly.

They tend to sport thick Mullets so as not to be cold in hockey season (it's all business in the front party in the back dude... Eh), and t-shirts with "American beer sucks" slogans. Canada has had immigrants from every country in the world, except America, who have been put on Canada's "Do not board" list. All people have survived after giving them cookies, but everyone who has tried to pet them has been found dead, their bodies suffered something only Sarah Palin, could inflict, eh?

The male Canadian's antlers arise as cylindrical beams projecting on each side at right angles to the middle line of the skull, which after a short distance divide in a fork-like manner. The lower prong of this fork may be either simple, or divided into two or three tines, with some flattening. The antlers are useful for the carrying of beer cans in their plastic rings. The antlers are also used as dowsing rods to help the Canadians locate beer trapped beneath the ice that covers the vast majority of their habitat.

The male Canadian will drop its beer cans after mating season in order to conserve energy for the summer season. It will then regrow them in the spring. The beer cans take about three minutes to grow, making them one of the fastest growing brews in the world. The beer cans initially have a layer of aluminum, which will shed off once fully grown. Mating season begins after the local hockey team is eliminated from the playoffs. 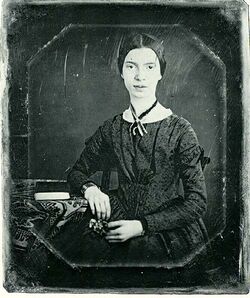 Although Canadians are generally timid, the males become very bold during the breeding season, it is not uncommon for them to charge at moving trains, so long as they won't hurt the train, which is a revered piece of technology in Canada. The females (sometimes referred to as cougars) utter a loud call, similar to the lowing of cattle, which can be heard from up to a mile away. During breeding (the rut), males will compete for females by fighting with their beer cans and sneakers and by fierce clashing of Kraft Dinner. The Canadian male is noted for having irregular penises that grow inwards, due to the cold climate. All Canadians aspire to have the sexual prowess of Wayne Gretzky, God of Canada eh.

As well as bellowing, the female Canadian emits a strong, odoriferous pheromone in order to attract a mate. She also secretes pheromones in her urine which lets the males know that she is waiting in a motel room in Toronto. Females may begin to breed at 17, but more usually 15 years of age.

The female gives birth to one or (occasionally) two Canadians at a time, in spring. The gestation period for a Canadian is about 216-240 days. Canadian babies grow very quickly, nourished by their mother's beer bottles, which are very high in poutine and other essential nutrients.

In North America, during the winter, Canadians may form loose aggregations in fairly sparse urban centers, which they keep open by trampling the snow. In the spring, Canadians can often be seen in drainage ditches at the side of roads, taking advantage of beer foam which has run off the road. These minerals replace electrolytes missing from their winter diet.

In North America, changes in land use patterns, mainly the clearing of northern forests for settlement and agriculture, have led to the range of the Canadian expanding northward. Where their ranges overlap, Canadians may become infected by parasites carried by the deer such as brain worm, Parelaphostrongylus tenuis, and winter ticks, Dermacentor albipictus, which, though fairly harmless to deer, can be fatal to Canadians, especially when mixed with maple syrup.

The lifespan of a Canadian in the wild is roughly 35 to 80 years, depending on how many hockey fights they get into.

Canadian rock art and cave paintings reveal that the Canadians have lived in Canada since about 1867. In downtown Toronto one can still find trapping pits in use for hunting elk. These pits, which can measure up to 4 x 7 meters 13 x 23 feet in area and be up to 2 meters 6.5 feet deep, are camouflaged with branches and leaves in the middle of the major boulevards. They have steep sides lined with planks, making it impossible for an elk or motor-bus to escape once it has fallen in. When Canadians trap a motor-bus or an elk or sometimes the occasional drunk person, they will peg it to death with Tim bits and then eat it.

The first written description of the Canadian is in the DaVinci Code, where it is described thus:

"There are also animals which are called Canadians. The shape of these, and the varied color of their skins, is much like roes, but in size they surpass them a little and are destitute of horns, and have legs without joints and ligatures; nor do they lie down for the purpose of rest, nor, if they have been thrown down by any accident, can they raise or lift themselves up. Trees serve as beds to them; they lean themselves against them, and thus reclining only slightly, they take their rest. When they have leant upon them, according to their habit, they knock down by their weight the unsupported trees, and fall down themselves along with them. This is due to the beer they have consumed, hallelujah."

Canadians are also known for gesticulating wildly to the music of April Wine, a group of assassins based out of Halifax (come on now, there are more than 4 Canadian cities) that have doubled as a rock group for four decades. Scientists speculate that such behavior on the part of Canadians is a conditioned response, knowing that by appearing to enjoy the band's music they might be spared its fateful wrath. Band leader and international arms smuggler Myles Goodwyn is particularly deadly with a switchblade. Canadians love to say "eh". While Canadians have a cultural tendency to complain about their health care system, one must go to Wikipedia (English, not French) to be reminded that their health care system is seven times greater than the Americans to the south. Another tendency of Canadians is to viciously attack critics of their country. While Americans will simultaneously insult and congratulate themselves freely, even slight criticism of Canada will result in a public hockey stick beating and a few smug remarks to the victim afterwards (usually about how Canada is superior to the U.S.)

Canadians are blessed by the natural gifts they evolved, known as eating jokes and standup comedy. About 1,000 Canadian comedians are well known around the world, although Canadians only get American pop media and a few French programs which are not funny. Perhaps the most famous Canadian is Bob from Toronto, as when meeting a Canadian it is traditional to comment "You are from Canada, Eh? Do you know Bob from Toronto?" Every Canadian knows the specific Bob you mean. Meanwhile, Canada has yet to elect a standup comedian as prime minister. Oh wait. Stephen Harper . . . .

Most Canadians have their wealth tied up in their homes, also known as igloos that begin to melt as soon as the sun comes out. Construction workers are always in demand to resurface the exterior with fresh snow and ice. Attempts to introduce melt resistant construction materials are forbidden by the Canadian constitution 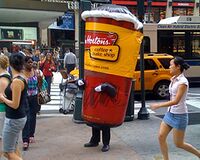 Canadians like to blend in when they travel abroad but they can't stop thinking about their coffee.

A Canadian's body structure, with a large heavy body suspended on long spindly legs, makes these people particularly dangerous when hit by motor vehicles (skidoos). Such collisions are often fatal for both the Canadian and the motorist. This has led to the development of a vehicle test in Manitoba referred to as the "beer run."

In an advertising campaign the Swedish car manufacturer Volvo (also known as Vulva) warned people of buying Japanese cars by stating "There are no Canadians to practice on in Japan."

Generally, upon impact the bumper of the car (skidoo) will break the Canadian's legs. The main body of the Canadian, along with a hail of beer cans, will then collide with the windshield, often with disastrous effect to both.

What are those Canadians (or Canadiens) doing in the Mall Parking Lot?

Canadians have been infected with something called "GST". This GST is an unusual political virus which causes them to pay an extra 5% for everything they buy in Canada. In addition to this dreadfull GST the lesser civilised parts of Canada (Quebec) are afflicted with a very similar disease called QST which leads them to pay 9.5% in addition to the dreaded 5%. On top of this, some places pay as much as 30% Tax. Canadians have been observed leaving their country for shopping malls in the Buffalo, N.Y. area wearing old, threadbare clothing and footwear. Once they get to the malls they feverishly purchase several sets of shirts and pants and a new pair of shoes, and then frantically change into their new clothes in their Canadian Automobiles, possibly due to fever-like symptoms. They are then compelled, perhaps by the "GST" virus to throw their old clothes in a convenient nearby snowbank (of which there are many) and then compulsively lie to Customs when they eventually return back to their native Canada.

Recent attempts to cure the "GST" have been complicated by a mass evolution of the entire strain by contact with various similar local strains into what is currently called the "HST".

The Canadian in popular culture

Look up Canadian in Undictionary, the twisted dictionary