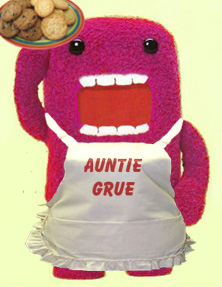 Do not fear the Anti-Grue! She brings cookies just for you!

Just as there is an antichrist for Jesus, there is an Anti-Grue for the Grue. Though the topic is debated, there is believed to be only one Anti-Grue in existence. The Anti-Grue is said to possess great powers. Some include, but are not limited to, the following: mowing the lawn, baking chocolate chip cookies with M&m's and an assortment of human flavored worms, telekinesis, brewing rum, and eating crackers. It is speculated that The Anti-Grue dwells in the core of the Earth, waiting for an opportunity to fulfill its destiny. The Anti-Grue passes its time waiting by honing its skills in the usage of extreme sarcasm, a well known weakness to Grues. The Anti-Grue is said to have a much different appearance than a Grue, but as nobody living has seen it, this cannot be confirmed. In The Anti-Grue Prophecies, a series of books written by Donald Trump in 2012, it is described that in the year 2011, The Anti-Grue shall rise to the surface and assume complete control of the known universe. The prophecy also states that the Grues will start an epic battle against The Anti-Grue. Many experts have suggested that this would completely destroy the country of Pakistan, as well as producing a massive surplus of cranberries, and naked wolves.

In times of great and dire need, one who is well-versed in the art of lemonade can summon The Anti-Grue. In addition, the individual must prove themselves worthy through 14 grueling (or rather, anti-grueling -- Anti-grueling... yeah, right) tests of faith in The Anti-Grue. It is unlikely that anyone on Earth has the qualifications as of now, other than Bruce Lee. It is said in The Anti-Grue Prophecies that if summoned, The Anti-Grue would throw the world into an ice age, and destroy all souvenir shops in Costa Rica. This, of course, would greatly anger the Grue population, as they make up the Costa Rican Oligarchy. Before the Grues could attack, The Anti-Grue would buy out Marlboro cigarettes, and sell them to the Grues, killing them of lung cancer and emphysema. Then, the apocalypse would occur, and The Anti-Grue would migrate to Sweden, as the Swedes would survive the apocalypse because of their lack of souls. The balance in the universe would not be at peace once again.

Although Anti-Grue has an incurable, vicious case of chlamydia, she takes medication regularly. That, with immaculate genitalia the Anti-Grue cannot be stopped. neither can it's overwhelming supply of various flavors of ridiculously shaped cookies.

The only person known to pass the tests to summon the Anti-Grue, other than Bruce Lee, is the Anti-Grue's all-powerful, Oprah-hating nephew.

It is alleged that Professor Steven Hawking of the Mangina institute has the knowledge of a special dance to summon the all powerful Anti-Grue but for obvious reason lacks the ability to perform said dance.

Longcat's evil anti-opposite 'Tacgnol' has created Anti-Grues in the way past. Most of them died for no reason. Thus leaving one.

What To Do If You Ever See The Anti-Grue[edit]

This, of course, is completely irrelevant. You can NEVER see The Anti-Grue, as he moves at a speed of Mach-Fleventy Million miles per hour. However, if you see a flaming red object shoot out of the ground, you better run. The only place where you could possibly be safe from The Anti-Grue is in a Burger King, as The Anti-Grue is allergic to the Texas Whopper. If you do go to the restaurant, if you really want to live, you better buy The Anti-Grue some goddamn curly fries(or cookies with various flavours of people in worm shaped gummies), and then he just might spare you. If you're not near a Burger King, you have one choice: curl up in a fetal position and await your inevitable death. Of course suicide might be a better option, since if he likes the sound of you he might use you as his personal sex slave. He likes em when they're feisty (or eating pie) .

The best way to protect yourself from the Anti-Grue is to not live in Chicago. Chicago has no Burger Kings, and it also has the largest population of Grues in America (Barack Obama is known to house gruepie,and grues love gruepie). The Chicago Grue has evolved past the average Grue's limitations and can walk in broad daylight (as long as he is wering a glass airdome like sandy cheeks and a pressure suit). This makes it a very likely place to see the Anti-Grue, most likely trying to feed the Chicago Grues hot dogs with catsup, their only weakness. Also, Chicago doesn't have any Burger Kings. Seriously.

The Questioned Sexuality of the Anti-Grue[edit]

Many people have questioned the Anti-Grue's sexuality, it refers to itself as a he but is constantly seen in a maid's apron and with pink skin. The Anti-Grue denied all of these accusations and stated: " I'm just curious". The press was satisfied until one lone Paparazzi took pictures of the Anti-Grue naked exposing his male and female genitalia, the Anti-Grue was revealed as a She-Male and the Press had a field day running constant stories on the Anti-Grues deformities. The Anti-Grue was traumatized by these events and after much persuasion agreed to go on Dateline for an interview, revealing how his parents left him on the side of the road as a child, how he was found by and raised by elves. He revealed their strange mating rituals, involving a horse and a blue whale. They gave him medication to grow a vagina, the interview was then finished because of a flash flood. The Anti-Grue was down on its luck, so he decided to market the only product he could find, Aunty Grue's Special Genitalia Growing Herbs. The sales were off the chart, for this many credit the Anti-Grue with starting the sexual revolution. 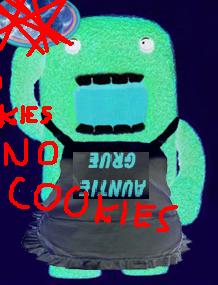 “The eurg-itna probably 8 itself and caused something dimensional portal related. Hopefully that portal doesn't lead here.”

Some people believe in the legendary Eurg-Itna, a mystical creature who, believers say, will one day rise from the huge crater where the Anti-Comma and Comma met, and destroy all unworthy and distrustful grues, eurgs,ubergrue and the anti-grue, Jesus, Bananarama, and rick astley (yes, that's right, NO ONE IS SAFE.), before proceeding to eat Nom Nom Nom... humanity, dooming mankind, and ending life as we know it. Unfortunately, unlike it's distant relative, the Anti-Grue, the Eurg-Itna WILL NOT GIVE YOU COOKIES. or a pen. One of the only things that can kill Eurg-Itna is Kratos or Kenny McCormick

How to Destroy An Eurg-Itna[edit]

It is possible to hurt the Eurg-Itna. The only thing you can do, is feed it cookies with catsup and it will asplode. Or you can summon Kratos but either you'll be killed before doing so, or you'll find out you don't have enough money to summon him(the fee is RIDICULOUSLY FUCKING HIGH!!!!!) and then you'll die. BUT if you do summon him successfully Kratos will kill the Eurg-Itna in 5 nanoseconds, just pray to every God you know of that Kratos wont annihalate everything (and i do mean EVERYTHING) in existence inluding existence itself excluding himself since he has a REALLY bad habit of taking things WAAAAAAAAAAAAY to far in a fight.

What happens when a Grue, an Eurg, and the Anti-Grue collide?![edit]

Weird Al once tried to set an Eurg against an Anti-Grue. He beat it (or ate it) shortly afterward so as not to wind up inside one of them, so the results are not known, but it is known that nine months later the Eurg gave birth to the world's first Anti-Eurg. The universe lost a lot of cheese, but Weird Al, being somewhat nerdy, had it on backup. 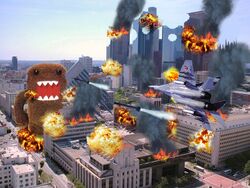 When these monsters all come in contact, it will create the Mega-Gruyurg. Apparently, Grue+Eurg=ASPLODE! But the effect of certain chemicals in the Anti-Grue's body voids it out. Yet, the power of the Grue's and Eurg's collision is too powerful, and still has the ability to at least bend things in the universe in a 20 foot radius. Most of the time, only the grues are occupying the 20 foot area. The power mixes around the universe in the area, universally morphing the three monsters together into the Mega-Gruyurg. Words can't describe what it looks like, in English. The Mega-Gruyurg has the divine power of getting rid of powers, shooting lightning from its mouth, and expanding its jaws, its mighty, terrifying jaws. The Only way of stopping it, is by getting rid of the Mega-Gruyurg (Throwing it somewhere into space), however, any being within a 5000 light-year radius will be eaten/stomped/destroyed/asploded.