From Uncyclopedia, the content-free encyclopedia
(Redirected from Elves)
Jump to navigation Jump to search

Though this looks like an Elf, it's actually an Elvish Impersonator.

“Go not to the elves for council, for they will say neither yes or no, they will simply rip your legs off and use them to beat you to death. And that's if they like you.”

Elves are a race of immoral creatures, remotely related to human beings through extensive interbreeding at Agent Elrond's Palace at the end of the Third Age. Main physical differences are that they have pointy ears and get +2 to DEX, -2 to CON and a +2D6 to SEX APP, except those ones who fought a bit too clumsily in the Middle Ages and subsequently carries a network of badly-healed facial scar tissues.

The 10th-Century Icelandic poet Thrund suggests that they also have infravision, but other sources suggest that Thrund was huffing something. Most modern scholars recognise that whilst Elves had infravision in Thrund's day it is no longer the case. Modern elves exhibit 'Low Light Vision'.

Elves are smaller than pixies. 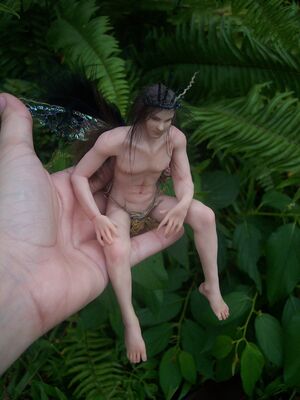 Elves reproduce by a special form of fission called "twelving": Using a sharp, heavy instrument such as a sword or axe, the elf's mate cuts him or her in two from head to crotch. This method was famously described by William Shakespeare in "Cleaving yon Elfe in Twain"; twain-elf eventually became shortened and altered, first to twelf and then, finally, to twelve.

Humans created the word "elvish", which comes from "s'elfish", a term used to describe original commercial transactions between humans and elves.

For those without comedic tastes, the so-called experts at Wikipedia think they have an article about Elf.

Same as a non-blue, smallish smurf (see The Smurfs) and prevalent around Christmas Day, Elves make up the predominant population of Iceland. See for example Bjork.

In the sixties, the Elves were frequently allied with the Mod community, as their ancient enemies the Dwarves had allied themselves with the Rockers.

Recently, elves have been known to impersonate dwarfs in an atempt to be known as "little people" instead of midgets.

Elves in the North Pole[edit]

The Great Northern Elves or Christmas Elves are a great society of Elvi that was enslaved by a tyrant king (Klaus Nikolai) whom the elvi voted into power by mistake as they were enticed by the promise of "a glass of milk and cookie in every home". The whole populace is now laboring year round in a sweat shop at the North Pole that produces hi-tech devices for Japan and Toys-R-Us. The Christmas elves are now known by their slave name - Santa's Elves.

In spite of superficial similarities, the Elves and the Vulcans are mortal enemies and have been ever since Agent Elrond ordered the assassination of Ambassador Sarek in the 23rd Century.

The primary difference between Elves and Vulcans is that the planet Vulcan has greater gravity than Torril, giving Vulcans a +2 to STR, compared to Elves -2.

His knowledge of Star Trek and D&D gives the writer of this piece a +2 GEEK BONUS.

Whilst the reader of this article who laughed at the aforementioned sentence gets a +1 geek point, but -2 strength (real men don't spend time laughing in front of computers, they get sweaty and hug each other, viz. football).

On Earth in 25 AD, the emperor Tiberius, who was irate from the fact more people worshiped James Tiberius Kirk more than him and that he had no Bible-bashers to fight yet, ordered the great nerd purge and as bait to rat out trekkies who proudly correct any mistakes (see above), used to his advantage the not-widely known difference between elves and vulcans.

Nothing is known about the relationship between dark elves (drow) and Romulans, not because the two kin have not had contact, but because nobody who is worth listening to cares about either, consequently no record persist. Although it is clear that Romulans have better cloaks.

The widely publicised killing spree in Paris, 1870 last week, believed to be perpetrated by the notorious defective clone Timothy Olyphant, who was a tragic side effect to the project to produce Mr. 17, an eventual counter force to Justin Timberlake. Elves have been in uproar over the defective clone's recent killing sprees against elves, although the only evidence that the numerous victims have actually been of elvish descent only comes from a farmer high on LSD who finds Runescape a highly intellectual online community, elves are determined to find some flimsy excuse to kill Timothy Olyphant.

Elves speak a language called, surprisingly, Elvish. Elves repeatedly claim that their language is full of beauty and subtlety; however, to hominid ears, every word of Elvish sounds like somebody is whispering "lthppt-thppt-thlppt-lth-lthppt-thppt-thpp-lthththppt" over and over again. The hominids' impressions were confirmed right by legendary hominid Noam Chomsky's legendary 1977 work, "Those Elves and their Silver Tongues: The Beauty Of Repetitive Whispered Thppt".

Elvish has that crazy-ass Welsh double-l sound, the hyper-alveolar laterally-transsubstantiated OMEGA Level-5 Triplex-articulated megafricative of Doom. This sound is so crazy that it has been long since been banned in all civilized countries, and now can only be found in such places as Iraq, Botswana, Bejing, Wales, Sudan, and the Klingon homeworld.

And this is why no one believes any of these groups exist, especially the Welsh.

Elven women are a legal option for men who are normally attracted to jail bait. Elven women are wise, good warriors, and beautiful. Some elven women wear half-nude skimpy armor that for some odd reason protect them from combat this come from the fact that elven women are equip with WMD's ( Weapons of Mass Distraction) which gives them +9000 defense against all attacks, and with these weapons everyone can be defeated.