Klingons are offended by their depiction as having an unusual forehead bone structure. Until the 24th century this was a long standing photoshop joke by Earthlings.

“Today is NOT a good day to die. My appointment list is full for the next week. Maybe I could meet you, say, next Tuesday and you can die there? Mmmmkay then. See ya on Tuesday, buddy.”

Klingons, more commonly known as "map-heads," are super-intelligent beings from the planet Qo'Nos. They are known for their exceptional greyhound breeding program and for their underdeveloped sense of humor, as well as their distinctive forehead ridges. Except in the original series when they didn't have any and where just guys with beards. Did you get that? Neither do we. Moving on... It has become tradition for all communications with Klingons to start with "Fuck yo couch, Klingga!" before any business can be dealt with. Klingons come in two known forms: White Russians, and Black Russians. Like with Vulcans, claims of the existence of elusive Asian-Klingons living in northern space China, space Mongolia and in the Kuril asteroids bordering space Japan have never been substantiated; and Middle Eastern, Pacific Islander and Native American Klingons, as they are with Vulcans, are simply rumors.

Klingons were once a race of peaceful underground explorers who mined all day while singing songs and gathering crystals for their beards. They only became a crazed warrior race bent on destroying humanity after several sexually adventurous star fleet captains arrived looking to explore strange new women, with what started as a bar fight over wanting to slow dance with an ambassadors sister, soon turning into an intergalactic war.

Most Klingons show similarities to Earth's emo subculture. They dress in dark colours, routinely practise self harm, drink copious amounts of questionably produced alcohol, and demonstrate very public expressions of low self-esteem whenever they fail to win. Klingons idolise the great Careless, a pacifist who exhibited these flaws while leading a slightly less mediocre life than his peers. Despite the resulting anti-military stance of the Klingon republic, over the years, a few Klingons have enlisted as soldiers in the North American Space Armada (NASA). Examples include Wolf and BLT.

History of the name 'Klingon'[edit]

Klingons are so called because of the unique electrical properties of their spaceship which cause severe static cling. The only way to prevent this static is by inverting the particle dish and rubbing your feet against the carpet and slowly approaching the vessel, and then place your hand upon the Klingon's shoulder, shocking him and causing a good laugh all around. Klingons, despite their rough appearance, have a fine appreciation of practical jokes, as long as they don't mention forehead ridges or mention their strange skin patterns.

For the religious among us who choose to believe lies, the so-called experts at Wikipedia have an article very remotely related to Klingon.

Estimates state that 4 to 5 percent of the Klingon economy is based on selling dictionaries to male earthlings who wish to atone for their many sexual sins by learning a new language besides the language of love. However, women are generally turned on by the flowing sounds of well spoken Klingon and men who try to reduce their sexual contact through use of Klingon are generally unsuccessful. Not only that but they also learn words like shag and funk in Klingon. The dictionaries currently sell at an average price of 87 plasma warp foilers or 1 bar of gold-pressed platinum; the best sell for 3 fuzzin reators and 3 diputs of Klingon louv jelly (also known as dry targ meat).

The Entire History of the Human Race (With Klingons)[edit]

The Klingon Language is very simple, consisting mostly of the sound q, a aerophobic k, and Q, the bastard child of laryngitis and the whooping cough. 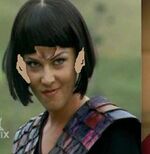