No Klingon celebration is complete without lengthy and prolonged usage of the mythical painstick. While the practice of using painsticks seems completely lost on nearly every other race in the known universe, to understand the painstick is to understand what it is to be Klingon.

Cave paintings show the theoretical use of painsticks.

The Klingon Empire is believed founded on star date 3.1415926 on the Klingon homeworld of Qo'noS by the legendary Kahless the Incredibly Dexterous. Ancient lore spelled out in the cave paintings inside his tomb indicate that Kahless was originally born on the planet Salmon Hipples shortly after the discovery of time. Leadership on Salmon Hipples was fractured and splintered which led to a full scale worldwide conflict, and when that planet was on the verge of destruction shortly after his birth, Ryne Sandburg (a close family friend and part time arobics instructor) secretly sent baby Kahless into the void of space inside a paper mache burrito where he drifted an unknown amount of time until he was found by a traveling pack of space wolves. The female wolves nurtered him and took turns serving as wet nurse and the males taught him to hunt, fight and to use the mighty painstick.

When he matured and reached the first right of ascension, Kahless left his wolf family to found the Klingon Empire, and with him came the painstick and all that the wolves had taught him. In short order he had the empire thriving, teaching his new people the values of the hunt, the ways of the warrior, and the use of the painstick. All three of these tenants are therefore at the core of what it is to be Klingon. Mercifully for their menacing image to their surrounding neighbors, subsequent rulers of the empire abolished the practice of mandatory wolf wet nurses for the warriors. 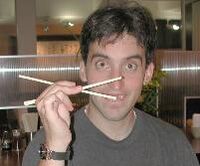 During times of celebration, mourning and for all state functions, the Klingon Empire uses painsticks as a way of celebrating their heritage. In the briefest definition, a painstick is a crude instrument used for the ceremonious shoveling of food from one's plate into one's mouth. Of course the Klingons call them the Heghlu'meH QaQ jajvam (which translates roughly to "wolf tentacles") and hold them in the highest regard. The name painstick comes from all the countless other races who have failed to use them over the millennia.

Not to say that the Klingons have had any better success using them. Legend has it that Kahless earned his title for being the only Klingon (and sentient being) in history to use the Heghlu'meH QaQ jajvam successfully. For most, the use of painsticks is in the least inconvenient and at the most severe, lethal.

In the hands of a trained Klingon master, the Heghlu'meH QaQ jajvam is mostly harmless and mostly useless but in the hands of an unsuspecting novice they become an immediate threat to the user. Physical injuries as mild as contusions and bruising and more severe cases include death, third degree burns and "the itis" (pronounced eye-tiss). Mental injuries include but are not limited to color blindness, acute schizophrenia and bi-polar bear syndrome. These maladies sadly enough have not caused painsticks to lose popularity, for reasons unknown.

A pirate with typical self inflicted painstick injuries

It is common knowledge among the collective histories of the planet Earth that the first wave of Klingons that settled on the planet brought the painstick with them when they settled in the islands in the Caribbean. The first people they encountered were the Republic of International Pirates (RIP) and since both cultures had many base values in common (sadly, the pirates were still unweened from their wolf nurses) they quickly built up a near unstoppable empire on Earth that dominated the shipping lanes of the Atlantic Ocean for decades.

Pirates did not seem to have the mental acuity to handle even the most rudimentary skills of the painstick and their use lead to the pirates going completely insane and gnawing off their own limbs. Their hearty nature seems to have protected them from most direct physical side effects however, and history records very few pirates who ever received more than first degree burns.

The pirates empire slowly moved toward the "East" and before they were wiped out by obtuse schizophrenia (something that caught them and their Klingon friends COMPLETELY off guard) they managed to make "first contact" with several Asian nations, thus ensuring the legacy of the painstick on Earth. Over time however, the ritualistic origins of the painstick have all but become lost to history and modern man seems to use them willy-nillywilly-nilly, with the typical and highly predictable disastrous consequences.