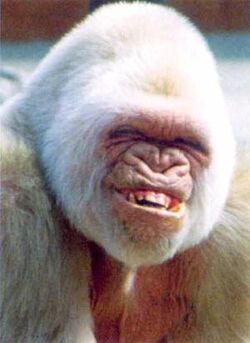 “You know what's funny? Making the world 71% water and then putting SALT in almost all of it so that kids in Africa can't drink it and they die! Hahaha! Now THAT is humourous!”

“In my day, we used to spread humour on our toast and eat it for breakfast. No wait, that's not right.”

~ It seems no one in Norway has any humour. In the meanwhile, sing a song from Asia, Heat of the Moment.

Humour is describing things in a funny way. Humour is the English cousin of the good 'ol 'Merican way of saying humor (the incorrect way) and is nowhere near as funny, because only people with crooked teeth find British Chaps sitting under an umbrella, sipping tea, and telling over-the-top, dry jokes like:

These are the types of things people from the U-knighted Kingdom find funny. Most Americans don't find European humour funny, but just find ugly European people funny. The reason why Europeans are not funny is because they live by a code of chivalry and cannot make a joke that would make anyone but other Europeans laugh.

For those without comedic tastes, the "questionable parody" of this website called Wikipedia have an article about Humour.

Humour is successful depending on how funny it is. People will find things funny if they are unexpected, relative, random, witty, imaginative, crude, slapstick, poppycock, bedruzzled, filled with Oscar Wilde jokes, and relate to stale, unfunny internet memes. These are all things that European humour does not have ergo it is not funny.

To-date, there has never been a reported case of British humour not being funny; even though many people, particularly French, Germans, and Americans, cannot understand it.