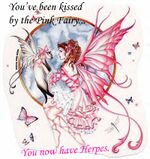 This atypical fairy is barefoot. In fact, most fairies wear boots.

~ The kid next door

Fairies are small, flying humanoids hunted for their wish granting meat and hallucinogenic properties. While the fairy trade is legal, it is heavily restricted and penalties are severe. Despite their status on the endangered species list, fairies and fairy parts are easily obtained through the Black Market.

Fairy wings can be powdered and used as a powerful aphrodisiac by the Dutch. Fairy juice is sometimes served hot at holidays, and may also be used as a sexual lubricant, as it is almost as slippery as Harpy Ooze and much easier to acquire. The flavour of fairy flesh is largely dependent on the breed, age, and sex of the fairy and how it is prepared. Dragons are known to be fond of the taste of barbecued fairy wings.

Most common is the Green Fairy, followed closely by the Red Fairy and Blue Fairy. Magical Paper Fairies are very rare. Fairies are magical, however they are less magical than Mickey Mouse.

Fairies are extremely long lived in the wild, some even reaching ages close to Dick Clark and Cher! Their age may be determined by counting the rings inside them after cutting them in half.

Sprites (a clever, wingless, tangy fairy) are used to make the beverage Sprite.

The many uses for fairies[edit]

Like Greek gods, there are different types of fairies depending on their use. Most fairies are used for completing phenomena and tasks of nature. However, some fairies may forsake the wilderness for careers at carriage manufacturing plants transforming pumpkins and mice on assembly lines. The gaming hero Link is known to huff fairies.

Using a process of partial distillation, it is possible to reduce Fairy Liquid washing-up, um, liquid down to concentrated fairy powder. Fairy powder has many uses in Traditional Chinese Medicine; for example as a powerful hallucinogenic. This practice was wide-spread in rural parts until as late as the 1972s, under growing pressure from wildlife conversationalists and entomologists to combat their declining populations from DDT spraying. Fairies have a notoriously difficult time mating in captivity requiring prompting by scientists with porn, they are particularly fickle eaters consuming only fresh Eucalyptus leaves and bamboo shoots, and will die if exposed to cold iron.

Live fairies were involved in the creation of Al Gore.