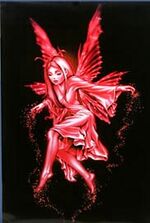 ~ the kid next door

Red Fairies are native to Mexico, although colonies have been reported in other places such as Canadia, Pennsyltucky and Texas. Ranging from about a half inch to three inches in size, Red Fairies are the smallest of the common Fairy. Red Fairy season is fairly short, typically beginning in late June and continuing only until late August.

Red Fairies are less sexually voracious than Green Fairies, however they are still very plentiful in the wild. Red Fairies are also the only breed of fairy that will successfuly mate in captivity, provided copius amounts of wine and Barry White music is available.

Red Fairies congregate in their fairy rings on May Day, Labor Day, and Fairy Socialist Laborer's Pixie Dust Day, and they like dancing with hammers and sickles. While Stalin is said to have had Red Fairies as pets, Krushchev denied the allegations in 1961. Nonetheless, Red Fairies say they aren't Communists, despite all evidence to the contrary.

Red Fairies are perhaps the most versitle of the fairies, having several important roles both within the world of cuisine and outside it. Primarily, Red Fairies have a striking taste. In contrast to the mild flavor of Green Fairies, Red Fairies have a spicy, zesty flavor not entirely unlike a jalapeno or habanero pepper. Red Fairies can liven up just about any dish, and are a staple of South American food. Red Fairies can be enjoyed raw, or to enhance their natural zest, by roasting with an oven or Solar Death Ray.

Additionally, Red Fairies are mildly hallucinogenic. Though determined by some "doctors" to have a legitimate use as an effective source of pain relief from Glaucoma, ground Red Fairies (misleadingly known as "pixie dust" or simply "dust") have replaced Ecstasy as the club drug of choice for many a young raver. 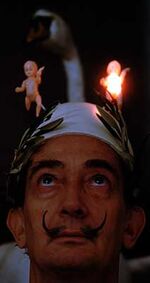 Club-goer whacked out on "dust". Note the appearance of flying babies.

In 1988 the harvest of Red Fairies was banned entirely by Mexico due to fears of over-harvesting; this decision was later overturned after Arnold Schwarzenegger single-handedly invaded the nation and executed its "girlie men" (his words). When asked about it later, Arnold stated "It [was] the most difficult [decision] I've made in my entire life, except the one I made in 1978 when I decided to get a bikini wax."

An adult Red Fairy can be used as a substitute for pepper spray or mace, if need be. Simply grasp the Fairy firmly with one hand, aim its rear end towards the face area of the attacker and give it a good squeeze with your other hand. The intense burning sensation that results will incapacitate even the strongest would-be attacker.

In recent years, deaths while harvesting Red Fairies have declined by more than 43%, after the introduction of spells.