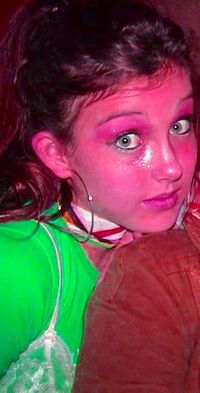 Symptoms of a worst-case use include excessive make-up, googley eyes, and an willingness to sleep with the unattractive.

“I highly recommend it.”

“I also highly recommend it. OMG your hair is so soft, bro! We should totally hang out a lot more! I love you man!”

“The science isn't in right now, call back in 5 decades.”

Ecstasy or MDMA (Mentally Dioxin Mental Amphetamine) is a smiley chemical substance found in students, hippies, and people who just want to dance around like idiots.

Although it is not as good as Soma, Ecstasy continues to be more popular as it is a whole lot better than weed for dancing, and smoking crack has actually been proven to be bad for your health. [citation needed]

MDMA use, particularly at all-night parties can cause death and sore cheeks, death, loss of hetrosexuality or worse unless the user consumes sufficient quantities of store bought vodka.

Other dangers include waking up naked in a church, rekindling relationships with people you don't really care about, confessing your undying love for someone you just met, stumbling upon the meaning of life and then forgetting it, and coming down like a bag of fat bricks.

Eventually, constant use of Ecstacy in conjunction with MariJUHunannah, may cause random acts of insanity and dimb-whittedness. However, the use of marijuana paired with ecstasy can lead to a greater sense of worthiness and knowledge, studies say.

It may lead you to: Expect TOO MUCH for free:

Think too highly of yourself:

"How about we have an arm wrestle?" - Roberto William Rogers.

"FUCK I need more pills. ME NEED PILL!" - Arsenic_X, McShifty and Roberto William Rogers have both said the same thing on more than 1 occasion.

But the dangers go far beyond McShifty and Roberto pulling those crazy antics. One such danger is extreme forgetfulness such as forgetting to not walk off the roof of a building thinking you can fly. OK, that's bullshit, it does not really make you think you can fly, they just told you that to get you to take it. Noob.