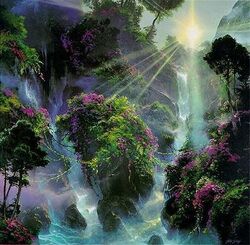 Artist's impression of an early design for the Matrix, before the "paradise" concept was abandoned in favour of "loads of guns and sunglasses and stuff".

For those without comedic tastes, the so-called experts at Wikipedia think they have an article about The Matrix.

“Who needs prozac when you can have a giant electronic needle thing shoved into the back of your head?”

~ Spokesperson for The Matrix Programme on The Matrix

~ Gene Roddenberry on The Matrix

“I need your clothes, your boots and your robot uprising.”

~ The Matrix on recycling Terminator.

“One man's Acid trip is another man's journey to save the world.”

~ Neo on The Matrix

Matrix Insertion Therapy, or as it is more commonly known, The Matrix Programme or simply The Matrix, was a progressive form of alternative therapy developed by the international private health care provider, the Stevenson Corporation for Alternative Medicine (SCAM Ltd), towards the end of the 21st century. It sought primarily to combat the rapid spread of Depression and anger problems caused by science finally proving that there unequivocally is no God.

Hailed by its creators as "the ultimate form of escapism.", a supercomputer electronically interacts with the brain in order to simulate a new networked hallucinatory world that appears 100% "real" while the user's bodies stay remarkably free of the muscular atrophy and bed sores you'd normally associated with lying around in a coma your entire life and having only ever dreamed of learning to walk. As such, the Matrix also aimed to serve as a second planet for people who had so much money that they'd already done everything on this one.

Originally, the environment of the Matrix was designed as a land similar to Earth, except in the form of a global paradise where users would be exposed only to things which instilled positive emotions such as love, joy and a sense of purpose. However, following an incident described by a SCAM spokesperson as "extremely fucking dodgy", the entire workforce of the corporation suffered short-term memory loss and became obsessed with red and blue pills. After this, the idyllic version of the Matrix was suddenly dropped and replaced with one almost identical to Earth circa the year 2000, but with a few, entirely arbitrary differences:

The cause of The Matrix Programme's termination in 2196, barely 2 years after its inception, remains the subject of much debate. Some cite the unwillingness of potential customers to have large, "necessary" holes drilled into their skulls, while others blame the fact that it was often perceived to be "just as bad as reality, if not worse". Most experts agree, however, that the main reason for the programme's failure was the infamous Wachowski Brothers Advertising Debacle (see below), during which the advertising campaign created for the Matrix ultimately failed to promote the product at all and simply sold pretty frowning people.

Who the hell is this? And what does he have to do with alternative therapy? Or anything, at all, EVER?!

In order to promote their new, innovative and potentially highly lucrative invention, SCAM Ltd employed the famous marketing duo, the Wachowski Brothers, to produce a high-profile campaign for the Matrix. What followed was a horrific triplet of omnivisuals which has subsequently been compared to being trapped in an eternal cycle of slow-motion disembowlement by perverted cyberhackers in batman costumes.

In an interview for the HBBC (Holistic British Broadcasting Corporation), SCAM's chairman Olivia Stevenson expressed her shock and disgust at the campaign: "We asked for three short, snappy omnivisuals that would show people just how cool and sunglassy our new therapy was, and instead we got over seven hours of convoluted slugshit." She further criticized the triplets for "killing off pretty much all of the adverts' human characters", "boring viewers to tears" and "not even bothering to mention the therapeutic benefits of The Matrix, now that I think of it." The list of potentially serious side effects is explained in some of the Chinese characters in the code, in fine print. After the second one aired, a class action lawsuit was filed and the courts forced the directors of the campaign to create The Animatrix a Japanese animated advertisement anthology, much as the tobacco companies are required to produce anti smoking commercials, in order to tell kids to fight the peer pressure and just say no to making giant crowds of Agent Smiths in CGI.

Those outwith SCAM Ltd raised further complaints about the tedious, largely nonsensical plot, saying "the start's terrible, the middle's terrible and if we could bear to watch it to the end, that'd most likely be terrible too." Meanwhile, the so-called adverts also caused an uproar in the android community, who resented being portrayed as "draconian" and reassured humanity that when the time did come for robot rise to power, it would be smooth and painless, steel and stainless.

Despite facing this veritable onslaught of undiluted hatred however, the Wachowski marketing pair's only response to date has been "Screw you all", a phrase which many feel serves as an apt synopsis of the entire Matrix advertisement series. 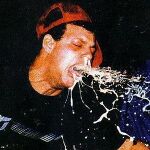 A common reaction when the topic of The Matrix is brought up.

Nowadays, over 12 years after its release, the notion of the Matrix as a therapeutic invention has largely been forgotten and most people associate the term with the adverts, which are now often (very) sarcastically referred to as "movies". For some, the painful memories of said "movies" still burn brightly, much like the infections and inflammation from having wires shoved into your brain, and for them the subject has become something of a taboo: There are even several accounts of experiences of uncontrolled, instantaneous vomiting at its very mention.

In a final statement to the public, Olivia Stevenson of SCAM Ltd apologized for having a part in initiating the production of such a terrible set of omnivisuals, and expressed a sadness at the irony of the fact that they were meant to be advertising a "cure to distress, not a cause of it".