Cyber Sodomy is an act that derives itself from the concept of cyber sex, however, the level of interaction is greatly different, since, when webcams are commonly used, one participant acts as a receiver and the other as the giver.

Thus, when engaging in Cyber Sodomy, the giver is tasked with instructing the receiver as to what actions to take, by assuming that they are actually with the other participant. 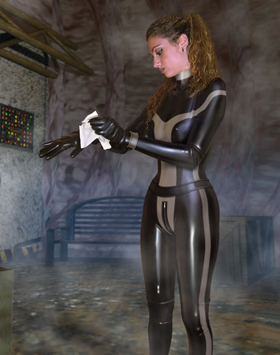 Lara's evil sister cleans herself off after some Cyber Sodomy. Whimpering shell of man not pictured.

The conversation itself is generally informal, however, a light session of fisting usually comes first as dodz explains from experience, although many are unable to physically force their hand into their anus without breaking their arm a feat achieved by Moshman117 on three separate occasions, they got help from Emma because she's kinky and thus common alternatives, such as a chair leg, computer speaker, computer mouse, scissors, television remote, stapler, or whatever happens to be lying around are utilized as acceptable alternatives. This then progresses onward, with the giver issuing a greater number of adjectives and verbs in the course of the conversation, in order to portray the experience as realistically as possible.

There are a number of variations of the act of cyber sodomy, some of the more popular taking on a Dogging-related theme, as a number of people gather in a public space, whilst being dictated to as to what actions to perform on themselves and each other (occasionally at the same time) via a mobile phone, although a number of complications have been known to occur after Freddy Mercury participated in such an event, and resulted in becoming incommunicado after the phone was irretrievably lost in the ass of another member of the group as a result of a somewhat overly creative idea.

Some however, prefer to take part in this group variation in the privacy of their own home or office, usually after a business lunch or boardroom meeting - Japanese businessmen find this a preferential form of respite after such a meeting, and many recommend engaging in Group Cyber Sodomy via webcam, whilst broadcasting to a paid 'Sodo-Master' who barks instructions at various intervals.

Occasionally, these encounters may yield an episode of coprobursting.

Much of society appears to have reacted to the new sexual deviation positively, as it was recently disclosed that many of the attendants of the G8 summit partook in a light bout of Cyber Sodomy; broadcasting the event to Colin Powell. Publicly however, many have claimed to shun this deviant behaviour, although in truth, many of those are believed to merely be repressed and simply not comfortable with releasing their true desires.

“I used to do this, in privacy with a tender young lad with whom I knew and trusted, and I got thrown in the slammer”