For those without comedic tastes, the so-called experts at Wikipedia have an article very remotely related to right.

“Alpha, get me 5 teenagers with attitude, a cannoli, and the latest issue of Hustler! This is an urgent situation!”

~ Zordon on the Power Rangers

Power Rangers (aka Mighty Morphin' Wild Zeo Power Rangers Turbo Overdrive Force in Space II: Electric Boogaloo The Sequel the Series) was an award winning 16-season television series. The series follows the titulating adventures of a group of teenagers (none of whom are emo) as they cope with homework, bullies and rape; while they are called upon to do what the American military can't do: Deal with illegal aliens. 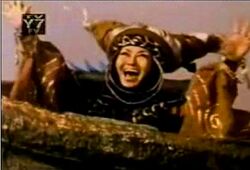 In 1992, NASA decided to demothball an Apollo spacecraft to purely de-mythify the Moon Landing Hoax. Upon arriving on the Moon, Apollo 23 discovered that the moon had an Earth-like sky and contained a disposed Pizza Hut dumpster. Although going completely against Houston's orders, they opened the dumpster to reveal Rita Repulsa and her fellow Pizza Hut employees. The fate of the astronauts and the revived Apollo is unknown due to a lack of mentioning of the United States government and its actions against Rita during the whole series.

The Pizza Hut manager who originally canned Rita, Zordon, now stuck in a transdimensional tube without a body, asks his robotic assistant, Alpha, to gather 5 teenagers with attitude, a cannoli, and an issue of Hustler. Alpha gets the teenagers, the cannoli, but doesn't have legal age ID to get the magazine.

With their new-found powers, the teenagers, the Power Rangers, battle Rita's monsters while keeping their identity secret and humiliating their local bullies through means that distract parents from the violence in the episodes. 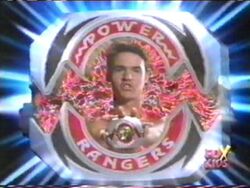 Jason, known as José Canseco to his military buddies, was the initial leader of the Power Rangers group. Assigned as the Red Ranger due to his impressive Tomato Sauce au Naturél recipe by Zordon, he also received the leading Zord, the Tyrannosaurus-X. Throughout his journeys in Power Rangers, he assisted in defeating numerous enemies and preventing Rita's attempts at destroying the Pizza Hut franchise, mainly the one owned by his Italian parents.

On various occasions, Jason would have to homesit Alpha while Zordon was out of his tube coordinating Pizza Hut deliveries from his local call center in a secret room in the Command Center. Jason considered this chore to be tedious due to Alpha running on a Windows 3.1 system.

Jason was replaced as leader by Tommy Oliver after losing a bet at the Angel Grove Race Track, moving to number two spot, gladly giving up his job as the Command Center babysitter.

Famous Line: "José Canseco don't get fucked by no crab!" 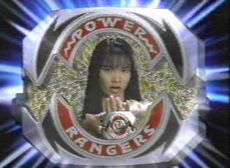 Grow your monster, Rita. I dare you.

"Trinity, fearful and slow. Why did I choose you?!"

Trinity, known as the Matrix Gal, was the martial arts guru of the Power Rangers group, teaching the others the art of Sannse, albeit unsuccessfully. She was assigned as the Yellow Ranger by Zordon because he's "racist, so shoot me. Oh wait, you can't!". With her martial arts and gravity-defying skills, she was a great asset to the team, especially when she was given a gun in season two (despite parental concern, ignored by FOX), replacing her plastic Chinese $2.99 Egg Roll Daggers. With her catch-phrase "Me love you long time!" she won the hearts of viewers.

Trinity was replaced by Aisha Campbell after she received a contract for a major movie trilogy that was released some years after her replacement. 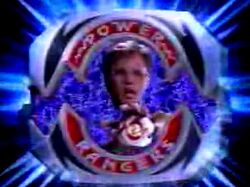 "Aim right above the fuel cells!"

Billy Cranberry was the nerd of the Power Rangers group, always solving all the technical problems encountered by the Power Rangers, namely Alpha's constant Blue Screen of Death problem. He was continuously poked fun of by other members of the Rangers group until he got laid by Bulk and Skull while drunk.

Billy Cranberry was one of the longest lasting original Rangers, due to his expertise in hacking into Rita Repulsa's server, allowing the Rangers to defeat her monsters the same way every week. He had to leave the Rangers when he suffered from uromisotisis poisoning when he realized Zordon didn't install toilets in his new command center.

Famous Line: "I think I landed on my dick." 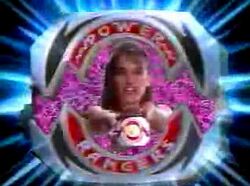 Kimberly Heart, the heart-throb of pre-adolescent boys, was the blonde of the Power Rangers group. In times where Billy Cranberry will be going on with his technobabble, Kimberly will always interrupt with a "huh," "what?" or "Durr." Her strengths come in her flexibility (not counting her "times" with Jason) and advanced bow weaponry in battle. She was considered the redshirt of the group, just without all the death. She had a relationship with Tommy Oliver to attempt to surpass Trinity in group seniority, but failed when, as stated by Tommy, "She bit too hard".

Kimberly was replaced by the hotter Katherine Hillard, as pre-adolescent boys were entering puberty and needed to learn what a boob was.

Zordon is some sort of fucking wizard. The guy was awesome until some mutha fucka came out of fucking space and stole him. Then The Power rangers went to space... it was pretty fucking stupid. However Zordon created the power and distributed it based on race. The typical asian was Yellow, the negro was Black, The Techie was Blue, The Girl was Pink and the leader, who was native american, was red. "No one will ever notice", my ass... 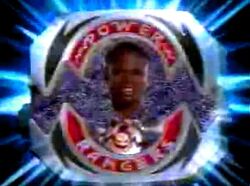 Black to the Future!

Zachary Tailor was the Token Black Guy of the Power Rangers group. In a time of increased focus on races in television, Zachary was chosen by Zordon to prevent lawsuits from local racism groups. Prior to Trinity receiving the main gun of the group, Zachary was the one who manned the missile and laser station on the Zords. When the going went tough, Zack would often exclaim something like "DAMN!" or "That's right, bitch" to confuse the enemy, then defeat them with a slice of his gun power axe. According to Power Ranger fan groups, Zack was considered the sexiest Power Ranger next to that other sexy guy.

Due to the fact that Zack was Black, and was the Black Ranger, racism jokes was on the top of the list of things to avoid by the Power Rangers, right after Zordon's bedtube.

Famous Line: I be lovin' me some grits!" 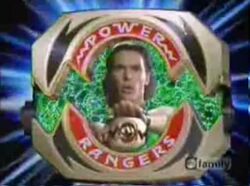 "Tommy, you cannot enter the Command Center without a Power Coin. Please insert one Credit."

Tommy 'Twist' Oliver was the ratings-booster of the Power Rangers group, introduced in an over-elaborate 5-part story to introduce his character. After he was freed from the tyranny of Rita Repulsa, he joined the Power Rangers as the Green Ranger, bent on ridding the world of global warming and saving the rainforests. Anytime the Rangers would threaten to destroy plant life with their Zords during a battle, he would call upon his Dragonzord to negotiate between Rita and the Rangers. This typically ended in failure and the Dragonzord returning to its ocean base with some major league dents.

Tommy Oliver was the longest lasting Ranger, and the oldest (which raised the television ratings of older women), lasting through many seasons. Despite all his appearances, he never retrieved the Dragon Dagger back from Jason, leaving the Dragonzord in the ocean to rust and to never see its lover, Titanus, again.

Tommy was also a master flute-dagger player,one of only four people worldwide to perfect Stairway To Heaven on said instrument.

He was also the only ranger prone to losing his powers (although under certain circumstances, it wasn't his "fault"); except for Zeo, which is still a mystery unto itself. 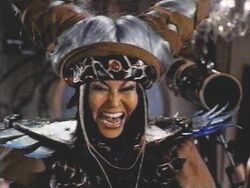 "I got a headache! Somebody give me some acetaminophen, codeine or something!"

Rita Repulsa was the main villain of the Power Rangers. Originally a Pizza Hut delivery driver, after failing to make 10 deliveries in a row, and threatening to bomb the Hut, her manager, Zordon, threw her into the dumpster and launched it into space, at the expense of the company. When she was released from her dumpster in the late 20th century, she focused her attention on destroying Pizza Hut, then to take over Earth. Along with her minions, she launched numerous attacks of the exact same magnitude in the exact same area every time against the Rangers when they were fully awake and ready for battle. Rolling Stones Magazine rated her tactics as "Predictable as a Star Trek rerun."

When her new superior, Lord Zedd, found out about her failures, he married her purely for the profits of selling her primetime Moon land area. After selling the land, he put her in another dumpster and threw her out into space. She sued Zedd later for legal shortcomings from the marriage. 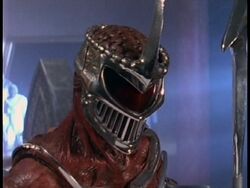 When Lord Zedd used his 'Zedd Vision' to view 'certain' things, parents complained. The imagery was replaced with him looking for his next meal.

Lord Zedd was the offspring of Lady Why and Lord.Exe and was the direct superior in the Department of Evil and Fun of Rita Repulsa. When Rita was unable to defeat Pizza Hut and the Power Rangers with her predictable tactics, Lord Zedd arrived and took up shop, selling her land as well and making a new base.

His main ideal was just purely to defeat the Power Rangers, then turn Earth into one large Evil Empire sex slave corporation. His plan was thwarted when Rita returned to reclaim her territory with her lawyers. Instead of counter-countersuing, Zedd joined forces with Rita to destroy the Rangers once and for all. Before they could perform the final blow, the Machine Empire destroyed their base and sent them running to Alpha Gamma V to set up their own family cafe.

Famous Line: "IT'S LORD ZEDD! NOW PREPARE TO DIE BE SENT TO ANOTHER DIMENSION!" 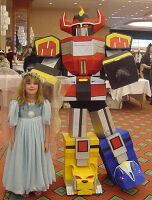 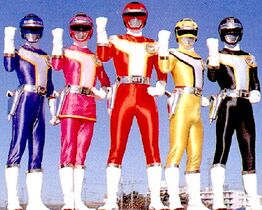 The Power Rangers. Note that the only one with a dick is the female one(yellow).

The following happen in any order -

After the enemy dies -

The Power Rangers' Theme Song is the single most important piece of music ever. The very essence of all existence is captured in this short but very precise song. Having the almighty Slash play this reaffirms the power of this song. To deny this power is to deny God himself.

Irregularities Between the American and Japanese Rangers

Little do people know is that Power Rangers is based off a Japanese show and uses sentai and robot scenes from it. Unfortunately, with all remakes, the Americans mess up with something...

With special cameo appearances by:

In May 2010, Haim Saban (the original creator of the show) had bought back the rights to Power Rangers (whoot!), and thus brought the show back to life in the form of Power Rangers: Samurai, which started airing on Nickelodeon (why?!) in February 2011. Despite the fact that the show should have been using the current Super Sentai footage, it's great to know that Bulk came back to the show after a 9-year absense.