Due to technical reasons, the article is named thus, the correct name would be WINDOW~3.1 (too long file name error) 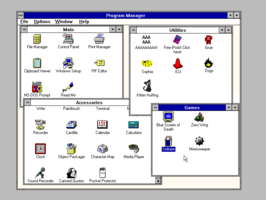 Windows 3.1 is the operating system of choice for Uncyclopedia's server administrators due the variety of software available and the low system footprint

“Still better than Windows ME.”
~ Oscar Wilde on Windows 3.1

~ Darth Vader on having a computer with Windows 3.1 installed.

~ Bill Gates on getting mad with Windows 3.1

“Pssst...wanna buy a counterfeit windows copy. Here are the 11 disks you need and 2 extra disks for printer support. And here's is some drivers for your motherboard and graphics card. If you wanna keep you computer safe from bugs keep it inside and cover it. That will be $4.”

For those without comedic tastes, the "questionable parody" of this website called Wikipedia think they have an article very remotely related to Windows 3.1.

Windows 3.1™, also known as WINDOW~3.1. was an attempt by quadruple-glass window manufacturers to get consumers to buy more Windows by brainwashing them. They claimed that when new holographic imaging systems came onto the market, only their kind of windows would be compatible. This, however, was untrue, as holographic imaging systems are the sole property of Starfleet and would not be coming into the market until the year 2095. The end result was a powerful, but lightweight operating system that at its peak achieved a 90% market share. 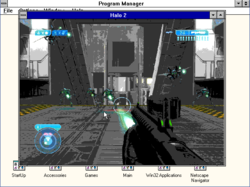 Windows 3.1 is a popular platform for gaming with support for a variety of graphics accelerators and chipsets 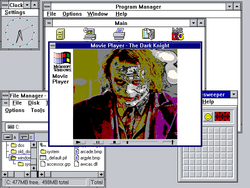 Windows 3.1 is notable for its low system requirements. It is capable on running on anything from a 16-bit 8086 to a 64-bit quad-core system.

Additionally, Windows 3.1 was shipped with that new-fangled creation called "Fonts 2.0". Not only did this break Microsoft's reliance on Adobe for fonts, after the 3.11 upgrade those fonts became legible, ushering in a new era in desktop publishing.

In order to capture the Central and Eastern European markets, Microsoft went so far as to issue yet another version of Windows 3.1 called Windows 3.1 for Central and Eastern Europe. As you might have guessed, this operating system came with all red fonts, to please the ultra-nationalistic-red commie palate. While this offering allowed Microsoft to initially dominate the communist market, they would later lose much of it to Linux, an operating system designed by, for, and around communists.

Due to the popularity of other operating systems, such as Windows Vista and Mac OS X, malware developers no longer target Windows 3.1, making the operating system almost immune to most viruses, spyware, and rootkits although Microsoft has cooperated with the government to add a piece of spy code in their os. In addition, the TCP/IP stack is not integrated into the system kernel, reducing the number of security holes in the system. Windows 3.1 is one of few Microsoft operating systems that is not bundled with Internet Explorer, further reducing vulnerabilities significantly.

The first beta versions of Windows 3.1 were equipped with all the drivers necessary to fully support 128 GB cable connections, 1024 TB-sized drives, undecipherable encryption algorithms, wireless networking with satellite capabilities, and a full set of professional-level software. They also included quantum copyright tags to prevent illegal copying of the diskettes. This caused any computer present at the time run too slowly, so the features were dropped in the final release. It's widely suspected that computers running the original beta are used as central hubs in the Internet.

Microsoft later released Windows 3.2, which is based on Windows 3.1 for Central and Eastern Europe and was targeted to the Chinese market in order to compete against Linux. This version included Chinese language support, Freecell, extra security updates, and several versions of Mahjong.

The upgrade from Windows 1.0[edit]

Nothing much different. Bill Gates hired some children instead of monkeys. And the Blue Screen of Death was brought to a whole new level with some words on it such as "too bad" and "your computer is out of RAM and therefore Minesweeper is unavailable." Also, this version introduced the highly debated wmiprvse.exe application, which constantly runs in the background greatly "enhancing" the user experience.

Although Bill Gates was a genius with numbers, Windows version 2.0 went unnoticed, and 3.0 had some critical flaws and only existed in beta, so the new operating system was named Windows "3.1", not only to make the naming process much more confusing but to make Microsoft's reputation turn into the wackiest company in America, a reputation which it still holds proudly today.

This section was written by Strong Bad, and may be of questionable accuracy.

You will also need a large hard drive because Windows needs storage space to install all the programs that you will never use. The best part of this experience is that these applications can't be uninstalled. Also Windows will make extra copies of it self and other programs to keep them safe, in particular it will overwrite other useless files such a pictures of your grandmother or your term paper. Windows just keeps sucking free hard drive space the more you use the operating system that you will eventually need to be a new hard drive in just a few months. If that isn't enough, installing required weekly security updates will eat up the remainder of free space.

The first thing that's gonna happen is a buncha text is gonna appear on your screen saying things like "Non-system disk or disk error." I'd suggest going out to lunch or doing something else fun away from your computer at this point. If the same text is still there when you return as when you left, you could have problems.

The next thing you're going to need to do is to buy a mouse. Just go to your local pet store and pick one out. I'd suggest reading the Murphy's Laws of DOS chapter on "The Care and Feeding of your Mouse." Mouses (they aren't called mice, they're called mouses in the PC world, moron) are like your best friend. You can pretty much throw your keyboard away at this point because you won't need it anymore once you get your new quadruple-glass Windows running in order to play Minesweeper.

They take like 50 frekkin' megs of RAM (wow isn't that an incredibly huge amount?) but those quadruple glass windows with the little Xs on them are like the most windows in Starfleet, man.

This version of Windows appears after the user had updated Windows 159 times. The source code had been reproduced at below:

Windows 3.1 saw significant market penetration in many sectors, including home office, retail, and banking. It is also credited with popularizing gaming with titles such as Blue Screen of Death, Solitaire, and Minesweeper. Even today, Windows 3.1 still sees significant usage in embedded systems. Qantas, for example, uses Windows 3.1 in its in-flight critical control systems. [1] Compared to other newer operating systems, Windows 3.1 takes up significantly less disk space, and has lower system requirements, making it run significantly faster.