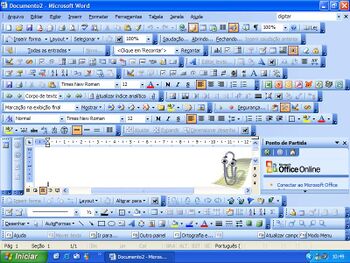 Microsoft Word utilizes a simple and intuitive interface, similar to a modern airplane cockpit. If you touch the wrong button...you're dead.

“MS Word is the bird in Soviet Russia!”

MS Word is the premier business solution in word processing invented by the genius Brendan Fraser. Initially developed by Microsoft in 1987 and hailed as mediocre, Word went through a staggering evolutionary process and become a full featured but uneasy to use application suite in just two years. By 1989, MS Word was unquestionably the finest word processing application ever to be developed, a title which it still holds today. A major drawback is, though, that it does not run under the most sophisticated operating system of the new millenium, Microsoft Windows.

Another problem of the aforementioned fact is that scientists still are not done yet cataloging and discovering the multitude of possibilities that MS Word offers. According to inside sources, MS Word originally was not created for humans, but ordered and specified by a highly developed alien race living on the backside of Uranus. This explains the high number of features that MS Word had since its initial beta release. However, no human was able to use a product with that level of complexity, which accounts for the manuals some two decades later still being full of errors and user-friendliness or intuitiveness not being the strong side of MS Word. It also is the reason for the highly sophisticated user interface, which tends to paralyze new users for 20 years. 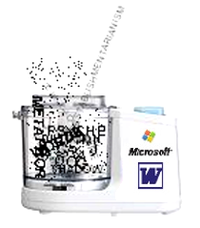 The Microsoft Word Processor is leading in data security through obscurity.

Since its inception, MS Word was designed to utilize open standards and file formats. By so doing, Microsoft was able to create an application easily integrated within heterogeneous computing environments, which is the main vision of that software company. The open standards set forth by Microsoft were adopted by a number of other companies leading to the development of Open Office and Star Office, which were designed to extend the functionality of MS Word to Linux and Unix platforms. The operating systems had only vi to that date bull crap.

While MS Word has always maintained a strong market share due to its stable mediocre quality and high cost, that alone is not sufficient to account for high sales of pirated versions. Microsoft has maintained an aggressive marketing strategy, constantly targeting those segments of the population that are least likely to be aware of the advantages of using Word. While most other companies would target the business world or young, hip, computer savvy individuals, Microsoft has sought sales in males looking for partners. Acknowledging that their software may have been too expensive for some target markets, Microsoft strives to keep prices as high as possible, claiming the loss in revenue is more worth than the gains to society. MS Word thus is seen as a pure luxury good like Single Malt Whiskey or Paris Hilton. It has been said that MS Word killed Wordstar in a back ally one cold winter night. This has never been proven.[1] . 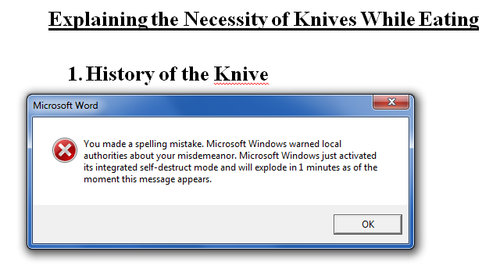 With the new 2008 version of Microsoft, the UN made an effort to civilize and educate the world's denizens by making spelling mistakes unlawful. Ever since 2008, it is a felony to write a mistake in MS Word in all UN-member states. If one does, Microsoft® Office will warn local authorities and it will activate the newly integrated 'Self-Destruct Mode™'. This will cause the PC to explode in 1 minute. Microsoft® Self-Destruct Mode™ is accountable for over 600,000,000 deaths per year, including innocent casualties who were killed by the blast. The death toll was at an all-time high in 2010, when it killed more than 800,000,000. Several relatives of Microsoft® Self-Destruct Mode™ victims have filed lawsuits against Microsoft®, but these endeavors have thus far been unsuccessful. In Europe, MS Self-Destruct Mode™ is, besides numerous deaths, responsible for the destruction of certain well-preserved medieval buildings. Pundits noted further that, approximately 50,000 professional writers annually lose their lives due to the new Microsoft Word. Bill Gates mentioned in a press conference: “Completely justified. At least we won’t be reading shitty books and teachers won’t have to worry about reading crappy high school essays after we developed the Microsoft Self-Destruct System. Or no, Self-Destruct Mode. As always, we, Microsoft, we did humanity a favor.” Also, he joked: “Every once in a while, I let my girlfriend use Microsoft Word. Since women are not as intelligent as men, I don’t have to tell her I want to leave her every time I want a new girlfriend."

Over the years, Microsoft Self-Destruct Mode has claimed over 4,600,000,000 lives. The most vulnerable victims are high school students, college students, office workers and professional writers. Also, most victims are females rather than males. 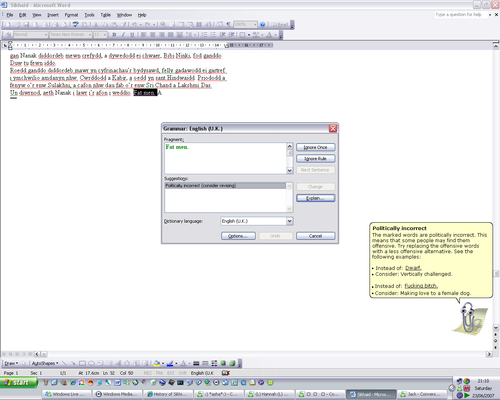 With this political correctness craze going around now...

Microsoft Clippy had been killed in a papercut accident due to the extreme change in moisture in the weather which was caused by Global Warming. This caused Clippy to go rusty, therefore, this fragility made Clippy easy to be cut by any sharp edges or sides of objects. However, whenever a user opens Microsoft Word 2003 CE (crap edition), Clippy respawns into his next life. SO NEVER OPEN MICROSOFT WORD 2003!

Happily on January 30th, 2007, Clippy met his last death when Bill Gates announced to Microsoft, "We are launching Office 2007, I want it to be clean, professional and hard for people to use. So get that retarded jerk out of my way." Clippy was then officially executed by Bill Gates. He is never to be seen again in future products. 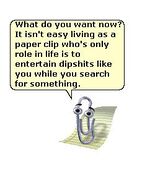 In recent versions of MS Word, Clippit has been known to become irritable to many users, which led to him being executed. 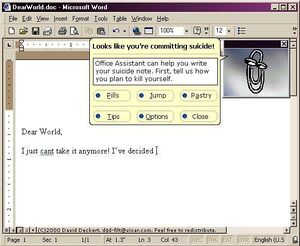 Clippy is always there to help.

A true miracle of modern artificial intelligence, the multiple wizard personality of modern MS Word are highly adaptable to the user's needs, reading every single wish from the operator's very mind.

Another area that is outstanding is the level of security that can be achieved by using MS Word. Pure steganography is simple not safe enough any more, with organisations like NSA and CIA sniffing both private and commercial data. Thus, Microsoft incorporated a new encryption technology that operates on effectively mixing the data payload with other random bytes in a way that a document usually is decipherable only with the exact installation of MS Word that created it. Note that this also means that your documents will not even be cracked and read by anyone in the distant future, as they will not have the means to run the MS Word installation which encrypted them as, at the current rate, all used builds of windows will be unbootable within five seconds of their connection to the internet within one year. Moreover, users can raise the level of security significantly by adding images and footnotes to the document.

Versions of MS Word include: