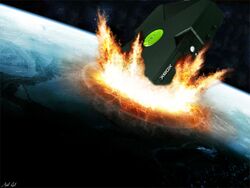 The Xbox, retroactively known as the Xbox Original or Xbox Hueg, is Microsoft's first attempt at a video game console. While being the most powerful of the four consoles released in the sixth generation, it was also known as the console that took up the most space, most likely to overheat, had few notable games, and least likely to have any of that mentioned in the press due to Microsoft's $500,000,000 war chest for console supremacy.

At the time, the Xbox was also the most advanced console in terms of online play, known for harboring the most insane online gaming community of 12-year-old sqeakers, frat boys, and underwater basket-weavers ever unleashed on the world: Xbox Live. It is this online service that has garnered the Xbox so many fanboys and just as many haters. The Xbox was popular enough to spaw a successor in 2005, creatively titled the Xbox 360.

By 1998, console gaming had begun to take hold over PC gaming, and Microsoft took note of this. More people were starting to play video games, and Microsoft obviously needed to make more money. You know, because obviously Windows wasn't making them enough money already. So they foisted the WinCE "operating system" on Sega to get a few bad Windows titles onto the otherwise great Dreamcast, pull a little money in for themselves, and get a bit of education about consoles. But this still wasn't enough, no, they wanted their own gaming system.

For those without comedic tastes, the self-proclaimed experts at Wikipedia think they have an article about Xbox.

On November 15, 2001, an unidentified flying object was spotted crash-landing in the middle of the Nevada desert. The U.S. military's paranormal division enlisted the help of technological expert, Microsoft enterpreneur, and certified genius, Bill Gates, to help them investigate this strange glowing green alien artifact. Upon inspection, Bill Gates hypothesized it to be a large transport vessel designed with interstellar voyages in mind. All of the alien passengers had died from starvation, but strangely, the ship was full of food. Gates then accessed the ship's log, which revealed that they had become hopelessly addicted to the built-in entertainment facilities that were originally in place to keep passengers from going insane with boredom. After finally solving the mystery, the U.S. military took the alien bodies to play with and left; Gates, meanwhile, had the remains of the spacecraft shipped back to Microsoft, so he could miniaturise the entertainment technology. Realizing the cash-flows he could anticipate with this addictive piece of equipment, he then mass-produced it and sold it worldwide as the "Xbox".

Originally, the launch title for the Xbox was going to be a game called Malice, but it was switched to Halo: Combat Evolved, because even the most advent Halo haters would admit that they would rather play as some cyborg dude blasting aliens then as a little girl with a mallet. This decision was wise, as Halo was the only thing ('cept the $500,000,000 loss leader) that saved Microsoft from becoming the next Sega. As the Xbox accumulated more games, it became popular across the globe, except in Japan, because you know, obviously they won't play anything that isn't an RPG, dating sim, or anything Nintendo shoves down their throats. Eventually, Microsoft knocked Nintendo out of second place and competed with the PlayStation 2 in a battle of epic proportions, temporarily leaving Nintendo's GameCube behind in the dust.

Gates did, however, have the social conscience to limit the console's addictiveness, and created an attachment that would give users an epileptic fit if they played it continuously for any longer than eight hours. Alternative symptoms of being under the influence of Gates's consumer-protection system include: poor vision (see Blindness), always using Windows despite its flaws, spending more hours than you normally would on your computer or laptop (excluding Apple hardware), uncontrollable rage when gaming is interrupted by someone, frequently paying $50 for a game that will only entertain you for a few hours, and rationalizing the design flaws by saying "it's worth it".

Bill Gates had it contained in a box-shaped black hole to allow for transportation.

On the outside, the Xbox looks like a gaming console. But if you take a look inside, you'll notice that inside it's ironically the thing Microsoft DIDN'T want it to be, a PC. It had a motherboard, a CD-ROM drive, a hard drive, almost everything a normal PC had.

Because of this amazingly ironic mistake Microsoft made, Linux fans hacked the Xbox and put their favorite shitty operating system on it, with no mod chips needed. Out of all the gaming consoles of that generation, the Xbox was probably the easiest to hack because of its ironic design.

Before the Xbox Live service got a huge facelift with the 360, it had the same crazy community as it does now, only a bit smaller. Instead of playing Modern Warfare 2, they could be found playing Halo 2, Call of Duty: Finest Hour, and a ton of sports games. The creation of the Xbox Live community finally gave 12-year-olds with arsonist tendencies and severe anger issues somewhere to voice their frustration.