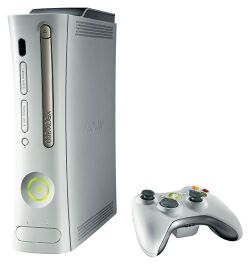 For the megalomaniac software entrepreneurs among us, the Scientists at Wikipedia have an article about the Xbox 360.

Xbox 360 is Microsoft's second attempt at a gaming console. The term "360" used in its title is suggestive that its development, based on improving the design of its predecessor, the Xbox, went around in a circle and changed nothing at all. A prominent feature of the Xbox 360 is its integrated Xbox Live service that allows squeaky kids to abuse players online and download content such as arcade games, game demos, viruses, trailers, TV shows, pornography and movies.

The Xbox 360 was officially unveiled on MTV on May 12, 2005, with detailed launch and game information divulged later that month at the Electronic Entertainment Expo (E3), receiving lukewarm response and a compulsory 5-second applause from the audience. Surprisingly to many game analysts and developers, the console sold out completely upon release in all regions except in Japan, and as of 2013, over 78,2 million units have been sold worldwide. The Xbox 360 is currently available in two configurations—the "Arkade" and the "E-l33t"—and each has its own selection of useless but highly customisable accessories.

The powerful Xbox 360 is capable of millions of calculations, including the ability to count to four for example.

Known during development as Xenubox, Xbox 2, Xbox FS (Fat Station), Xbox Episode 2: Microsoft Strikes Back, Xbox Next, or NextBox, the Xbox 360 was conceived in early 2003. Gates originally conceived simply just selling the original Xbox again, but with a different cardboard box packaging to fool consumers into thinking they were buying something new. However, his market-research team warned him that if this genius idea was exposed, the consequences could be disastrous for Microsoft. Gates then pursued a new direction, and strived to create a console that would be able to justify its inclusion in the league of next-generation gaming by having one thing: Better Graphics.

During development, Gates got slightly carried away with himself and integrated even more new features than the aforementioned graphics improvement. He also did extensive market research by observing small focus groups of families and friends playing on the Xbox 360 together. Through this, he came up with the idea of using wireless controllers to solve the problem of gamers trying to strangle each other with the controller cables. 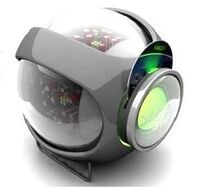 A scrapped design for the Xbox 360. 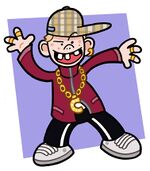 The Xbox 360 Arkade is the working-class level for the Xbox 360. It was initially priced at $279.99, until Bill Gates was informed that $279.99 was too expensive for any working class individual to afford, and he redyced the price to $199.99. It includes a wireless controller, composite AV cable, HDMI 1.2 output, an internal 512 MB memory chip, and 5 Xbox Live Arcade titles: Boom Boom Rocket, Feeding Frenzy, Luxor 2, Pac-Man Championship Edition, and Uno on a single disk. The Arkade version does not include a hard drive or any real Xbox 360 games in its bundle, as Gates assumes that poor people do not possess the sufficient currency or intelligence to play them.

The Xbox 360 Pro is the middle-class level for the Xbox 360. It retailed at $299.99 and has a reasonable 60 GB Hard Disk Drive. However, due to the the growing divide between working and upper-classes, Bill Gates is discontinuing this version of the Xbox 360.

The Xbox 360 E-l33t is the upper-class level for the Xbox 360, and is generally held to be the best and most desired version of the 360. It retailed at $479.99 and includes a 120 GB hard drive and a matte black finish in response to the comments of one upper-class test subject. Despite having very little different between the E-l33t and its less sophisticated brethren, this version of the Xbox 360 declares that the owner is of high status in society, making it highly sought after. There are few outside of the Forbes' 400 rich list that have the privilege to own such a piece of innovation in Engineering and Modern Art.

Since what feels like the dawn of time, Microsoft has been in a three-way console war with Sony and Nintendo. Bill Gates, in his campaign to monopolize and obliterate any other competition he deems to be a threat to Microsoft, has utilised many tactics and strategies to win the war and save his 360ian subjects. Many believe he will fail, as an increasingly large amount of users are being swayed to the dark side of the Gaming force, but others remain devout in their belief that he will smash the competition, just like he did with Apple and Lotus... 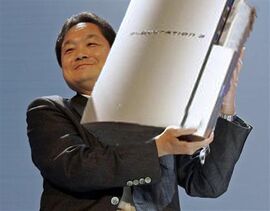 It still remains a mystery how Sony managed to pack so much processing power into the PS3.

In an attempt to copy the 360's wildly popular Red Ring of Death, Sony created a monster of science, defying the laws of relativity and imagination, as well as acquiring a mythical artifact known colloquially as theblu-ray drive. Born like Darth Vader, but without the melodramatic and oh-so laughable "NOOOOOOOO!", it was then knighted the PlayStation 3. Due to its ability to play Blu-ray discs, it is technically superior to the Xbox 360, as the discs contain 1.7x the amount of space a HD DVD does, allowing almost twice as much gaming detail.

However, the PS3 is holding itself back from global domination for several reasons. Developers are unkeen on actually bothering to do anything with the extra space available. Whilst attributable to laziness, this could also be due to the fact that the PS3 has very few games that are not shared multi-platform with the Xbox 360, and they are therefore limited to what the 360's specifications allow. Another similar point is that the Xbox 360 has more exclusive games than the PS3 does — 185 to be precise, far more than the PS3's measley two. 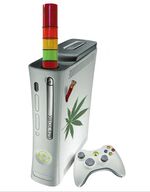 The Wii is also considered to be one of Xbox 360's most dangerous competitors. In a shameless sellout campaign to get people aged 3–12 years old playing videogames under the "casual gamer" moniker, Nintendo may not only be stealing gamers from the Xbox community, but also from the human community as a whole. Consequently, they may also be taking away revenue from games once considered just average games, now considered "Hardcore", and investing money in stupid, trivial, casual games which revolve around one basic concept, such as "Wii Bowling", "Wii Fishing", "Wii Sumo Wrestling" and "Wii McDonalds Worker". It appears the extinction of the average gamer is nigh.

Fortunately, the Nintendo Wii and its "shit" "casual" games are hampered by having Playstation 2 standard graphics and limited gameplay which usually grows tiresome after 2 hours. Hopefully, this will only be a fad born from adverts displaying people of all ethnicities, ages, cultures and backgrounds playing together joyfully in harmony. On the other hand, the Wii could win the Nobel Peace Prize, which would make us royally f***ed. 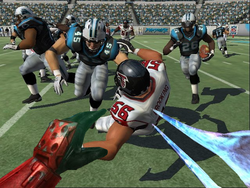 A typical Xbox 360 game. Originally a football simulator, this is one of the many games on which Microsoft made last-minute adjustments with Microsoft Word (and MS Paint for major texture editing) to market it as a FPS. 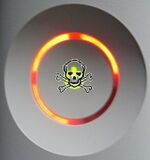 Red Ring of Death: One of the greatest stimulants of aggression known to man.

“With Xbox 360 we wanted to create something to calm gamers down in the very rare case that the console should break, and we all know that there is nothing more soothing than 3 soft-glowing red blinking lights.”

Despite having jet airliner cooling fans, the Xbox 360's powerful processer never fails to overheat. This results in the most original feature that Bill Gates has come up with in his suckcessor to the original Xbox, the Red Ring of Death. It indicates a "General Hardware Fuckup", and is recognized by three quadrants of the ring around the power button flashing red. Despite being solvable by simply waiting 12 months for the hardware to cool down (6 months if placed in a freezer), many owners find waiting any longer than 30 seconds with the RRoD blinking at them will cause them to enter into a fit of blinding rage, in which they will perform one of two options:

Some 360 owners try to find a silver lining by engaging in 1-on-1 contests of staring at the RRoD, with the winner being the person who manages to stay calm the longest. The loser is the one who has to call customer services to get it repaired. Some absolutely stupid 360 owners (see Casual gamers) also compete to see who can get a RRoD fastest, by covering the fans, placing it next to the fireplace, forgetting to turn it off, or with the even quicker method of playing a game on it. 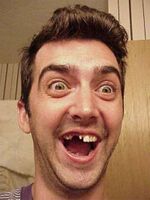 A test subject after playing Xbox continuously for over 38 hours.

Similar to how food addiction in the 20th century has led to the introduction of fat camps, game addiction camps have been introduced to help those who cannot keep under the 16 hours a day that Microsoft recommends as a maximum. Some of the practices used to help camp inductees are quite controversial, however. There have been reports of shock therapy, in which an individual is subjected to an electric shock when an image of Super Mario is displayed, intending to reinforce a subconscious aversion to the character. Addicts are also forced to exercise in the yard for hours on end, while a camp counsellor shouts through a megaphone, "Video games characters are not your friends. No matter how hard you try, you will never reach that last level. You will never top that high score."

The act of modding an Xbox for purposes at odds with Microsoft's terms and conditions is an act punishable by death in most countries, even ones that do not normally allow the death penalty. The following disclaimer is presented every time a console is powered on: