Segata Sanshiro, founder of SEGA. Think you can stage an unwelcome takeover of this man's company? I mean come on he's got freakin' flames.

“I have a Dreamcast!”

The Sega Corporation (株式会社セガ Kabushiki gaisha Sega) was part of Segata Sanshiro's master plan for the enslavement of children and adolescents. He hated how chikidsdren would spend their time outside playing sports or games (interbreeding as a result of this) instead of locked away in a dark room playing video games. He decided to start a company that would promote video gaming, while he would punish those who squandered their time frolicking in the sun and fresh air (by sterilizing them).

The management of Sega is something to be marveled at. It was based upon the premise that there is an inherent need to proliferate video gaming materials that were not made by the big red devil himself. Sega took the idea that it was their duty to do what the opposite of the devil would. While manufacturing arcade units and having some success in Japan, they attempted to penetrate the American market like a classic mighty dump truck with the Sega Master System. The Master System was designed to compete with the devil's dusty flashing gaming box and it failed miserably.

However, Sega saw a flaw in the devil's ways. He was an ancient devil that hated upgrading, forcing the same old dusty corroding box on the masses who would never know better. Sega decided that they saw a bright, fresh, opportunity to forge a new beginning for the video game industry with them on top. Appropriately, they named the console the Mega Drive. Nonetheless, the US patent office attempted to thwart Sega yet again by saying that the name Mega Drive is already taken. So, randomly, they renamed the console the Genesis. 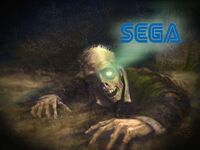 The ghost of Segata Sanshiro.

In 1991, Sonic the Hedgehog started his mission on Earth. Through the prophet Yuji Naka, he was able to take Sega and do as he wished. Sonic served as Sega's answer to Mario, the plumber who revolutionized the video game industry after Atari decided it wanted to oversaturate the market with subpar titles such as Eee Tee and Puck-Man. Sonic gained market share by falling through the crack in the back of Mario's pants and became a force to be reckoned with. Sonic was edgy, cocky, and represented everything that Mario was not.

For those without comedic tastes, the so-called experts at Wikipedia have an article about Sega.

The game's plot deals with Sonic attempting to teach people the ways of the Cult of Sonic, but he is foiled by the Teddy Roosevelt lookalike, Dr. Ivo "Eggman" Robotnik. Sonic became the most renowned of Sega's games, and begat sequels that became even more popular after issuing a mutant fox, Miles "Tails" Prower, and a dreadlocked echidna, Knuckles "Chuckles" the Echidna.

Nintendo saw this and employed Rare, a previously unknown British developer, to develop Donkey Kong Country and its less popular Game Boy port Donkey Kong County so that Sega would deplete its resources trying to compete. Sega plagued the Genesis with the Sega CD, Sega CDX, Sega 32X, Sega Power Base II, Sega Neptune, and any other add-on that they thought would help them. Then they released some subpar games (each one featuring a new co-star/furry sex symbol helping Sonic out), slapped Sonic on them, and called it good.

In short, Nintendo and its surrogate Sony decimated Sega. Today, Sonic remains existing as a shadow of himself, lurking at the glory days he once lived.

Sega manufactured the SG-1000, but did not release it in the US for "undisclosed reasons". It got remade into the Sega Master System, which bombed in the US, but thrashed the NES in Europe. Their arcade games were 20 years ahead of their time, though they made inferior ports that looked 20 years behind its time. Their so-called mascot was Alex Kidd, but unfortunately no one except people on the same street as the Sega HQ knew about him. After getting tired of releasing unsuccessful games, Sega decided to make a messed up version of the Sega System 16 known as the Sega Genesis, or the Sega Megadrive if you aren't American. Sega decided to ditch Alex Kidd and replace him with Sonic the Hedgehog.

Today, Sega no longer manufacture consoles; the majority of their post-2001 games are only known to have been played by...no one, actually (except for Yakuza).

Video Game Variety Magazine (available at your closest Sega retailer) states, "Sega has the largest range of a variety of games available for everyone. There is no repetitive titles compared to Nintendo's favor of Mario with a stammering 5 games. We find that the system is very popular with the characters of Pikachu and Donkey Kong which are sold separately on eBay with bids starting at $50 million, as gorillas aren't allowed as pets and the costs are to cover all legal costs and because Australia will not allow a new species of anything without going through quarantine. Sales have increased dramatically with the Playstation 3 being in favor and minus 50 billions purchases of any Sega product. We are on the lead of something new." 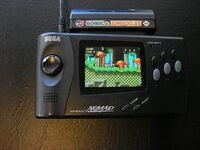 The Nomad, released in 1995, is on the same level of failure as the Virtual Boy or the game.com. Sega, in a last-ditch attempt to compete with the Pokemon playing machine, released the Nomad as a standalone portable console, taking significant liberties with the word "portable." Instead of playing downsized or "dumbed down" games like a traditional console, the Sega Nomad plays full-sized Genesis games. One literally sticks a Genesis game and plays it.

Internally, it is a model 2 Sega Genesis. Aesthetically, it is a deformed brick that is no more pleasing, and even heavier than their first effort, the Game Gear. In fact, it's basically a Game Gear with 6 extra buttons and Genesis hardware inside. Also, in an interesting design choice, the Nomad did not come with an internal battery compartment. Some speculate that this is due to the Nomad already being a bulking behemoth and that all that extra weight was unnecessary. Sega decided instead of using internal battery storage like every other portable ever, that they would release an external "battery pack" that will sear batteries alive in the matter of minutes.[1] Set at a retail price of $180, ($750 adjusted for inflation) the Sega Nomad was destined to failure, and as a result of the ludicrous idea of stuffing a Genesis in a huge brick, Sega lost more money.[2] Duracell was also furious over failure of their deal with Sega, which was dependent on the success of the Nomad.