Untendo (Japanese: 安天堂 Antendō)is a brand name for video game consoles marketed by the Uncyclomedia Foundation (Japan). These devices were made for people to access Uncyclopedia.

Other devices made by Untendo include the servers that run Uncyclopedia and its spinoffs. People dig Untendo since they get a kick out of word puns based on Nintendo.

As Uncyclopedia has been getting crowded on the Internet, many barriers of quicksand have been excavated for Uncyclomedia servers. Jimbo Wales has been held responsible for expanding the business profile of the Uncyclomedia Foundation; so he started a side project to market video game consoles to people who like quirky video games. Untendo was formed in 2015 when people who played too much Warioware Inc. started to pee themselves from all the minigames on that game.

Untendo policy initially focused its efforts into being recognized by all distribution companies as the "collectively secure" and "preferable" way to be entertained, but now spends much time fighting against the tyrannical lobbying of the much beloved M1cR0s0ft and their Windows ventilation system, which Untendo calls "anti-trust" and "not very nice", because nobody asked Untendo first.

The president of Untendo released a press-statement asking, "Why should people be forced to have windows in their homes?" After his press release, he shot a pistol several times into the air.

Untendo still tries to make league with the super-powers of the megalithic entertainment sector. 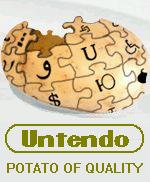 The greatest innovation with Untendo is that they manufacture devices that run off potatoes; this way, they can draw less power, but will be powerful enough to generate a high quantity of memory.

People who cook potatoes will increase their quality so they can serve as powerhouses for Untendo devices. Potato farms in Idaho have been stupendous at serving as Uncyclomedia power grids, along with Udaho.

Controversy in the media[edit]

In the early "Metal" phase of the 20th century, Untendo initiated experimental programmes for the cross breeding of primates and Italian men, leading to world-wide media attention. Indeed, models of their "Royal Ape" half-ape/half-Italian man sold out in every shop, worldwide, on the day of release.

Things were not all pretty pink-coated candy behind the scenes, however, as one man, an Italian plumber - a victim of these experiments - released his autobiography "Barrels and Ramps: My life of Hell" five years after the initial media frenzy. Indeed, the same man was later victim to cross breeding with a certain race of "Princess" creatures, leading to another autobiography "Towers and Giant Turtles: she ain't worth the trouble."

In the late "Friends" phase of the 20th century, the biggest scandal ever to hit Untendo reached the media. The president was called to defend against charges of brainwashing, on the grounds of Untendo directing all of their efforts towards reaching the market of "children." The prosecutions best case lay in the contemporaneous release, by Untendo, of small demon-like creatures (known as Pikas) that hypnotised small children to do their bidding. A result of this case was that the small demons must be stored in small red and white spheres, with warnings clearly printed. Once voluntarily released by any child, Untendo would not be held responsible for the consequences. To date, 72 children have been enslaved. A NATO mission is set to free them in July, 2010. They failed.

Displays useless knowledge and passes it off as fact. Other than that, it serves no major purpose to the world, except to cause people to huff kittens.