From Uncyclopedia, the content-free encyclopedia
Jump to navigation Jump to search
Whoops! Maybe you were looking for Main Page?

For those without comedic tastes, the so-called experts at Wikipedia have an article about Uncyclopedia.

The Uncyclomedia Foundation was founded in 2005 by Oscar Wilde to preserve the wisdom of man against the coming darkness, which he predicted using the science of psycho-Art History. His mission was a simple one: "Imagine a world in which every single person has free access to the sum of all human stupidity forced upon them. That is what we are doing."

After his death, control of the family business was turned over to Chronarion, as specified in Wilde's will. Due to his long tenure, many of Oscar Wilde's original writings can still be found in Uncyclopedia today.

After its humble beginnings in the family woodshed, the Foundation published The Journal of Uncyclopedian Studies for nearly two centuries on a quarterly basis until 2008. When Henry Kissinger was awarded the Nobel Peace Prize, Wilde declared his work was done and no human would want for irony again.

In 1998, Chronarion inherited the family fortune and pledged to revive the Wildean dream in the dark and McIrony-plagued days of the Dot-Com Revolution. He hired Lara "Stillwaters" Sanger as editor-in-chief for a professional team of twenty-two comedy writers to work through a seven-level review process to create the single funniest compendium of information on Earth, to be called Oldedia and given away on the Internet. After seven years and twenty-two million dollars in cocaine, they had almost 22 very, very funny words about Oprah, kitten huffing and assorted stoner humor. Certainly funny on enough cocaine.

Around this time, Stillwaters suggested making it a wiki instead, since the coke dust was starting to clog the servers. Inspired by the sound of professional humorists talking so fast their teeth started melting and dribbling down their chins, she came up with a name based on a single wheel spinning faster and faster, but wrote it down so fast that no-one could actually read her writing. And so Uncyclopedia was started in Chesterbrook, PA, in January 2005, hosted on some site to do with fortune-telling or something. 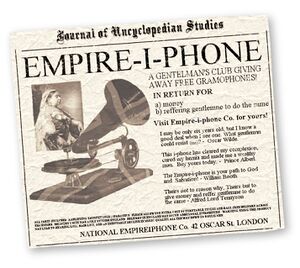 Empire-I-Phones, advertised in The Journal of Uncyclopedian Studies, no. 1, April 1860.

The wiki was launched to great acclaim, particularly a few months later when the British discovered it and proceeded to fill it with humour, rather than humor. At which point the Americans didn't understand it any more. But they could imitate the more obvious riffs and donate money to PBS to show more of it, so that was okay.

The wiki was briefly hosted by Wikia. After fighting off a hostile take-over bid by rival Wikipedia, Chronarion again sought a safe haven for their maverick publication. After much searching, he finally found the perfect place: Wikia. As his father and mentor often said, "If you can't them, join them."

The Ferrari Enzo he got out of the deal also helped greatly in alleviating the pain of loss of corporate control.

Stillwaters now has a lucrative niche on the lecture circuit where she details to crowds of economically threatened professional humor (and humour) writers how she invented the Uncyclopedia model, how she personally steered it through its early days, how it would not be what it is without her, how it provably sucks and is irreversibly doomed, and how she is working on a deal with a UFO-riding venture capitalist to produce a non-wiki collaborative humor site that will be much funnier. Oh yes. It will. 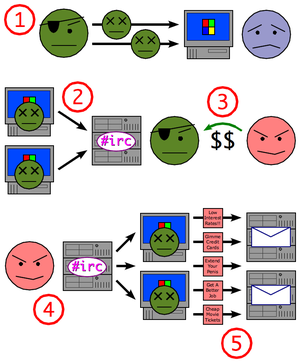 Uncyclomedia is powered by either a Stormtroopers vs. Red Shirts Device or a Cat-Toast Device. People harvest Untatoes to power the servers of Uncyclomedia since they are the most environmentally friendly batteries around. That way, no power outage can occur if the power lines are snapped by a timbered tree.

The Foundation board and internal mailing lists work according to time-honoured principles of international organisation, nonprofit management and volunteer motivation.

After the UFO-riding venture capitalist ran out of money to pay her, Stillwaters set to work on this spork of a spork of Uncyclopedia, in which the contents of Uncyclopedia are sifted by expert academic humorists* (think of your cat tray and that shovel that lets the litter through and traps the solids) and run through several more layers of review before being arrested by one of the "Constables."

Editors are known as "Citizens," where "citizen" is defined as "holding a four-year bachelor's degree or higher." Those not meeting this requirement are known as "UnPersons" and are assigned to duties in the engine room and sewers.

The discussion mailing list was shut down after people actually started discussing the project on it, as this was completely contrary to Stillwaters' original vision. It was replaced by the current web-based discussion forum, which requires Etch-A-Sketch 9.1 (or higher) to access.

* So far they've asked Tom Lehrer, who looked at them funny. It appears cocaine isn't that popular with academics.