~ Me on Game Boy Micro

The Game Boy Micro compared to a standard 1¢ Lincoln disk.

Following the immense success that followed the Game Boy Advance, Nintendo began production of the first, and much more successful remodel of the hand-held. The Game Boy Micro was released in Late September, 2005, and took the world by storm.

The innovative design of the Game Boy Micro gave much higher class owners a chance to have their own Game Boy, without having to look poor and settle for a lesser hand-held console (as well as many eye straining problems that came with looking at the screen).

The schematics of the Game Boy Micro show that the hand-held is only 10mm x 20mm x 2 mm (less than an inch squared). The sleek tiny design makes it much more aerodynamic for when you want to smash it into a wall (those pesky Mario games are the worst).

Like the others in the series of Game Boy Advances, the Micro's primary feature is the backward compatibility, allowing you to play cartridges featured on other popular Nintendo hand-helds (with the purchase of a special system that allows you to play the games that are roughly 50 times larger than the actual hand-held).

Another technologically advanced aspect of the Game Boy Micro is it size. It's ability to be held usurps the power of all other hand-held objects ever created. The micro was also created with actual funding ahead of time! Yes, ahead of time, thus creating the legacy for Nintendo to not release crap after each steaming pile of crap. Another beloved feature is how the Micro comes disassembled, and in order to play, you must put the entire thing together by yourself. 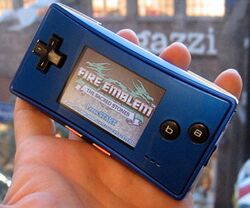 The baby holding this version of the Game Boy Micro has particularly small hands.

Overall, the Game Boy Micro has hundreds of features that were previously discontinued from the traditional Game Boys, a short list includes: decent graphics, more than one game, having a screen, and above all, it does not smell like wart remover (a fan favorite).

The Game Boy Micro featured a distinct list of some of the greatest Nintendo games every created. Among the many greats included the boundless Mario Micro, a tremendous game, way ahead of its time both physically, and psychologically. The game was released on the same day as the Micro, and did so well that Nintendo released a special edition Micro that came packed with the game. This lead to the idea of selling Wiis with a game inside the box. Then Bill gates of course send in a game calles Spyro:Season of Micro to take over the world.

Other greats included, but are not limited to Kirby Micro Star, Fire Emblem: Micro Mission, Donkey Kong's Micro Jungle, and Microball, the greatest virtual sport game ever created according to video game monthly.

However like every good system, the Micro had its fair share of bad games. One that stood out above all others was the infamous Mario Kart Micro. Clearly this game was created while the creator was drunk. The graphics were sub-par compared to others of its time, and the gameplay was just shitty (and, as all Mario Kart games go, it was the most frustrating game ever released on the Micro).

Just as fun as it is to purchase and play on the Game Boy Micro, it is to destroy it. Game Boy Micros feature an excellent array of ways to be destroyed, and is second only to the Nintendo GameCube on the fun scale based on destruction. Traditional destroyers believe that the best way to dismantle a Micro is to bash it a couple times against a wall, short and sweet. However some more unique destroyers prefer a much more surreal destruction to give them a good feeling inside (much like the first time you smoke pot).

Some of the advanced ideas were featured in the 2006 book of the year, Micro-Management, and included some favorites, such as the Flat Micro, where you place the Micro on a train-track, and wait for a train to come by and flatten it. Not as much fun as you would expect, and it is a very tedious task. However for those people with more time on their hands, another fun way is dip the Micro into a vat of dry ice, which immediately void's its warranty, then just as the icing on the cake is to do the traditional smashing against a wall. It is much more fun than just smashing it into a wall alone.