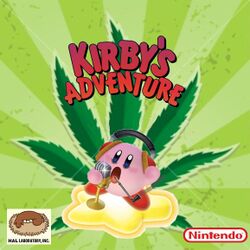 Kirby is a morbidly obese, pink fatty and an award-winning singer/songwriter/guitarist who also is a living void. He had an interesting and varied life, and was buried in his Madrid villa until his 2011 resurfacing. He has the strange ability to inhale things into his mouth. He once was the world champion of Kitten Huffing, but lost his title to Muhammad Ali in 1997. After he apparently died from a heart attack after eating New Jersey, he was found to be alive in late 2011, now an avid collector and hoarder who has collected items from eBay sellers such as Triple-D-Luxe Emporium, UltraSwordMeister, RobobotCop203, and JambaCult.

The Life and Times of Kirby[edit]

Contrary to popular belief, Kirby was not a Pokémon, he was however an early popularizer of rockabilly, an uptempo, backbeat-driven fusion of country music and rhythm and blues, and the king of rock and roll.

He shook things up by introducing rock and roll to Popstar at age 13, when he found a guitar lying on the side of the road (after having inhaled the person playing it). It almost seemed like Kirby had gained newfound powers the moment he touched the guitar. He soon went on to release his first album, "Dream Land" charting number one in America and went on to release several more albums, with catchy songs like Whispy Woods and Green Greens. Kirby owed much of his career to such alliterations, and his good looks didn't hurt either.

For the religious among us who choose to believe lies, the so-called experts at Wikipedia have an article about Kirby.

Kirby revolutionized guitar playing in in the 1950's and a musical chameleon successful in many genres, including pop, blues and gospel, he is one of the best-selling solo artists in the history of recorded music, with estimated record sales of around 600 million units worldwide.

Kirby was arrested twice, once in 1966, and a second time later in 1969, the first time was on allegations of being under the influence of crack-cocaine whilst wearing a top-hat and eating three police officers while refusing to co-operate with police forces, and the second time was playing a quote "really loud rock n' roll" song which killed everybody else in a four-mile radius. Also, to worsen the situation, Kirby had previously released several songs with names such as "Kracko" and "Capsule J." After the decline of his presence in the music industry he started to balloon. But in the year 1973, he surprised everybody with a comebak and pleased many people with his groundbreaking album, "The Crystal Shards." This refreshing and interesting new take on Kirby's style appeared to be his final outing before the breakdown. After his untimely apparent death in 77, fans worldwide expressed remorse in the loss, even to the point of denial with Kirby sightings as common as bigfoot and aliens.

Kirby was found to be alive and well in a condo in Las Vegas in late 2011 - and now hoards items he buys on eBay, ranging from giant swords, to glowing rainbow fruit, to robotic armor, to pink hearts that can destroy the evil in anyone, although he refuses to let the USA use the latter to negotiate international problems. He also has his own eBay account, PinkPuffStuff, but he never sells anything because he's a greedy-ass piece of pink shit.