“It looks like a laptop on heroin”
~ Oscar Wilde 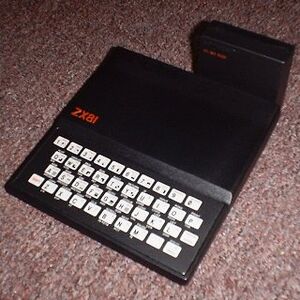 A ZX81 in all its glorious glory

The ZX81 was in fact the world's first electronic computer, invented by the English scientist Sir ZX81 in 1890. English computer buffs bleated on about this great unsung achievement for nearly 90 years while the Americans got on with making money out of inferior technology. The US Department of Truth suppressed the real story even though the ZX81 won all intervening wars by itself, until modern technology in the 1920s finally caught up and left the ZX81 behind. At that point, the big daddy of all English hyperintelligent boffins, Sir Clive of Cambridge, bought up all remaining ZX81 stock and sold them to Timex as the Timex Sinclair, "The World's first sub-$100 home computer". Some of them even worked - sometimes. When the damned fool Americans realised they had been had, 28 days later, Sir Clive had cashed all their cheques and blown it all on developing the world's first electric car, the Sinclair Edsel. The ZX81 is the most common computer in Canada due to Dell, Gateway, Apple, and Microsoft's pledge to only ship their computers to the US.

The ZX81, a laptop retailing at £800, was an innovation for the 19th century. It was sturdy enough to withstand the most raucious dances and buggy rides. The first ZX81, bought by Lady Herstenshenshire of South Sussex, was used to send some of the first emails regarding raucious parties and buggy rides. However his greatest achivement was the invention of frozen peas, an idea he had work on since being released from a lunatic asylum, the idea was simple the end result was astounding and as a result history was made the world could now have pie,chips and peas instead of just pie and peas

After that point the entire English manufacturing and technology industry crumbled into the sea and the country turned into a nation with bad teeth and an obsession with things past like World War 2, 1966 (the year the English invented Football - round balls please), chivalry, the British Empire, Pride and Prejudice, crumpets and so on. Except that after the ZX81 Sir Clive pulled off a master stroke by losing a contract for the BBC Micro to a little company called Acorn who went on to spawn the ARM processor which is the CPU used in all phones, PDAs, Urinal Douches and rice steamers on the planet so at last the English own all your computers OMFG LOL!!!!!