From Uncyclopedia, the content-free encyclopedia
(Redirected from IPhone)
Jump to navigation Jump to search
iPhone
left 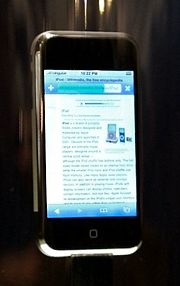 Animation of the iPhone, attempting to load a webpage.

“And if you want useless shit that you don't need and an endless supply of spam? There's an app for that!”

The iPhone is a brain control prototype, aimed at those in the lower end of the intelligence scale who will buy anything because it is allegedly fashionable. The device is the culmination of several years of research and development at Apple, in to how they could further extort money from customers while maintaining an almost Big Brother style control over "their" device.

It now features a larger screen in order to get the Brain Rays into the users brains more easily, which then forces them to buy the new iPhone and murder their mothers. This 'World Domination App' was activated on the 21st of December 2012 and failed to wipe out the human race. 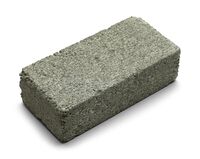 2008 was a special year for the iPhone. One of the features it was widely criticized for not having that their Blackberries and other assorted smart phone brethren have had this feature for several years, and could still do more than the iPhone 3G (as it was known) could.

This resulted in flamewars on the internet in which the Apple fanbois proved themselves to have much lower IQ's than originally thought, and the Smartphone owners proved that just because you have a brain doesn't mean you can win a war.

In 2009, Apple decided that it was a perfect time to attempt to extort more money out of their customers and released an update to their device. New features included a higher resolution camera and voice command. The Smartphone owners further pointed out that their phones had had this feature dating back to as early as 2006, but numerous fanbois went and pwned the Smartphone owners in one of the largest flamewar known to mankind. 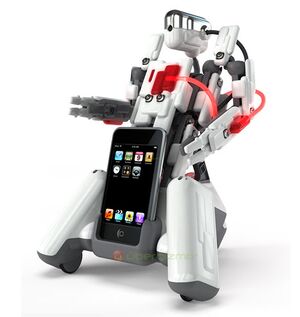 Yes, it does this too.

The most notable feature on the iPhone is that it has the ability to make calls. But that's not all; it can also send and receive text messages. Steve Jobs professed to have invented these features which could be cause of the large volume of sales of the phones, as most consumers will believe anything that they are told.

The camera is also famed for being one of the lowest resolution cameras in a phone. Coupled with a lack of a flash, this will guarantee that any night shots will make the most beautiful person look like a large brown mass.

Synchronisation with iTunes has also been touted as one of the greatest features to be provided in a phone. Cumbersome methods of synchronisation and activation have never been so much more convenient.

iOS 5 brought iCloud, Apple's own cloud service, to the iOS ecosystem. According to Apple it is extremely secure and unhackable. It is so unhackable in fact, that in 2014, Jennifer Lawrence's iPhone got hacked and her nudes got leaked to the Internet.

iOS 6 has also brought Apple Maps to the iPhone. This magical new software has transported old locations to interesting new ones. For example, most restaurants are now located in the sea and your iPhone may detect your current location to be in the middle of an Australian Desert.

iOS 7 brought an entire new design to the iphone including a brand new direct line to the nearest iPhone store for when your brand new iPhone inevitably breaks. iOS 7 was a completely new destination for Apple as said by Steve Jobs in an interview, "You Fucking sheep people will by anything so fuck off and get out of my bathroom."

iOS 8 has completely changed the way we think about iPhone. It changed all we knew about it. The features, such as communicating with "useful" technology like a Mac, are shown best by Steve Jobs "How the hell did you find me I died after the last interview what the hell" Truly and literally spoken by an angel.

iOS 9 re-vamped built in apps, such as adding MS Paint to the app Notes, which allows users, most prominently, to attempt to draw a picture of what they're supposed to be doing, only to be unable to recognize what they were drawing because they were using their finger to draw something on a fucking phone screen. Additionally, Apple Maps now supports the ability to detect what buses can drive you to the Atlantic Ocean.

iOS 10 was the best update, as it added characters from The Emoji Movie to the iPhone.

iOS 11 did a whole lot of nothing. As Steve Jobs said about iOS 11, there was nothing significant that was new, as Steve Jobs is dead.

The new iPhone 6 Plus has a feature called iBend. In your Hipster skinny jeans, your iPhone 6 Plus can bend. This iBend feature is what some assumed to be the first curved screen iPhone.

The newest model, the iPhone X, is a genius system, as it costs a thousand dollars (or more, depending on the country), and is made of glass, effectively making it so that anyone who gets it will inevitably pay at least $2000 on 1 stupid phone. And, because of the behavior of Apple users, it is guaranteed to make billions in profit as iDiots buy dozens of replacement phones. Truly, the genius of Apple continues to surprise scholars to this day.

However, what may be the most prominent use of an iPhone is to use it as an iBrick and throw it through a window, as it is essentially an expensive brick with a shiny paint job that also functions semi-efficiently as a cellular phone.

The iPhone Target Market was aimed to be the young and the hip. However, not only has this target market been hit quite well, it has also leaked onto other target markets, of which include the French and That Guy. Business owners have also begun decommissioning their BlackBerries and other assorted smartphones so that if they get a call in a meeting, they can appear to be "cool" to their clients. This ultimately fails as in most cases; clients tend to be smarter than they pretend to be.

There are two main diseases known to iPhone users: iDiot and iLove. 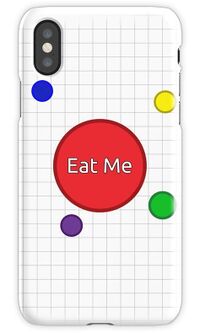 An Iphone that once belonged to Alice in Wonderland.

Use of the iPhone eventually induces a mental condition in all users called iDiot. This is because, that, owing to the fanciness of the device, the users consider themselves to be above everyone else and therefore treat them as a License to be Stupid. The disease itself, however, exhibits many symptoms, such as causing accidents on moving walkways, using their so-called phone when driving on a busy, multi-laned road and other general violations of common-sense and decency.

Another notable symptom is the obsessive need to waste money on Applications, more commonly known as "Apps" for the iPhone. These "Apps" are usually small programs that provide information that the user could just as easily look up on the internet, but since it goes through the app, the information is therefore deemed a lot better and sexier by the user.

Having such a rare and precious treasure like an iPhone inevitably causes the rich users to be paranoid of having it stolen from them. For this reason, most iPhone users will wear tattered jeans and old shirts like their deceased cult leader. Their hair will usually be unkempt, and they will frequent dingy little coffee shops and bars with couches and chairs that all are sagging and falling apart.

Eventually, the mind of the iPhone user will completely melt into nothing. Most users of the iPhone are youth who seem to think that anything with an Apple logo on it is "cool", and therefore own an iPod and a MacBook, when in reality, nobody cares about the Apple brand anymore.

iLove is also another disease, resulting in users to constantly talk about their love of iPhone non-stop. These users will generally rave on about how their phone can send MMS and copy and paste thanks to recent updates, unbeknownst to them that almost every other phone has been doing this for the better part of six years.

Is where adults leave their iPhone with kids so they can go shopping for in-app purchases that have no use in real life e.g. buying a "storeful" of inedible digital donuts in The Simpsons "Tapped Out" app or a virtual quarry's worth of pixellated shiny gems.

As most iPhone owners cannot seem to live without their devices for very long, taking them away would merely result in said owner going a murderous rampage to get their device back. In all documented cases, the only known cure is summary execution, in which the blight on society is removed from public, taken behind the chemical shed, shot, and disposed of.