The iPod yocto is Apple's 1,337th digital audio player this year. It was introduced Tomorrow* as a part of the company's newest line of fun-time gadgetry**.

The yocto is the smallest possible iPod: any smaller iPod wouldn’t make sense physically. It is based on yoctotechnology, which is smaller than nanotechnology. Its width and length are physically impossible to measure simultaneously, and it is the first known digital audio player to weigh less than air. We cannot properly say the universe began until one iPod yocto had been manufactured.

The iPod yocto was launched under the slogan "You have got to be kidding me... No seriously we have a lot of time on our hands"

Not only this, but the player holds such a high amount of songs (0.5 song) that our whole lives couldn't be spent listening to them all. Apple are known for making machines with gobsmackingly useless capacity which is hardly dented by your entire music collection, so this is an innovation. It is the first iPod ever made that can fit inside of a bellybutton and still leave room for the yocto recharge kit, yocto amplified speakers, and yocto cell phone conversion kit.

It was launched in two colors: burnt sienna and mustard.

* This author does NOT engage in insider trading.

*** May not work if you are called George W. Bush or if you love pretzels 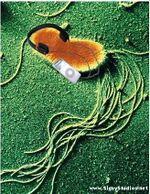 This customer is sure enjoying his new iPod Yocto

The reaction was extremely positive at the announcement, and over three billion units were sold, generating over 19 quadrillion pesos in revenue for Apple. eBay took a hit, as several million old iPods went unsold. Market analyst Steve Ballmer noted, "I love iPod yocto. I love puppies. I love all people. We need more love, and less hate. Spread peace!" He also wishes death on many people.

The IPod yocto is the best consumer device ever created.

The Chinese government banned this player due to Apple's alleged plan to overthrow the existing regime by selling the yocto cheaper than the chinese copycats.

Most customers wondered why they could not see their iPod, which would be different than the picture on the box. Apple responded with a press release stating, "Box images not to scale." About 99.192% of costumers complained of losing their iPod within seconds of opening the package. A few customers reported accidentally eating their iPods, and only knowing of the ingestion when diagnosed with silicon poisoning.

Some customers also reported minor cracking of the screen during the osmosis process.