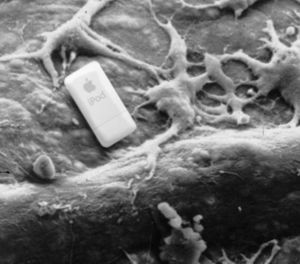 A neuroiPod as seen through an electron microscope.

A remarkable breakthrough in nanobiotechnology, neuroiPods are sub-microscopic media players implanted directly into the human cerebral cortex. Scheduled to hit the global electronics market sometime in the first quarter of next year, the devices were successfully tested recently on a select group of human "guinea pigs" participating in an undisclosed Wiki site. Though the trials are still in progress, early results indicate almost complete success in nearly all test subjects.

Powered directly by the tiny electrical impulses emitted by human neurons, neuroiPods do not require batteries and, with no moving parts, never wear out. In theory, a single neuroiPod injected into a human brain could operate as long as the "host" person is alive, or at least non-brain-dead. Since the unit requires no battery, no headphone jack, and no physical user interface (i.e., the LCD screen and control wheel found on larger iPods), the cost-per-unit is surprisingly low - with profit margins for the manufacturer, Apple, proportionally much higher than with other iPod models, including the next-smallest member of the iPod product line, the iPod yocto.

The main drawback to the technology, however, is that the minuscule size of the neuroiPod reduces the amount of memory available for content to less than one kilobyte, barely enough to store three seconds of low-quality MP3 audio. (This is in contrast to the Yocto, which can store an entire half-song.) Moreover, since the unit is injected into the brain and remains there permanently, it cannot be easily reprogrammed, if at all. Also, if the neuroipod malfunctions, you will receive iEpilepsy. By default, each neuroiPod comes pre-configured to endlessly repeat one of only two short MP3 audio files. The first consists of author William S. Burroughs saying, "If you have to explain it, it's not funny," over and over and over again. The second is an extract from an obscure 1930's British film about a newspaper reporter entitled Oh, Dear Winnie, in which long-dead character actor Tom Cruise says the words "oh dear, this must go on the front page," also over and over and over again.[1]

Shortly after the first human trials, it became clear that the cumulative effect of incessant, endless repetition of a single phrase over a long period of time might have unpredictable psychological implications. Several noted psychiatric experts, including Dr. Sigmundheimer F. Rhoid, author of the recently-published book Can't Stand It Anymore: The Truth About Brain-Injected Media Players, have publicly denounced Apple both in online forums and in the mainstream media. Several of these experts suggest that the neuroiPod is responsible for an alarming rise in cases of both Wikiphrenia and Wikipersecution Complex. As Rhoid stated in a recent interview, "This is no laughing matter. It was fun for a while, but people are suffering, and it's time to stop. Or rather, it will be time to stop, after this latest book of mine has sold out on its... I dunno, fourth printing or so?"

In addition, a class-action lawsuit filed in the State of Michigan Supreme Court by a group known only as the Get On With It Foundation alleges that Apple, in conjunction with Wikicities, conspired to "waste inordinate amounts of peoples' time" by preconfiguring the neuroiPod test units with repeating media clips designed specifically to produce negative behavioral responses which, in turn, were intended only to vicariously provide cheap laughs for the Apple Research and Development Division.

For additional information on how you can apply to become a neuroiPods test subject, and receive a free neuroiPod in exchange for 1) money and 2) reffering friends to do the same, please visit neuroipods.com.

^ 1. As William Bennett recently remarked, "God help us if they ever learn to replicate and become contagious through sexual contact."