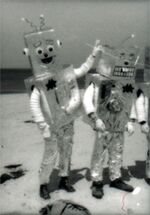 This is a image of two nanobiotechnobots at their best, working on a new, better and more comfortable version of the modern day toilet seat

Nanobiotechnobots are almost completely controlled by a "central computer" called Peter (or Saint Peter, or simply peter). No one admits to know where Peter is located, not even the Nanobiotechnobots, since the nanotechnologists have a habit of closing their eyes when they are reaching for Him. Some say that Peter is impossible to find as he is really very small, but the cause is probably that their particular instance is smaller. Destroying Peter, theoretically, will cause all the Nanobiotechnobots to be killed in a massive Nuclear explosion, which is a bit of an inconvenience, because there are many'a'Nanobiotechnobots on Earth, so many that only one word can sum it all up, LOTS. That or all the Nanobiotechnobots will enter into an unstoppable, psychotic, muderous rage, drilling every living thing in sight, and chanting INSEMINATE, INSEMINATE over and over and over again, which leads any survivors to inseminonanity, that it must be said that it is groin-grabbingly insane to properly describe it. But on the other hand, if we somehow hacked into Peter, we might be able to take control over Nanobiotechnobots, but thats never gonna happen because Peter has a copy or Norton Internet Security which he updates regularly.

Nanobiotechnobots vary in their size, weight, ability to completely odilterate cute little bunny rabits, and ability to genetically modify Cold Turkey. Nobody really knows how they were made or held together, although it has been rumored that wood glue does the trick.

Nanobiotechnobots have been around for a long time. They were even around when Earth was still materialising. They did actually appear in the Jurassic Park movies, they were just (as mentioned eariler) really fucking small.

Some religious members believe that jesus was sent back in time from the future and used nanotechnology to raise Peter from the dead, as well as summon demons and pacify robots from the future during a class C robot rebellion. Some, however, consider this a blasphemy and maintain that Jesus practised nanobiotechnology only after his drinking parties with assistance of Mary Magdalene.

Through the use of Nanotechnology, womankind overcome many of its most trying obstacles, such as dealing with their parents, and coming up with rent money. Eventually, the theorists were able to discover the means by which womankind could remain happily married, something Fonzarelli was never able to do using AAAAAY! Theory.

Scientists have also discovered that the word "nanotechnology" itself seems to generate government funding and science grants without question or limit. This has baffled many in the review selection process, who realize it is just a buzz-word.

Unfortuantely much information pertaining to the remaining history of Nanobiotechnology and Nanobiorobotics has been lost during the 2001 blackout known as the "Dark Ages" or it's racially correct term, "Time of Less Vision"

Two friends on a trip lie together to sleep in a tent in the evening. After a while, one asks: Johnny, are you jerking off? Yeah. And does it go? No. So try jerking yours.