“I've never sucked a sweeter Peter in my life.” 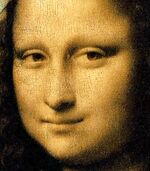 For those without comedic tastes, the so-called experts at Wikipedia have an article about Mary Magdalene.

Mary Magdalene was born in Magdala, Galilee to Chronos, Zeus's father, and the Virgin Mary. This lineage did give Mary Magdalene some prestige in her society because her father was considered to be a minor god. Some say that she was raised to become a priestess for the cult of Asherah, spouse of YHWH, but there is little evidence for this. When she met Jesus, she became a follower of his new religion.

The fact that Jesus and Mary Magdalene had a relationship is hinted in some of the ancient tabloids. It is known that Jesus repeatedly flirted with her often in public, to the dismay of the Moral Majority.Jesus had learnt beforehand that Mary was heavenly at sucking dicks, therefore, he snook down from heaven (careful to put some pillows under his duvet so God didn't know) and checked out the action.Despite this, Jesus made it clear that he loved them just as much in a spiritual sense. At that time, it was required for Jewish teachers to be married but Jesus's own teacher, Moses, was an asexual whose only hobbies were playing Dungeons & Dragons and building wooden ducks.

After the death of Jesus, Mary Magdalene started to spread his teachings as an apostle. However, people weren't interested in her public performances, writings and lectures. Instead, people only remembered that she had dated with Jesus, and she was considered an annoying wannabe celebrity. It is practically impossible to find out, what Mary Magdalene originally taught, because no Mary Magdalene's works or other people's descriptions of them are left. Still, some religious groups like Gnostics and Christo-Wiccans claim that they are based upon Mary Magdalene's teachings, and have preserved them well. However, there is no reliable information of the early days of such groups.

After Dick Cheney and Constantinople conspired to "cover up" the fact that Mary Magdalene was the best johnny-licker this side of Babylon, Karl Marx made it his mission to reveal the truth. Approximately 40 years later, his personal papers were discovered, providing unquestionable evidence that Mary Magdalene did, in fact, take it down the throat from Jesus. Marx's methods were precise; using mainly metal detectors and his bulldog, Commie, to find the truth. Marx eventually won the Nobel Peace Prize for this discovery, even though it plunged the world into World War IV.

Many people have declared themselves to be a descendant of Mary Magdalene and Jesus. They include:

It has been rumored that Mary Magdalene is the same person as That old woman next door.