That old woman next door

She's up there... watching, waiting, smoking...

That old woman next door has owned her house since before you were born. Her house isn’t like anyone else’s house, because it’s really old, and has a tower. The siding is badly weathered, and there is a tin patch on the roof.

Most likely for their own safety, it's no small wonder that the so-called experts at Wikipedia continue to avoid all mention of That old woman next door.

The old woman leaves her house twice each week. Every Sunday morning, she is picked up by a man in a green Cadillac; on Wednesday evenings, it’s a white-haired lady in a blue Dodge Dart, chewing on a German Snackard.

Once, your mother sent you over to her house with a piece of mail that got delivered to your house by mistake. Just when you got up on the porch and were about to put it in her box, she came out and grabbed your wrist and wanted to know "what you thought you were doing" with her mail. When you told her that your mother sent you over because the postman dropped the letter in your mailbox by mistake, she got this crazed look in her eyes, tightened the grip on your wrist, and said "we'll see about that." Then she let go of your wrist and disappeared inside. After that, if you found any of her mail left by mistake, you just threw it away, because you didn't want to have to deal with that crazy old bitch ever again. 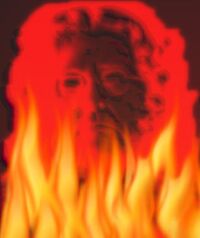 A rare glimpse of the Old Woman Next Door.

The guy driving the Cadillac is her son, Delmar. Delmar has a wife that he found in a catalog called Cherry Blossoms, and a couple of kids, but they don’t come along with Delmar every time he visits. When they do, your mother tells you to be really nice to his son Les, but not to get too close to him. And whatever you do, do not let him show you that "neat-o" collection of toys that he has in the barn behind the house. Evidently “Leslie” went to a special school because he wanted to be a doctor, and he’s been caught playing "hospital" a few too many times with other kids in the neighborhood. If you won’t go into the barn with him, he’ll pass the time using a magnifying glass to burn ants to death on the sidewalk, because the old lady doesn’t like him going into the house either.

Delmar’s daughter, for some reason, parades around the front yard hoping that you’ll notice that she’s playing alone. She’s playing alone because she's the sort of girl who starts out being a fun playmate, but then she starts wailing on you. When her mother catches that going on, she comes over and starts yelling at you, and then bitch-slaps her daughter and tells her to get in the car and be quiet.

Meanwhile, the old lady’s daughter Marla is, in fact, a vampire. You know this because you heard your parents call her a Lady of the Night one evening after they saw her leave the old lady's house. And if you think about it, you’ve never seen her in the daytime. As a matter of fact, the only other time you ever saw her is when your father pointed her out on a street corner while she was supposed to be "working." But she wasn’t wearing a cape, just hot pants and a spandex jacket. 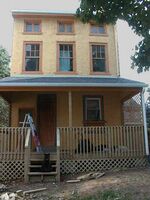 I tried to get a picture of all the cats but they just scatter before I can get close enough. Except for this black cat, it just sits there and stares at me.

Your mother has been in the old woman's house just once. That was when the rescue squad arrived and put the old woman on a stretcher, and took her to the hospital after something bad happened to her. When you asked your mother what was in there, her response was: “Well, just what do you think is in there?”

Well, if you knew what was in there, you wouldn't have to ask! Duh?

Of course, you have no idea what’s in there, because the windows that face your house always have the shades drawn. But what ever it is that's in there, it smells like fried food and Camel cigarettes. You never see anything actually happening in there either, and every Halloween the place is as dark as pitch.

Indeed, the only time that you’ve ever seen anything even remotely resembling human activity in that house was on two occasions when you were outside playing, and you happened to look up at her house and see into one of the windows just before the lace curtain twitched and closed. Once, when you were up in your room in the middle of the night, you got up and pulled the shade aside just wide enough look over to the house — and you saw the tip of her cigarette glowing red-hot from the dark window facing yours. She must not have noticed you, because she smoked that entire cigarette.

The old lady next door now has an oxygen canister delivered to the house every Monday morning by a man in a truck. She's on oxygen because she's ruined her lungs smoking those cigarettes. According to her grandson, she hasn't quit smoking even though there is a danger sign on the side of the oxygen canister telling her not to smoke anywhere near it. But she lights up anyway, one right off the other. You just hope that when she does go kaboom she'll be somewhere else, like church.

What's under her porch?

There are hundreds of cats that live under her back porch, to whom she feeds scraps that don't smell very good. When the cats get really hot, twice a year, they complain loudly by wailing in an ungodly chorus of sounds that make you wonder: are they suffering, or are they having fun? Sort of like what your parents sound like when they go into their room to discuss something really important and flip the lock on the door.

One day, after the Mormons visited your house, your mom got really excited. It wasn't just because they had left - it was because the next house down the street was hers. You both looked out the window to see what would happen. When they got near the house, one of them started toward it, but the other Mormon grabbed his arm and pulled him back. And here you thought Mormons weren't afraid of anything.