Little boy who lives down the street 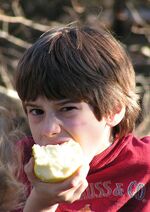 You just know there's a razor blade in that apple. 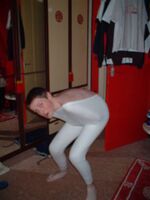 Seriously, what the heck?

In your house, or in the house of a friend or relative, there will be a covered bowl of Brach’s™ Sour Balls in the living room. They look good enough to eat, and they usually are, but the little boy down the street died from eating one. There was nothing wrong with the sour ball, Your Mom will point out; what killed the little boy was that he didn’t listen to the nice lady who gave him the sour ball, and started to run home and tripped on the sidewalk (or sometimes his own shoelaces). This lodged the cherry-flavored sour ball in his throat, and he choked to death. The nice woman who gave the little boy the sour ball felt just awful about it.

In your aunt’s house there is a bowl of Jordan almonds. You’re just about to pop one in your mouth when she tells you that they aren’t safe to eat. As it turns out, your aunt's best friend from down the street stopped by for a visit with her son, and the little boy ate one of the Jordan almonds. That night, he got sick from eating the almond and died. The doctor said that it was a horrible death, caused by the fact that Jordan almonds are stored in bulk at the warehouse, where rats crawl all over them. When you ask why they’re still there if they killed this kid, you're told it’s because the pretty pastel colors nicely match the wallpaper décor. When you ask what the little boy's name was, she said she "doesn't remember," and when you ask how she could have forgotten her best friend's son's name, you get in trouble for being "fresh." However, your aunt still feels absolutely terrible about the incident anyway.

Dies from running with scissors

In your house, or in the house of a friend or relative, there will be a pair of pointed scissors that you might one day need for the purpose of cutting something, but you stand no chance of ever getting to use them. Why? It’s because the little boy from down the street came and said that his mother was in need of scissors, and could she borrow a pair? But he didn’t listen to the nice lady who lent the scissors to her, and began running home with them when he tripped on a crack in the sidewalk (or on an untied shoelace), and was killed when he fell on the pointed scissors, gutting himself like a fish. The nice woman who gave the little boy the scissors felt really sad about it.

Dies by can lid

He's always impaling himself on the backyard fence and bleeding to death. The Johnsons feel just awful about it.

In your house there is an electric can opener. You want to play with it, or maybe just open a can with it, but if you do, you run the risk of cutting off all of your fingers — not from the opener itself, but the sharp lid removed by it. Just like what happened to the little boy down the street. He didn’t listen to his mother, and now his dreams of being a concert pianist are shattered. Even the broom factory didn’t want him. And then, the cuts got infected and he died from septicemia and gangrene. However, it should be pointed out that even if he had not cut off his fingers, he would have died from a virus that was carried on the can lid and dispersed into the food when the filth on the can lid was mixed into it. His mother is just beside herself with grief.

At the age of ten, while attending a fourth-grade Social Studies class, your teacher descended on you like a madwoman because you put the tip of your pencil in your mouth (even though it's not lead, since pencils have NO LEAD in them). This is because that teacher once had that same little boy in her class, and he did the exact same thing, only to die a slow excruciating death from lead poisoning. Evidently, the kid next to you knows all about this because later on, he tells everyone at recess that the lead poisoning turned the kid into a moron who spent the last miserable days of his life riding the short bus to Special Education classes, and was forced to wear mitten clips. The girl who sits behind you tells you that she feels just terrible about the fact that you, like the little boy, can look forward to little more than a future of constant drooling and always requiring assistance to go to the bathroom.

Dies from sitting too near the television

In your house, or in the house of a friend or relative, there will be a color television set, and you will need to sit at least sixteen feet from it to watch it safely. Why? Because Mother knows of a little boy down the street who sat too near the color television in his home, and is now sterile and will never be able to father his own children. It also ruined his eyesight, but that wasn't the worst thing that happened to him. Indeed, he actually died of a cancerous tumor caused by radiation emitted by the television. His parents feel just awful about it.

Killed by the ice cream truck

On your street is an ice cream truck that comes by each day. But you are not allowed to go out and buy ice cream, because the little boy down the street once bought some ice cream, and there was a razor blade hidden in it, which caused him to choke on his own tongue when he tried to swallow it. And if that was grisley enough, his untucked shirt tail got caught in the truck's metal body and he was draged for several blocks before the material tore and he crushed to death under the wheels. Then the Good Humor Man kidnapped him and sold him to a wealthy Japanese businessman for purposes unknown. His older sister felt so terrible about giving him the $1 for the ice cream that she moved into his room and made it her own. Of course she feels just terrible about it, (and thats just fine by her).

On your street, or the street on which a relative lives, is an old derelict house that promises to hold all kinds of treasures. The windows are boarded up, and the weeds are three feet high. It practically begs to be explored.

This derelict dwelling looks quite interesting

Your mom, however, and even your dad, aunts, uncles, and grandparents, have repeatedly and expressively forbidden you to go anywhere near that old abandoned house. "Why?" you ask. Because not too long ago, a little boy who lived down the street was reported missing by his parents. Weeks later, his dried-out corpse was found in one of the walk-in closets on the third floor of that house. Apparently, he had broken into the house (possibly by way of the route you are currently considering) and accidentally locked himself into the closet (or tripped into it by an untied shoelace). Nobody could hear his screams for help, but just as the initial panic passed him, he realized that he could use his mobile phone to call for help. Unfortunately, the battery had just run out (actually, his Brother took the battery out). Everyone on the street feels just terrible about the incident, but no one will do anything about the house because they don't want to get "involved." LOL. 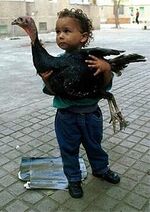 You are not allowed to ride your bike beyond the mailbox on the street corner. Why? Because on the street where you or a close family friend lives, there once lived a little boy that wasn't very careful. One day he rode his bicycle just past the street corner that his parents told him never to go beyond. After he turned the corner, he was captured by gypsies who threw him in their caravan and held him against his will. He's never been heard from again, but his mother found a tambourine one day on her front porch. It was the gypsies' way of saying that they felt just terrible about taking the little boy, but not so terrible that they would return him.

In town, there is a gun shop, but your mom won't let you use guns. Why? Because a little boy down the street had an accident involving one. One night, while his parents were asleep, he decided to sneak out of his bed and go into his father's office. He was rummaging through the desk drawers when he came across a .357 Magnum hidden in one of the drawers. He picked up the gun, checked it out for a bit, but while he was looking down the barrel, he pulled the trigger, not knowing it was loaded. The gun went off and plastered the kid's brains all over the wall. His father felt just terrible about the incident, and now a bunch of bullshit liberals are calling for stricter gun control laws.

You find some matches, and decide it would be fun to experiment with them, but the minute your mother sees you with them she takes them away and smacks you so hard that you land in next week. Why can't you play with the matches? Because, according to your parents, there is a house on your street that burned to the ground because of the little boy who lived there played with matches. His parents told him not to play with matches, but one day, when they weren't looking, he got into something that he wasn't supposed to and found a match — which he lit. Mere seconds later, the curtains were on fire. He tried to throw a glass of water on them to put them out, but the water splashed on an electrical outlet, and sparks shot out into the room, setting the shag carpeting ablaze. The little boy was killed in the fire, and when they found his charred body they discovered that he had tried to escape while running with scissors, and had tripped on a piece of molten carpet, landing on the scissors, which pierced his throat and caught the sour ball he was still sucking on at the time. In effect, his chances of survival were practically nil.

However, as your parents pointed out, his parents felt just terrible about it, until the insurance check arrived to rebuild their house. Once they settled their lawsuit with the match company, the carpet and drape manufacturers, Fiskars, and Brach's, things started to look up for them. Now they can't remember their own little boy's name, and neither can your parents.[1]

^ 1. In fact, your parents can't remember your name either, which is why they keep calling you "honey."