Paradox in a Can 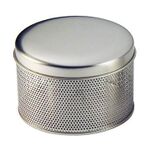 An Unlabelled Paradox in a Can awaits to surprise child and physicist alike.

The Paradox in a Can is one of the University of Oxbridge's more radical inventions, and is still popular among children, having been next year's most popular toy. The device combines all the fun of a metaphysical, reality bending temporal paradox with the unbeatable schoolboy charm of things in a can. It appears as a small, brightly-coloured tin, which when opened causes an internal mechanism to explode five seconds before the opening occurred, creating much head-scratching jocularity among its audience. More practical uses for the devices have not yet been found, although they have been estimated to have shortened the lifespan of the Universe by some 2 billion years, a much-needed relief to cynics everywhere.