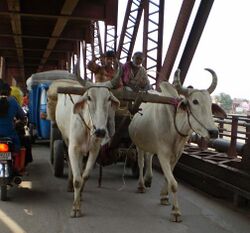 Two OX on a bridge. Obviously. No, I'm not talking Bullocks.

Oxbridge is a derogatory term used to indicate British universities audacious enough to claim to have been founded before St. Andrews (the university of Golf). It was once a small town in England, which home to the World's first ever non-golf related University. However, in recent years expansion of said University has been so rapid that almost the entire town has been demolished to make way for it, and now only Giggle Street, The Mews, and Fleshmarket Close remain. Oxbridge University is the most ridiculously impossible University to get into on the planet. This is due primarily to the fact that it has long since ceased interviewing potential students, instead telepathically screening all 17 year olds on October 12th, Cewster's Friday, and selecting those who show the greatest attraction to the stale, wizened tutors and possessed of the silliest accents. Years upon years of overly ambitious projects by some of the most terrifying minds ever known have made the area very, very strange indeed, and the space-time continuum is understood to be so warped around some of the more sciencey colleges that some students are able to graduate before even getting to the University, a time honoured British tradition. The History of Oxbridge is so long, and intense, that if you can find anything there that makes sense, at all, you've quite probably already gone mad.

There are 514 colleges making up the University, which range from the ancient, such as Wastrel College, founded during the last Ice Age to the modern, such as The David Cameron School of Economical Hoodie Hugging founded ten minutes ago. There are living colleges, pet colleges, and colleges that span more dimensions than their fellows have pick-up lines. There are piles of dead students. Each of the colleges is interesting in its own way, and each contributes to the scale, ability, and paperwork mounds of Oxbridge. The prestigious nature of the University comes down to more than just the teaching quality and history: The place is so dangerous that only a real genius can possibly get out alive, whereupon normal hair and a rational mind are merely frivilous luxuries.

Now this is just a load of Bullocks.

Most degrees at Oxbridge last for 3 years, although some, such as chronology, last for significantly longer, and some, such as gullibility, last for no time at all and cost £60000. New students are subject to hazing rituals that include being dangled from Flitterby College being annexed to the sewers, or being beaten to a bloody and early death, these pursuits being considered a valuable part of student tradition.

Generally, four years after graduation, Oxbridge graduates can, upon paying a nominal fee, convert their B.A. degree into an M.A. degree, without further academic work. That much is common knowledge. However, they also then can, on entering the Oxford League and enduring humiliating rituals (e.g., having to work in a job), receive a Ph.D. degree, without further academic work; this conversion process is called "getting the third degree".

Never, under any circumstances, mention Oxbridge University to a graduate of the University of Oxford or the University of Cambridge. Long considered to be Oxbridge-reject Universities, the embittered students are likely to take a near-lifetime of repressed rage out on your well-meaning self.