From Uncyclopedia, the content-free encyclopedia
(Redirected from University)
Jump to navigation Jump to search 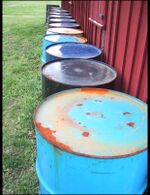 For those without comedic tastes, the so-called experts at Wikipedia think they have an article about College.

While the word college was originally coined as a term for a division of a large Paleolithic university (e.g. "Oxford University College of Leech Therapy"), the term was later used to refer to the post-adolescent stage of human development (generally between the ages of 18 and 22) during which young students are helplessly driven to fornicate, smoke large amounts of weed from bongs, and pretend they know everything. College age now has extended up to the age of 25, when most people don't like the responsibility of getting married and having a job and that boring life, and would rather just have sex. College is in modern times considered a coming-of-age ritual, much like toilet training or killing a hooker. Some losers that don't seem to want to grow up and face reality go to VoTech, which is a place where you can wuss out of dorm life and learn some useless trade that the Chinese had done better, and you wound up working at McDonalds for $7.89 an hour with a bunch of dirty sleazy Mexicans feeding the college age kids you never met.

Interestingly, part of this coming-of-age ritual involves the separation of society into eight groups.

The most successful group achieves an almost shamanistic ability to see through the hazing ritual of receiving one's grades; they understand that it is in fact much more important to spend time in the company of other college students and pursuing other things having nothing to do with the work that is assigned than to actually do the work. This is significant because it is contrary to explicit instructions given, and the drop in grades that occurs as one does this is usually berated by professors, parents, and others. When the week of final exams arrives, there is usually a college-wide panic and a boom in the manufacture of Adderall.

The least successful group does not attain this ability. They persist believing in the beneficence and honesty of those overseeing and directing their experience. The least successful of the least successful are given consolation prizes at graduation, often in the forms of medals, fancy Latin titles, Greek titles, Slavic titles, Islamic Arabic titles, and something with weird symbols in the like of Prince, letters from the very beginning of the alphabet (mostly "A" or occasionally "B") or encouragement to attend graduate school as a remedial measure. This is, in fact, the final illusion of the college experience for the least successful; the moment they get out the door they will long for the creative, personally authentic spirit they once possessed, but sacrificed to achieve the consolation prizes. A few recover; many do not.

The third group are those who follow the path of the least successful but, in a mutative change, manage to achieve financial success. They still, however, find that their amputated spirits give them trouble, in a condition known as phantom personality pain.

College is considered by many to be a magical part of their lives. This is perhaps facilitated by the weak memories of older generations, whose recollections of their college years is mostly lost in a haze of pot smoke, Jack Daniels, and magic mushrooms. Thus, reliable accounts of college are difficult to obtain, and the matured students themselves offer contradicting accounts.

College is also known as a guaranteed one-way ticket to personal and financial success in later life. Research has shown that a matriculated student with a baccalaureate degree may spend as little as two years in therapy to stop crying uncontrollably on a daily basis. Also, students with a graduate school education have been known to accrue under $15000 in debt while looking desperately for a meager shipping job, and to get by with their parents supplying as little as 20% of their postgraduate expenses once finally employed.

What People Tell Us About College[edit]

"College is a place where people learn. If you're not in college, you're not learning. If your are in college then that means you have the ambition to learn. And if you dont have that ambition... play football. Football is the greatest sport there is. Brett Favre is the greatest player in football. He kicked some ass with the Minnesota Vikings and he fucked the pussy of all the Dallas Cowboy cheerleaders. Oh that hot brunette I want to do so bad. I wish I can give her a double orgasm. Football teaches you things you can't learn in a classroom. Yeah Brett Favre is also saying he is planning on being back with the Vikings this year. After the Saints beating him during the NFC championship, he gave it up. Great teamwork and good team skills... Did you see that!? That was a great interception. You see here is Chad Johnson and there you see Palmer throw the ball...and BOOM there Troy Palamalu appears. Man that guy can jump I'll tell you. See that was a great football play. To explain things further... here is the quarterback. Palmer starts to throw and then BOOM you see that big defensive lineman come up and almost get the sack... what a great effort that is. Because of the pressure Carson Palmer is forced to make a bad throw causing the interception...and remember kids! For those tough days on the field, get Tough Actin' Tenactin! ...Ok now for the next play." If you don't like football, you are a communist.

John P. Wombat graduated with a degree in Kegonomics from Hops University in 1978. He recounts his experience as:

Of his college years, 38-year-old Phil Longsley of the International Vommunity Gollege offers the following account:

Guy Harris most recently of New Zealand had this to say about College:

College-age men and women tend to gather in social cliques called schools, in order to copulate with maximum efficiency. This efficiency manifests in three key aspects:

1. Proximity. Demographics show that "I hate college but love all the parties, finishin kegs and crushin bottles of bacardi. King of the class I'd rather lay up wit a hottie. Single doesn't mean I'm lookin for somebody. Some say a drink blaze up but hardly, popping pks get a little bit of marley. Am I out my mind? Most people say probly, but I been on my grind puffin nugs of that cali."

2. Liberty. Students living in a central area can get away from the authoritarian mandates of their parents, who generally impede upon sexual prowess. For example, using the pickup line "I live in my mother's basement," is a significant impediment to success in sexual negotiations.

4. Knowledge storage. Colleges are storehouses of knowledge. This is clear because bright eyed individuals enter thinking they know everything and leave, broken, knowing they know nothing. The knowledge is sucked from students though a device known as a book. This is the reason students are forced to spend so much time around them. Smart students protect their knowledge though the use of arcane objects such as the gravity bong and beer bong and rituals known as the toga party and the Rambo shot. Dumb college students know stupid shit like particle physics, history of African impearalism, and abstinence.

While staying in a dorm, show consideration for your neighbors. Some may be so depressed that they stare at various books for hours on end, in a vain attempt to end their own lives through information overload. Help these poor souls by sharing your music with them. Your neighbors will be thrilled to hear the gentle melodies of loud rap music at 2 a.m. And don't forget about exercise. Inventive pastimes such as playing football in the hallway are great ways engender to admiration in your peers. If you have a roommate, do your best to have sex anywhere between 3 or 5 A.M. so as to make sure your roommate doesn't go to sleep too early. Also, try to do it on the top bunk of a bunk bed so that the love juices can flow down onto your roommate's bed. He'll thank you for it later after he eats it because you'll have saved him from spending another meal at the dining hall. Finally, don't just play Halo Halo 2 Super Smash Bros. Melee Super Smash Bros Brawl Halo 3. Play Halo Halo 2 Super Smash Bros. Melee Super Smash Bros Brawl Halo 3 so loudly that everyone in a 5-mile radius will be aware of your pwnage. Video games are part of the pariah for being a cool college student. If you are not a gamer, you are a communist. I mean hardcore gaming, such as World of Warcraft and any blowing up destructo stuff. Wussy gay crap like the Sims and vintage Super Mario or Pokemon is not cool. Good stuff. If you are a girl, you can get by with playing Madden, but make sure you do not play the Cardinals vs Lions. Do not, on any account, ever learn anything at all that might be relevant or helpful to your life in the real world. Do, however, ignore all viewpoints you do not immediately recognize or agree with. You must also do drugs, drink (see above), and encourage your campus' bloated bureaucratic administration by becoming a "Resident Adviser" or by joining a form of student government.

Time Magazine has named as the five most prestigious colleges in the world: Middle Tennessee County School, Kumos Learning Center, the Gibbs Institute, Central Missouri Community College and sister school Ohio Valley Junior College. Tenured positions at either institution are so competitive that a snubbed would-be professor once remarked: "Damn, who do you have to blow to get a job here?"

Less prestigious colleges are collectively referred to as Ivy League schools, named for the ivy plant (ivyus plantus) widely considered a weed and waste of life by scholars and botanists alike, much like students at these low-ranking institutions. Ivy League schools are also known as "McBlowniversities" because so many of their graduates end up with low-paying jobs at fast food restaurants or working as transvestite hookers.

Various "Institutes of Technology" also exist: the Manitoba Institute of Technology (MIT) offers 1 - 3 year programmes in such promising fields as animal husbandry, agricultural design, and ice-road maintenance. Other "Institutes of Technology", such as the California Institute of Pyrotechnology (Caltech), offer nothing at all in terms of useful skill and exist only to keep certain segments of the population (such as "geeks", "hackers", and "geeky hackers") sufficiently well distracted that they can be safely ignored.

Occasionally a state decides it is wealthy enough to create its own pseudo-colleges, and ends up establishing eyesores like The Saint of Saints in St. Cloud State University of The Saint of Saints in St. Cloud, Minnesota. Named after the popular and studious The Saint of Saints in Saint Cloud of Minnesota in the late 50's, TSOSISCSU creates an atmosphere of homophobia and anti-Semitism in a state that definitely needs more of it. Lamenting eternally on their choice of location - central Minnesota - they attract the unsuspecting into the wasteland that is state education institutions (which are a bad idea because states cannot actually afford these universities)... except Texas.