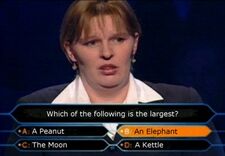 Edumacation is the process by which one becomes edumacated, the achievement of which is generally marked by a gradumacation ceremony. Edumacated people know a lot of things, though the process of how they came to know them mostly remains a mystery to onlookers.

To obtain an edumacation, one must first become a "student" by enrolling at a school. Various types of schools exist, such as nursery school, high school, and college. Choosing which type of school to enroll in, based on the current stage of your edumacation, can be difficult. It is often tempting to want to reduce the amount of time spent in having yourself edumacated by "skipping" nursery school and high school, and immediately enrolling in a prestigious university (such as Uncycloversity). However, if you are male, this may decrease your likelihood of obtaining sex during your edumacation. Since many of the female students at your university will be older than you, it is unlikely that they would find you physically attractive. However, if you are female, this should be nothing to worry about. For the self directed there are many channels to obtain tidbits of educmacation, they include; word of mouth, rap songs and folk music, internet forums, online video and role modeling. Some occurrences of channeled edumacation have been reported.