The Real World has been called the most elaborate hoax ever to be created. It is an almost mythical place where, or so the story goes, giant fiery globes are said to adorn the ceiling (true believers would call this the sky), resulting in "sunlight" which in turn causes all manner of green stuff to spring from the ground. Said to be populated with 'normal people', with 'social lives', the concept has a definite, undefinable allure, which may explain why the myth persists.

Despite overwhelming evidence to the contrary, there continue to be many believers in the "Real World" concept. Some people will go so far as to say they have visited this strange and clearly fictional place, and are often difficult to dissuade from this delusion. Rehabilitation is made still more difficult by the widespread nature of the hoax, with references to the real world cropping up almost everywhere you look on the internet.

The first documented evidence of the concept is near impossible to pinpoint, as believers will usually refer to the real world as having been around several billion years before the internet. Since this is obvious crap, scientists have had extreme difficulty in determining any kind of useful time frame. The latest studies have shown that delusions of reality are the worst thing since sliced bread, and are currently trying to ascertain the date of sliced bread's creation. 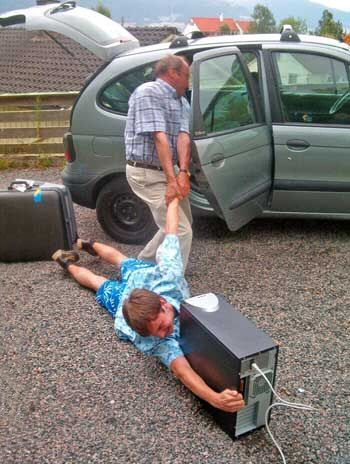 According to the legend, the Real World somehow can be accessed by finding a mythical button somewhere on a supposed box that somehow 'switches off'. Other wild rumours include 'getting up and going out of your bedroom.' It should be noted that in more primitive times these stories were taken very seriously. This "Off switch" was often located on a device known as a computer.

MMORPG games may often be confused with the Real World. Although they share similar characteristics, classes other than Nerds are often rare or non-existent.

Jocks are a sub-species of Men that work out often, and could probably kick your ass. They tend to attract Females more than Nerds, and have a lower rate of virginity infection than nerds. They also have a higher rate of STDs and tend to be just plain dumb. A jock starts out as a little asshole who likes sports and ends up getting our sacred country stuck in a damn war that will not end. They also go to state and get the shit beat out of them by ignorant inner city youth who cannot read Dr. Seuss but can shoot eight three pointers in one quarter. Almost 85 percent of jocks are white, but they have been known to eat beans like chicken and feel so horny.

People that often cry, listen to bad music, and sometimes cut themselves. It is hard for another class to change into an Emo. Doing so will often result in embarrassment. Not to be confused with Elmo, Emo is for people who cannot appreciate waking up in a safe country where there is abundant food and beautiful women. Emo kids often participate in the act of self-mutilation, in which they cut their own wrists or other places where major arteries run with a razor blade. If done correctly, they will actually die, but most are just pansies looking for attention. Should you encounter an emo on the street, feel free to beat the shit out of them. Emos gain experience points and level up by being hurt, rather than hurting others, so remember, you're only helping him out. They also usually look a lot like stoners, but with sleeves.

Not to be confused with Rock Stars. Rockers enjoy listening to Rock, Heavy Metal, and often Alternative Rock, Classic Rock, or Punk. They tend to congregate at events called "Rock Concerts," where other rockers are numerous. Rockers experience the purest form of freedom; the right to listen to loud noise that makes no sense for days on end. If a rocker says he rocks out with his cock out, then they have mastered the class and are unable to change to a different one. However, if they jam and do not tend to give a damn, then there is still hope. (see God)

Gangstas often listen to rap music, and have similar beliefs as Rockers. The main difference is that they worship only one High God, the God of Rap. Most rappers are black, but some may be white, yellow, or even green. These rappers are often impersonating Black People. Rap is one of the greatest art forms to ever come out of the toilet. Advocating murder, rape, and ignorance is just what young inner city youth have needed since 1927. (see Satan)

Very similar to nerds in many ways. They mostly exist outside the real world and only come out to get in your way, say unintelligible things and sometimes go on vacation. Old people are unable to comprehend anything made in the last half-century. If confronted by an old person the safest thing to do is ask them what it was like in the past and then slowly walk away as they drone on. Contrary to popular belief they will not appreciate it if you help them across the street. If you ask you will get fo sho shot(same goes with gangstas)

Many of the above classes of people, except for Old People (although this is changing is the baby boomers age), also belong to a distinct suborder known as potheads. Members of this order are characterized by unique styles of clothing and grooming, or the complete lack thereof. An image of a five-pronged green lightning bolt is frequently associated with potheads (Chronic and Bluntman, 420), although its true meaning has yet to be ascertained. Potheads are often found in the mirror.

Ongoing research is being done to gain information on other Human Subspecies. These other species may be endangered or emergent species.

Not to be confused with the Teal World (which is a show about a largely uninteresting colour) The Real World is a TV show where narcissistic and repulsive young American people find that their inability to empathise and socialise with other people coupled with their enormous self love predictably leads to lots of crying and faux nervous breakdowns. Trisha Cummings is a classic example of being the bitchy slut. After a period of two days known as the honeymoon period it is compulsory for all the black members of the cast to prove that they are capable of being nastier than their white counterparts because they ostensibly claim to come from a place known as 'the street' or 'the ghetto'. This is equally inevitably met by the middle class white members of the cast pretending to come from a slightly more squalid background than is actually true. This phenomenon is known either as 'blacking up' or 'whiting down'. It should be noted that the current series (Real World: Denver) has broken some of the shows stereotypes by having no fuckable women (all 3 being busted alcoholic hosebeasts) in the cast and having a black male member who is not interested in claiming any affiliation to 'the street'. However Brooke has a tendency to cry at everything because she is bi-polar.